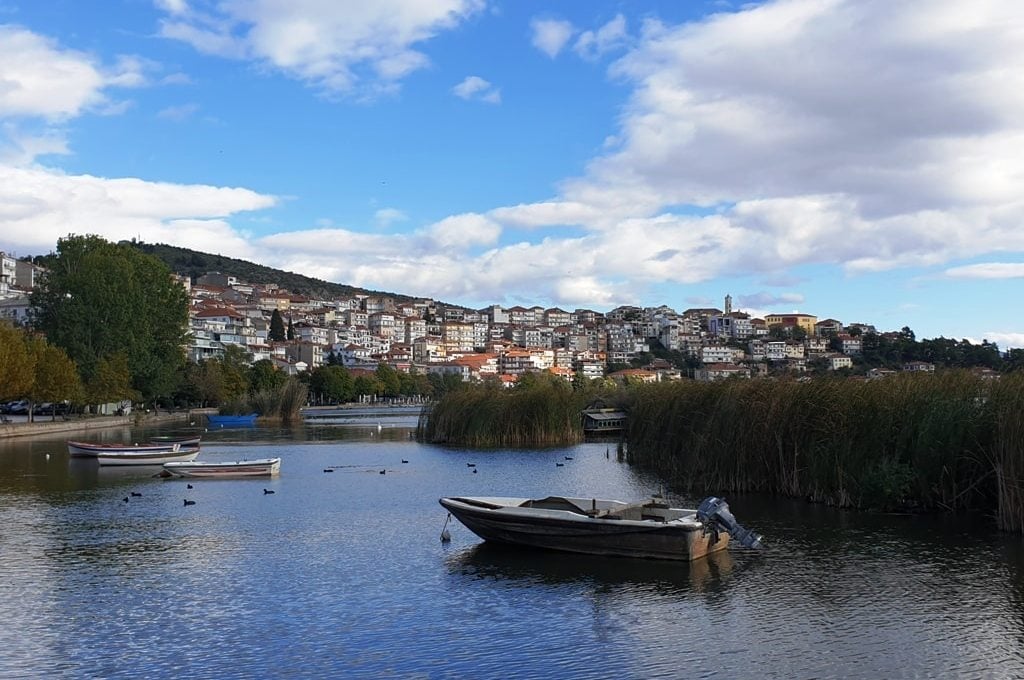 Kastoria is located in the western region of Macedonia, in the north of Greece. It is a mountainous region full of Byzantine churches, Ottoman villages, and beautiful lakes. The city is located on a lake, nestled in between the limestone mountains, and has been in the same place since the 10th century. It was likely founded as a trading city; it was definitely a merchant city by the 14th century when it became known as a centre for fur trading.

Today Kastoria is a bustling city with a population of around 20,000 known for its ongoing fur trade, Byzantine architecture, and outdoor activities.

A Guide to Kastoria Greece

How to Get to Kastoria

Renting a car is recommended in order to explore Kastoria and the surrounding area.

Where to Stay in Kastoria

Things to See and Do in Kastoria, Greece

There’s plenty to see and do in Kastoria, from exploring the lake and some of the natural features in the mountains to visiting archaeological sites and traditional architecture. Here are my recommendations for what to do in Kastoria, Greece.

Lake Orestiada is the lake on whose shores Kastoria lies. The city stretches across a small isthmus to an island in the middle of the lake, so there are two shorelines to explore. Start from the southernmost shore and walk along to the northernmost, where you’ll see a variety of birdlife and a number of the city’s famed mansions.

Lake Orestiada is known for its birdlife, having nearly 200 species of birds, so if you are a birder this is a great place to visit!

The Dragon’s Cave is situated on the shore of Lake Orestiada, not far from town. It features seven underground lakes, ten chambers and five tunnels. Visitors can walk the 35m access tunnel into the cave, which doubles as an information centre for the cave system, before walking a 300m route through the caves.

Visit the archaeological site of Dispilo

Dispilo is a Neolithic settlement on the southern shores of the lake at Nisi. It was discovered in 1932 when the lake level fell and the remains of wooden posts became visible. The houses are a mixture of circular and rectangular and were made from timber frames with reeds and clay.

There is a reconstruction of the house type, which gives visitors a great insight into the Neolithic culture. Among the findings at the site were pottery and tools, including fish hooks and obsidian arrows.

The city’s museums highlight the many stories of Kastoria. Explore the Byzantine Museum in Dexameni Square, which displays artefacts like iconography, sculptures, and paintings. In the Folklore Museum, visitors can see items related to the culture of the Kastoria and Macedonian region, like costumes, household items, and more.

At the Museum of Macedonian Struggle, which is located in an old mansion belonging to Anastasios Pehion, a teacher and fighter against the Ottomans. The museum details the revolutionary movements during the Turkish rule.

Check out the Byzantine Churches

There are more than 60 Byzantine and post-Byzantine churches in and around Kastoria, dating from the 9th to the 19th century. Kastoria is an important site in Greek Orthodoxy and is the home to a Metropolitan Bishop. While I can’t name all the churches, here are some of the most important that you should make an effort to visit:

Panagia Koumpelidik is one of the oldest churches in Kastoria, although no one knows exactly how old it is. Archaeologists have dated it to between the 9th and 11th centuries, while the interior decor dates to the 13th century.

St Athanasius of Mouzaki is a 14th-century church built by two Albanian brothers. It is notable that it was the last church built before the Ottoman annexation. The paintings inside depict Jesus and Mary in imperial costume – the first instance of showing the Virgin Mary as a Queen – and also St. Alexander as a soldier.

The monastery of Panagia Mavriotissa, built in 1802, is located on the lake and highlights a series of murals depicting Byzantine emperors.

Marvel at the Beautiful Mansions

The mansions of Kastoria reflect the economic boom that the city enjoyed in the 17th and 18th centuries, under the Ottomans. In the Doltso and Apozari lakeside districts, you can still see a number of the old Greek mansions, although during its heyday Kastoria also boasted mansions owned by Turks and Jews.

These two neighbourhoods are among the best-preserved and most traditional neighbourhoods. Many of the mansions are still named for their original owners.

Wander Through the Abandoned Villages of Korestia

The villages of Korestia are a series of old Macedonian villages north of Kastoria in the foothills of the mountains. They consist of a few hundred buildings made in the traditional red brick manner, all abandoned and in various stages of ruin. A walk through the villages makes for a delightful day out and a glimpse into the early way of life in this area.

Nestorio is a small town near Kastoria. It is most famous for the Nestorio River Party, a rock festival held every summer on the banks of the Aliakmon River. The festival attracts a few thousand people and a variety of Greek and European rock bands.

Check out the Nearby Village of Nymfeo and Arcturos

Nymfeo is a traditional town on Mount Visti. It is considered one of the most important towns in northern Greece and was revitalised with the help of the EU in 1995.

Today visitors can dine in traditional restaurants, stay in traditional hotels, and explore a small traditional village. Arcturus is an NGO dedicated to the protection of the brown bear and the grey wolf. It is located in Nymfeo village, where they also have a brown bear sanctuary.

Skiing in Vitsi is a popular local activity. With 2.6km of trails and 3 lifts to get skiers up the mountain, Vitsi offers a relaxing and casual day out from the city.

Where to Eat in Kastoria

Palia Poli: Palia Poli is a gorgeous waterfront restaurant set in an old mansion with a spacious courtyard. The menu is traditional Greek

Ntoltso: Ntoltso is a family-owned restaurant in the centre of the city. It serves traditional Macedonian food.

Have you been to Kastoria? Did you like it?