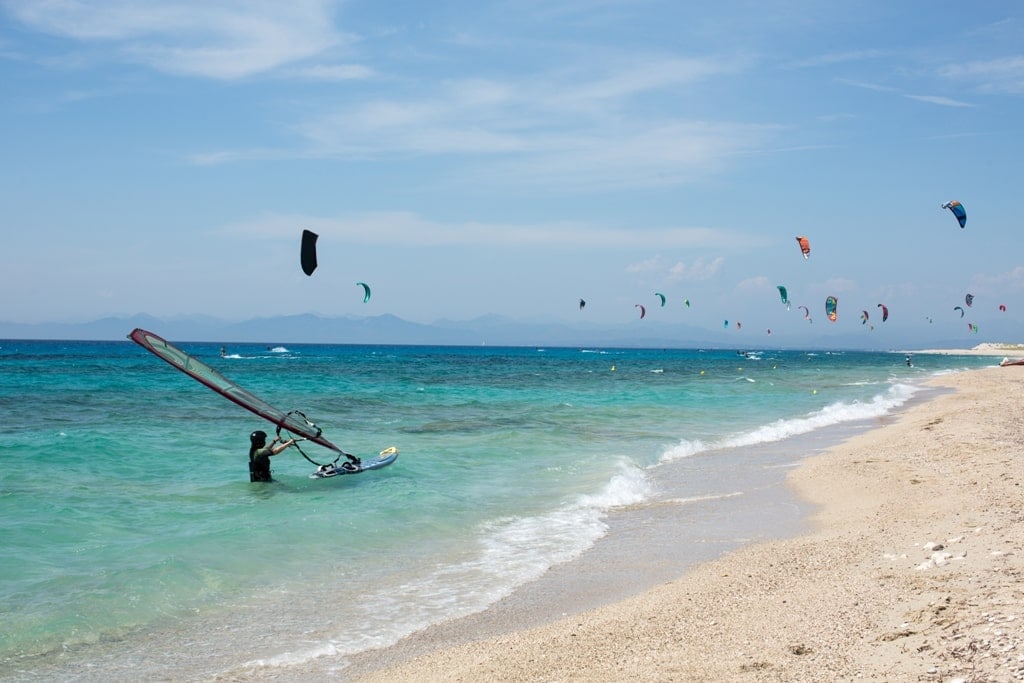 When you think of surfing, places like California, Morocco, and the Philippines are likely to spring to mind – not so much Greece. And there’s a reason for that. Surfing just isn’t that popular among its 6,000 islands and miles and miles of coastline. However, you can still do it here, as well as exciting variants such as windsurfing and kitesurfing.

Greece actually has pretty good conditions for board sports, and the seas are pretty safe. It’s also a great place for stand up paddleboarding, if you’re looking to do a board sport that’s a little more peaceful and relaxed.

In this post, we’ll take a look at five of the best places to kitesurf and surf in Greece. It should help you to plan your next vacation!

Best Islands to Kitesurf and Surf in Greece

Naxos is the largest of the Cyclades islands and one of the most popular windsurfing destinations in Greece, especially during the summer months. Thanks to winds coming from the north called meltemia, the conditions for windsurfing are perfect!

Windsurfing is more popular than regular surfing here, and there are several shops on the island where you can rent or buy gear. Around the island, there is a total of eight windsurfing clubs! The two best-known clubs are at Plaka and Sahara Beaches. The other beaches where you can practice windsurfing include Agios Georgios (Floisvos), Mikri Vigla, and Laguna.

If you want to just do regular surfing, the best spot is Ayiassos.

Whichever you want to do, check out the range of surfing and windsurfing clubs on Naxos to get beginner lessons and feel the warm blue waters of the Aegean Sea on your skin – or through your wetsuit!

Check out: Best beaches in Naxos.

Paros is known for its beautiful beaches, many of which have golden sands and calm blue waters. However, head for the southeast of the island and those waters are a little choppier. The perfect conditions for water sports!

While Paros has a surf club, it’s more windsurfing here that is so popular. In fact, the PWA World Cup Championships take place on the island, attracting the finest windsurfers in the world.

Thanks to the northern winds that blow over the Cyclades islands in summer, there are many spots on the island that have ideal conditions. The most popular beaches include Golden Beach and New Golden Beach, while Santa Maria and Pounda Bay also attract a lot of visitors.

There are several windsurfing centres at Paros’ beaches where you can rent or buy equipment and take beginner lessons.

Check out: Best beaches in Paros.

Lefkada is in the Ionian Sea just off Greece’s mainland. It’s so close you can drive to it which is great news if you’re bringing water sports equipment along with you. Whether you want to do kitesurfing or windsurfing, there are two beaches on Lefkada that you can’t miss.

Ponti Beach, also known as Vassiliki, is said to be one of the best beaches in Europe for big waves and strong winds. The wind here is known as “Eric” and the winds gradually grow stronger throughout the day until – so the best conditions are in the evening.

Another beach Agios Ioannis, has steady weather conditions that are good for surfing, and Milos Beach has a kitesurfing competition organised by local people. There are several kitesurfing and windsurfing clubs at all three of these beaches, so it’s easy to rent equipment and get some lessons if required.

Check out: Best Beaches in Lefkada.

Located between Thassos and Lesvos in the Northeastern Aegean, Lemnos is one of the most underrated islands in Greece. Keros Beach, on the western shores of the islands, is one of the best places to do water sports in the entire country. As well as surfing, kitesurfing, windsurfing, stand up paddleboarding and kayaking are all available.

The turquoise waters of Keros Bay are shallow and the waves are big enough to surf. The winds blowing from all directions, including the famous meltemia which we mentioned before, in the summer months between May and September.

Keros Beach has a surf club where you can rent equipment and get beginner lessons on all of the sports mentioned above. There are also a whole host of accommodation options nearby suitable for all budgets.

If you’re not already convinced that Lemnos is the Greek island where you can learn to surf, you might be interested to know that it’s also one of the cheapest islands in Greece!

Named after the mythological character Icarus, who flew to close to the sun and fell into the sea nearby (according to legend at least), Ikaria is known as the island where people forget to die. Might sound a little morbid, but it the place with one of the top four life expectancies in the world!

The most popular beach for surfing on Ikaria is called Messakti, and it’s located on the north of the island. The best time to surf here is in August, where the conditions are perfect. Yes, that is the technical term.

There’s a surf school which offers affordable rentals, lessons, and you can give stand up paddleboarding a go too, should you wish to. The school is working towards an alternative and sustainable tourist approach, and there are even packages which combine yoga, jiu-jitsu and calisthenics with surfing. Check it out!

Once you’ve finished surfing for the day, you can sample some of the delicious food on Ikaria. Some of the secrets to the residents’ longevity are hidden away in there!