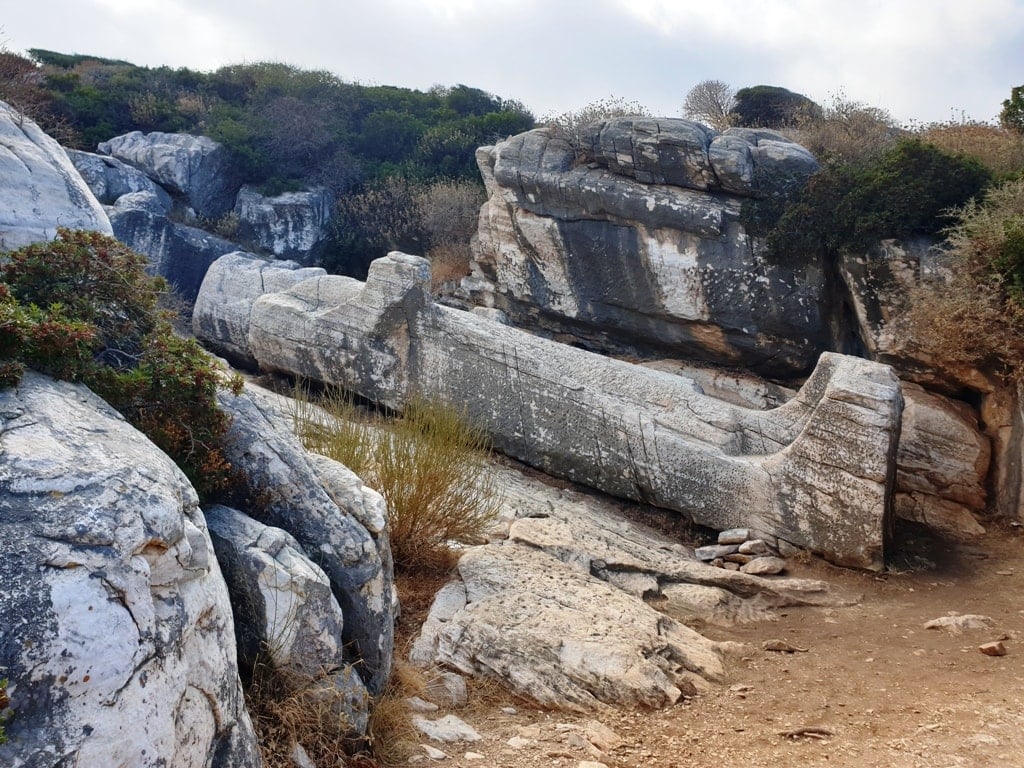 Among the many cultural sites that one can visit on the island of Naxos, the Kouroi are indeed some of the most impressive. A Kouros is a neologism, a modern term used to describe free-standing ancient Greek sculptures that appeared for the first time during the Archaic period in Greece and represent nude male youths.

Modern excavations on the island have brought to light some of the most monumental statues of antiquity, that does not fail to attract the attention of every true lover of ancient art.

The best things to do in Naxos

Portara, Naxos: The Temple of Apollo

Best Villages to Visit in Naxos

A Guide to Apiranthos, Naxos

Naxos or Paros? Which Island Is the Best for Your Vacation?

Best Ιslands to Visit Near Naxos

The Kouros of Apollonas, also known as the Colossus of Dionysus, is one of the most impressive surviving kouroi on the island of Naxos. The statue is  10.7 meters (35 feet) in height, made of light grey Naxian marble, weighing approximately 80 tons, and built around the turn of the seventh and sixth centuries BC.

It was originally believed to pay homage to Apollo until the 1930s when archaeologists noticed its beard and realized the figure might actually represent Dionysus. The work was unfinished and abandoned, possibly because it was impossible to transfer or because it had already cracked in several places.

The shape of the body, head, beard, and ears is still easy to be distinguished, while one can also still see the holes left behind by the sculptor’s chisels, pickaxes, and hammers. It is located in an ancient quarry near Apollonas, a small town in the northern part of Naxos.

The fact that construction of the gigantic temple of Apollo at Portara, overlooking the present-day port of Naxos, is considered to have started around the same period as the date of the statue, has raised some questions whether the Kouros was somehow linked with the temple. In any case, the statue, lying in the supine position, is one of the most popular attractions on the island.

You can visit the Kouros of Apollonas on this Naxos Island Full-Day Historical Bus Tour that includes a visit to the villages of Halki, Apiranthos along with a visit to the big Kouros in Apollonas Village and the temple of Demeter.

The greater Flerio area was considered to be one of Naxo’s two main marble quarrying areas in antiquity, besides the area of Apollonas.

Today, here one can see many remnants of quarrying activity, such as wedge-slots and holes made with a chisel, but the main attraction is considered to be the two oversized Kouroi, dating around 6th century BC. Both Kouroi are unfinished, again due to accidents during their transportation.

One of the statues lies in the shade of a rural garden, and it is 6 and a half meters tall. It is dated around 570 BC, and it is more detailed than the one that can be found near Apollonas. It is unfinished since hardly any work with chisels can be noticed on it.

The kouros was named “Ellinas” (Greek) as it was thought to embody the virtues of the race and the ideal physical and personality traits a young male should have.

In a close distance, another kouros lies in the quarry. This statue is also known as Kouros of Potamia or the Kouros of Faranga. It is located about halfway up a 300-meter high marble outcrop and is 5.0 meters long.

The figure also lies on its back, a few meters away from where it was originally cut. The face is missing, scratches are seen in a lot of places, while its roughly worked feet lie nearby, artfully mounted on a modern concrete foundation.