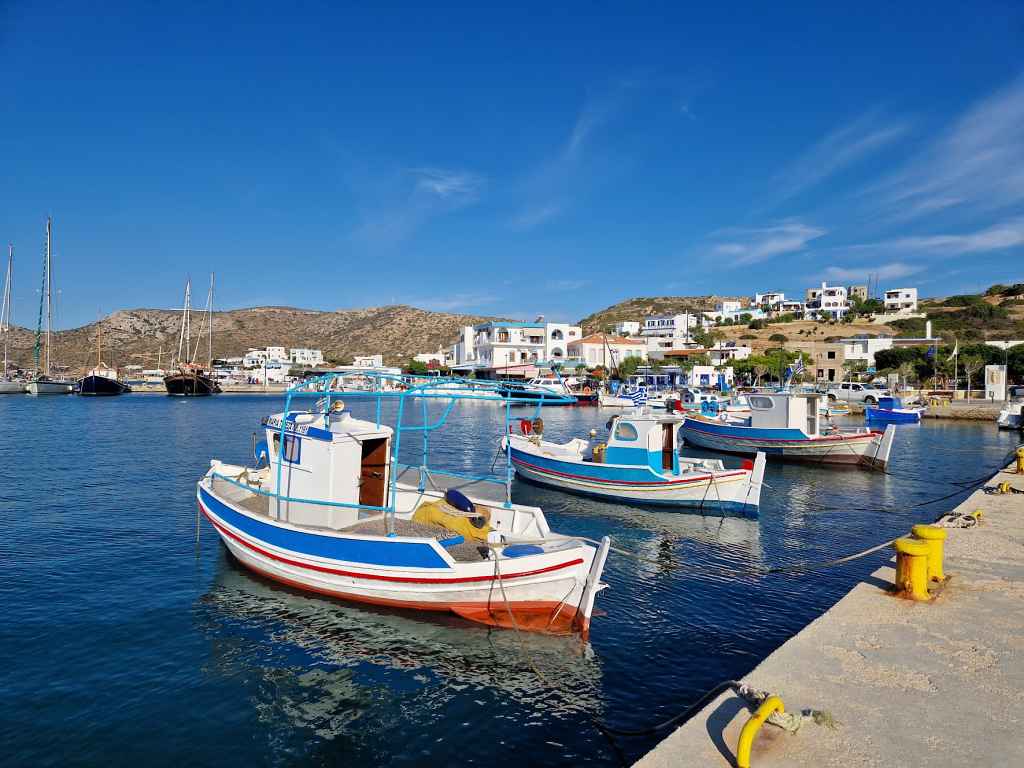 If you want to discover a hidden paradise, there’s no place better to do it than on the tiny island of Lipsi, in the Dodecanese, Greece. Hidden away from the big brunt of tourism, this Greek island is completely unspoiled in every sense: there are virgin beaches, gorgeous landscapes, great traditional food, and good people to enjoy. The perfect place to relax, recharge and get in touch with some of the most beautiful natural environments you can find.

Lipsi is truly a treasure to be discovered, and with this guide, you will know everything you need to make the most of an amazing vacation!

Disclaimer: This post contains affiliate links. This means I will receive a small commission if you click on certain links and subsequently purchase a product.

You will find Lipsi between the islands of Patmos and Leros. In reality, Lipsi is a cluster of tiny islands, with the biggest one lending its name to all the others. Its location makes it remote enough to remain pure and unadulterated in its gorgeous landscape and lush natural environment but close enough to be easily accessible by boat from Leros or Patmos.

The best time to visit Lipsi is summer, which for Greece starts from roughly mid-May and lasts until late September. The peak tourist season is July through August, though you’re not likely to have to deal with huge crowds at Lipsi. Still, you might want to opt for early September if you’re going for full authenticity and quiet, as Lipsi is a prime day trip for a lot of tourists during peak season. The sea tends to be its best in early September as well.

How to get to Lipsi

The only way to get to Lipsi is by ferry. But you can cut travel time significantly if you first take a flight to Leros and then catch a ferry to Lipsi.

The direct ferry from Piraeus to Lipsi is roughly 8 to 9 hours long, so if you opt for that, make sure you book a cabin. The flight to Leros from Athens airport Eleftherios Venizelos is only 50 minutes. Then, the ferry from Leros to Lipsi is another 40 minutes, cutting the overall travel time to just under two hours.

Click here for the ferry schedule and to book your tickets directly.

or enter your destination below:

A brief history of Lipsi

According to mythology, Lipsi was the island where Odysseus, the legendary hero of cunning from the Trojan war, was marooned and then kept captive by Calypso, the powerful witch. He stayed there for seven years before the gods ordered Calypso to let him continue his journey toward Ithaca and his kingdom. Homer describes Calypso’s domain as a gorgeous place fit for gods, and that description applies today, still!

Historically, there is evidence that Lipsi has been inhabited since prehistoric times. Evidence shows that the island had become quite wealthy by the 1st century BC. Its inhabitants converted early to Christianity, which is why there are quite a few churches to be seen on such a small-sized island.

The oldest surviving church dates from the 8th century AD. Lipsi became part of the territory belonging to the famous monastery of Patmos for nearly 6 centuries before falling to the Turks in the 16th century. Despite it now being part of the Ottoman Empire, Turkish populations never actually settled on the island.

During the Greek War of Independence of 1821, Lipsi served as a shelter for Greeks fleeing the wrath of the Ottoman Empire, as well as a protected port for battleships of all kinds.

Like all of the Dodecanese, after the war, Lipsi was returned to Turkey until 1912, when it passed to the Italians. Finally, the island was reunited with Greece in 1948 as the rest of the Dodecanese. It remains partly under the jurisdiction of the monastery of Patmos.

Things to do in Lipsi

The best way to get around at Lipsi is on foot! The island is small enough to allow you to walk everywhere and take in the gorgeous surroundings. If you aren’t a fan of walking around to places, there is a van and taxi service that can take you everywhere. You can also rent a scooter or a bike. No matter how you choose to move around at Lipsi, here is a short list of what you should make sure to see and do while you’re there:

Lipsi’s main town (or Chora) is the biggest one on the island and has its only port. Explore the town before you follow its road paths to Lindou beach and Plati Gialos by going uphill towards the “old town” or “Horio” where the atmosphere is timeless and deeply traditional. There are whitewashed houses, picturesque paved pathways, and beautiful churches to enjoy.

Make sure to visit Kastro, the ancient acropolis of the island of Lipsi. There isn’t much left of the ruins from likely the Roman times or even earlier, but what you will be rewarded with is a sweeping view of the island and the Aegean sea.

Church of Theologos: This is the biggest and most central church in Lipsi. Its beautiful colorful exterior, impressive bell tower, and wide yard are a great setting for photos. You can also take in the beautiful view of the island and the Aegean. The church was built in the 1930s in the Russian style, with a beautiful carved wooden iconostasis. Take a moment to admire the iron-cast altar with scenes from Jesus’ life.

Church of Aghios Stathis: This is a tiny, lovely chapel in white and blue that seems to be wedged between two beaches, Hohlakoura and Tourkomnima. Great for a bit of a respite.

Church of Panagia tou Harou: This is one of the oldest churches on the island, built in the Byzantine style by monks from Patmos in the 1600s. The name means “our Lady of Death,” which comes from the uniqueness of the icon it houses.

This icon is supposed to be miraculous and depicts the Virgin Mary in the typical position of holding the baby Jesus. However, instead of Jesus, she is holding the Holy Cross. The icon symbolizes the grief and mourning of Mary after having to witness the pathos of Jesus Christ and his death and is extremely rare.

This museum is relatively small, but it holds quite a few interesting and notable collections. There are exhibits from the island’s ecclesiastical history, such as 16th and 17th-century icons and religious vestments and utensils, exhibits from the island dwellers’ day-to-day living, such as tools, household items and folk costumes from past centuries, and archeological collection with exhibits spanning the island’s vast history, from the Mycenean to the Early Christian times. It’s well worth a visit, and it feels like visiting many museums wrapped up into one.

Lipsi is renowned for its gorgeous beaches! Expect most, if not all, of these beaches not to be organized, so make sure you have what you need with you. Here are the ones you must go to:

Lindou beach: This is a beautiful beach quite close to the harbor, known for its shallow, crystal-clear waters that make it perfect for families. It is also semi-organized since it receives the most people and is popular with tourists enjoying their day trip to Lipsi.

Platis Gialos: This is a stunning beach, considered one of the most beautiful on the island, in a natural cove 6km north of Lipsi’s Chora. Make sure to go on a day that isn’t windy, and keep an eye out for the duck families that may share a swim with you!

Kambos beach: This beach is a close competition for the most beautiful one in Lipsi. It is sandy, with sapphire waters and trees to offer shade. It is quite popular as it is close to Lindou and you can walk to it within 15 minutes.

Katsadia beach: This small, secluded beach in a natural cove is known for the variety of its shoreline, as there are many little coves to swim to and explore. It is completely unorganized and perfect for those seeking peace along with beauty.

Hiking is a popular activity in Lipsi and an excellent way to get to know the island. There are several pre-designed paths for you to take that include the island’s various sights, such as the churches or the natural beauty of the various beaches and other landscapes. You can also explore these routes on a mountain bike if you’re feeling adventurous.

Do some horseback riding.

Take an unforgettable boat tour aboard one of the traditional island caiques and visit all the tiny but gorgeous, uninhabited islands that are part of Lipsi. Take a tour around Makronisi, Aspronisi, Tiganakia, Marathi, and Arkoi, and just bask in these unspoiled, pure beaches and crystal-clear waters.

Arm yourself with sunscreen and a hat, and enjoy each island’s uniqueness: Makronisi has gorgeous, impressive caves you can swim to and take photos of.

Aspronisi, which means “white island,” takes its name from its stunning white sand beaches, where you will be able to lounge and sunbathe. Tiganakia (the name means “small pans”) is where you will get to swim in the most exotic turquoise waters.

Marathi is home to just three families and a great taverna, where you will be able to enjoy home-cooked, delicious lunch. Finally, Arki, with just 50 people as its dwellers, is where you can enjoy the best coffee of the day at the local café.

Lipsi is known for its pure taste and fresh, tasty produce. Here, taverns only work with what is fished from the sea and raised on the island, so make sure you try the local seafood (especially crayfish) and the meats (especially lamb and goat kid). There are also two local kinds of cheese, touloumotyri and mytzithra. They’re both soft and have a distinctive taste.

There are also local dishes and delicacies you shouldn’t pass up, such as pitaroudia (crispy patties made of various combinations of herbs, spices, and vegetables) and favokeftedes (deep-fried croquettes made of split yellow peas). Finally, don’t miss out on tasting the local honey!

Lipsi island was known for generations for its local wine variety Fokiano. You can taste it today at the Lipsi Winery, where three different wines, rose, red, and white, are created from Fokiano grapes, with international awards to their label. Fokiano grapes are said to be directly related to the ancient grape variety of Pramnios that made the Pramnios Wine of ancient times.

Take a tour around the winery and taste the wine while enjoying a gorgeous view of the Aegean and the whole of Lipsi island.