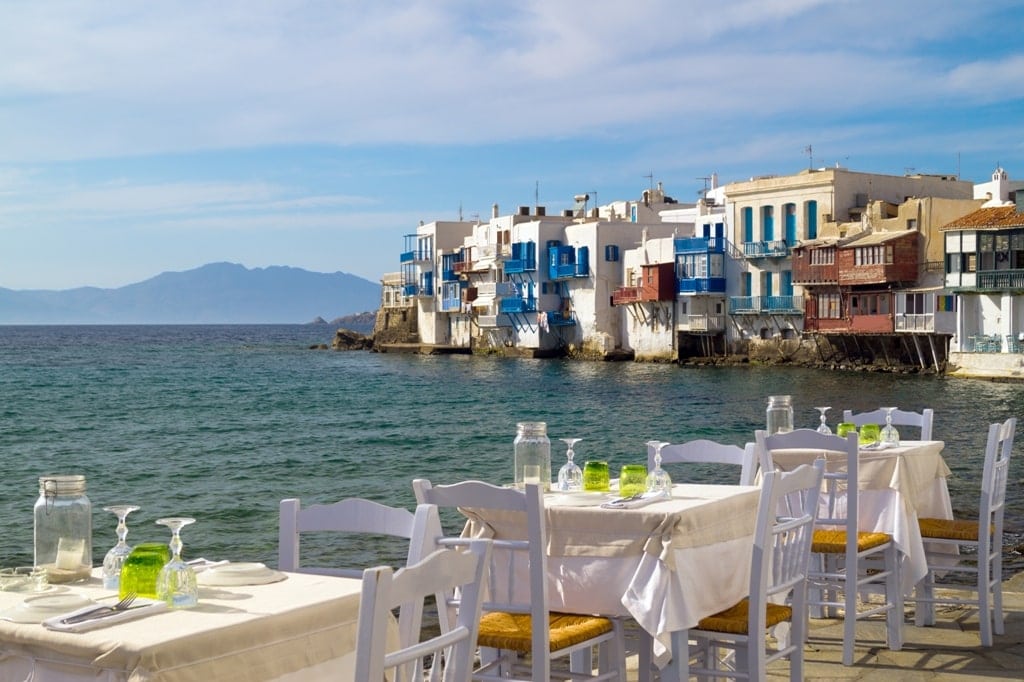 Mykonos is easily one of the top tourist destinations in Greece. It is not only part of the Cyclades, the most popular Greek island group for the summer, it is one of the two most well-known Cycladic islands together with Santorini (Thera).

There are a lot of things that make Mykonos so popular: its thriving cosmopolitan flair that mixes well with local traditional color and iconic sugar-cube houses, churches with blue domes overlooking the Aegean, renovated windmills dating as far back as the 16th century offering breathtaking views of the sea and the other Cycladic islands surrounding Mykonos, good food, great beaches… and Little Venice.

Little Venice may be one of the most famous places to visit in Mykonos, and with good reason! It’s colorful, it’s traditional, it’s literally hanging right over the waves of the sea, and it’s easily accessible among other things.

There are many things to do, see, and enjoy in Little Venice, so here are all the things you should know to maximize your experience there!

Where is Little Venice?

Little Venice is located in the western part of Mykonos’ Chora, the main town of the island. You could think of it as a ‘suburb’ of sorts that exists right at the waterfront of Chora and you can easily walk there. The most straightforward route is to take the road leading to the famous windmills and follow it to Little Venice.

Originally, the area was named Alefkandra, after the nearby beach. However, like the houses that comprise this area of Mykonos’ Chora were built by merchants inspired by Venice, they started giving the district more and more a Venetian feel.

The colorful houses are right at the edge of the waterfront, with balconies hanging over the sea. There are arches and byways that are built in the Venetian style. This gave the impression to anyone visiting and enjoying the view from there that they were in one of the canals in Venice. Hence, the name “Little Venice” stuck for the district!

Planning a trip to Mykonos? Check out my guides:

How to spend one day in Mykonos.

The best islands near Mykonos

Things to do in Mykonos

How to get from Athens to Mykonos by ferry and plane.

A brief history of Little Venice

During the 13th century, Mykonos was part of important Venetian trade routes. Traders and sailors stopped at Mykonos to replenish supplies and continue on to Italy or the East, depending on their direction.

Up until the 18th century, when the Ottomans occupied the island, the Venetian influence and aesthetic continued to inform and influence Mykonos.

Especially in the area of Little Venice, the architecture itself changed to reflect these influences: the houses are colorful with characteristic fronts to the sea, designed to be right over the waves with overhanging wooden balconies and arches.

Though originally most of the houses built were fisher houses, they acquired a different flair and grandeur to them which has become popular with tourists today.

There are some accounts that during the 17th and 18th centuries the spot of Little Venice was excellent for piracy purposes, and the seafront houses were used to load ships with stolen goods and that the fishermen and merchants owning the houses were the actual pirates, but we will never truly know!

Whatever the case, even the Ottoman rule didn’t erase the Venetian influences from this part of Mykonos, nor the rich history of it has been a trader’s hub.

Little Venice today is one of Mykonos’ hot spots for tourists and Greeks alike! Because it is so amazingly popular, it is one of the places that ‘never sleep’ despite being on an island. There are always shops, bars, and restaurants open no matter what time of the day it is.

The area has undergone thorough renovations since the 1950s, and now boasts several beautiful seaside restaurants and cafes for you to enjoy your meal or coffee while overlooking the sea. Most of these are respectful of the historicity of the buildings housing them, so you will be surrounded by the history of Little Venice as you enjoy the views of the windmills and the glistening waters.

During the night, Little Venice lights up and becomes a vibrant hub of partying, music, and nightlife in general. It is definitely the place to be if you like high-quality cocktails, different types of music, and the opportunity to go bar-crawling without covering much of a distance from place to place!

Just like in Santorini (Thera), the sunset is an extra, unique treat that you can enjoy in Mykonos’ Little Venice like nowhere else.

Make it a point to have your evening coffee or your cocktail at a seaside café or bar, while the sun slowly sets over the waves of the Aegean in Little Venice. The sun immerses itself in the horizon, making the sea iridescent with a kaleidoscope of colors, and giving you a rare light show against the house fronts. What better way to herald the coming of the night and the excitement that follows with it?

Mykonos is generally renowned for offering romantic getaways but it’s Little Venice that takes the cake.

Walking through its century-old side streets and pathways, being immersed in the light aroma of the bougainvilleas, surrounded by the colorful doorways and stairways of the fisher houses that hail from older times, gives you the perfect backdrop for a getaway just for two.

The fact that the world-class, fine dining restaurants completely respect the aesthetic of Little Venice adds just enough modernity for when you’re ready for your romantic dinner for two exactly the way you want it to be.