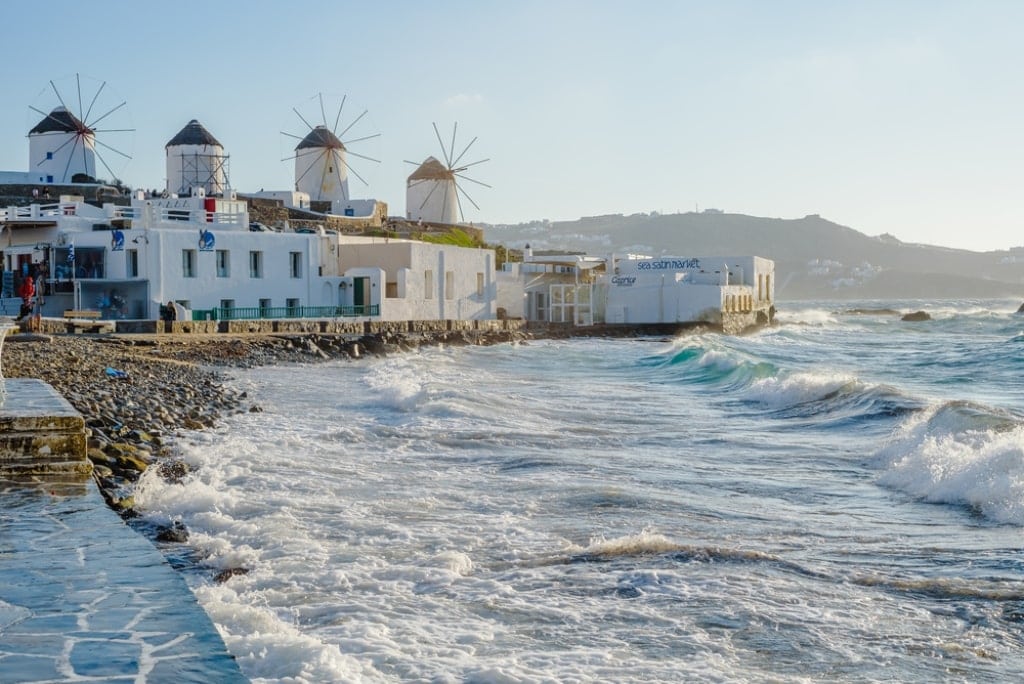 Going to a Greek island for summer is considered a dream vacation for most of the world. And it should! Greek islands are gorgeous places with some of the cleanest beaches of the world, iconic and picturesque architecture unique to them, and beautiful vistas and landscapes.

Everything in a Greek island seems to be designed to give you unforgettable experiences and precious memories of a unique, fascinating place of beauty, history, relaxation, and hospitality.

What you should be aware of and prepare for as you design your dream Greek island vacation, however, are the seasonal Meltemi winds of Greece. If you know about them and are ready for them, they will become part of your amazing experience. If you aren’t, they may become reasons for problem solving you could have preempted.

What are Meltemi Winds?

Meltemi winds are summer northern winds. They are very strong, dry, cool or chilly, and appear mostly in the Aegean. Meltemi winds give low humidity and high visibility.

In the ancient times, Meltemi winds were called “Etesia” which means “annual” for their annual summer nature. The origin of the word “Meltemi” is debated. Some say it is of Turkish origin, others of Latin, meaning “bad weather”.

Dwellers of the Aegean islands are all familiar with the Beaufort scale, which measures the strength of winds, and with good reason! Meltemi winds average around 5-6 Beaufort, but they can and often do get as high as 7 or 8 Beaufort. On particularly intense days, Meltemi winds can even reach 10 or 11 on the Beaufort scale, especially in the island of Tinos and the Cyclades in general. Tinos wasn’t randomly nicknamed ‘the island of the winds’!

Customarily, Meltemi winds will come from the north, north-west, or north-east, depending on where you are experiencing them from. Their current is related to the difference in pressure systems between Turkey (with a low-pressure system) and the Balkan/Hungary area (with a high-pressure system).

Meltemi winds are also closely connected to the monsoonal system that overtakes Asia, though they are not monsoonal themselves.

Meltemi winds generally occur the most in July and August, though they can have an early onset in June or, very rarely, late May, and last to September. However, May, June, and September are known as the least windy months of the Greek islands, which you can keep as a rough rule of thumb.

The Pros of Meltemi Winds

The biggest asset of having Meltemi winds in the Cyclades and the Aegean in general is that they cool down the relentless heat of the height of Greek summer.

Especially in July and August, temperatures can climb well above 35 degrees Celsius. During heat waves, it can get even a couple of degrees higher than 40 degrees Celsius.

The Meltemi winds cool down this effect and make summer in the Greek islands is not only bearable even during heatwaves, but pleasant.

In fact, locals look forward to and wish for Meltemi winds in order to weather the summer comfortably.

If you are a lover of windsurfing and windsailing, then you will love Meltemi winds as they offer excellent opportunities to engage in your sport on a nearly daily basis. In several islands of the Cyclades, especially in Tinos, Naxos, and Paros, there are dedicated beaches for windsurfing, as in several of the Aegean coasts from Chalkidiki to Rhodes and even Crete.

The Cons of Meltemi Winds

The major setback that Meltemi winds can cause you is scheduling changes. When the Meltemi winds are strong enough, small boats and even ferries will either delay or cancel and postpone their itineraries altogether for safety reasons.

Meltemi winds can be incredibly dangerous if you’re out at sea, because they can start suddenly without much warning as well as become stronger without notice. So, usually expect delays and rescheduling to happen if the Meltemi winds strengthen above 6 on the Beaufort scale on the average.

If the winds blow at around 9 Beaufort, Greek law prohibits all ships under a Greek flag from sailing. This law was established after a tragic accident of the ferry ship Herakleion in 1966, which sailed out with 9 Beaufort, but the winds strengthened to 11 Beaufort and caused the ship to capsize and sink, killing more than 200 passengers on board.

Sailing with Meltemi winds of up to 7 Beaufort is safe, but it will dramatically rock the ferry and cut the ferry’s speed, so if you are prone to seasickness it will not be a fun experience for you.

Lounging on the beach with above-moderate Meltemi winds can also be annoying or uncomfortable if the beach is sandy. This happens because the winds carry the sand and literally throw it on you, which results to sand bouts in your face.

Lastly, if you are just beginning or generally inexperienced in swimming, boating, sailing, or windsurfing, Meltemi winds can be dangerous for you because they can (and often will) push you out to sea and make it very difficult to fight the currents back to shore.

Are Meltemi Winds a Deal Breaker?

In anything, Meltemi winds will make your summer experience more comfortable during the scorching heat and give you more chances to stay outdoors and do your explorations and other activities (just make sure you don’t forget your sunblock!).

Meltemi winds are a natural, habitual, and welcomed force of nature that locals look forward to and live with without issue. What you need to do, in order to experience them in the same manner, is simply respect them and factor them in your schedule.

How to Handle Meltemi Winds

First of all, bring a jacket with you, even though it’s going to be summer! A light windbreaker is ideal for the cooler evenings or afternoons on the occasion that, like the office air conditioner, the Meltemi wind cools things down a little more than necessary.

Another thing you must factor in when you are designing your scheduling and vacations are delays and changes in departure times for ferries. Always plan for a day’s worth of distance between arrivals and departures if you are planning to connect a ferry trip with a flight, so that you don’t find yourself missing your flight due to bad weather in the islands.

When it comes to swimming and enjoying the beaches, you have options: going to the beach pretty early is the best way to get in your enjoyment of a sandy seaside before the Meltemi picks up. If, however, you’re not an early bird during your vacation time, ask the locals for the beaches that are sheltered from the Meltemi winds. No matter how exposed an island is to them, the beaches at the south and southwest are more likely to be protected. Special formations like a high hill or coves may also do the job, and the locals are the ones who will point you in the right direction.

Another way to enjoy your swimming is to pick a rocky or pebbly beach during the stronger Meltemi days, where sand is not an issue. That way you can also be cooled as you sunbathe- just remember the sun remains relentless, wind or no wind!

If you see a red flag at a beach, then that is an indication that swimming at its waters is dangerous due to strong currents during the Meltemi. Heed the warning and choose another beach.

If you are into windsurfing or sailing, do your due diligence and study up on Meltemi winds before attempting to enjoy them. The best way to go about it is to solicit the experience of local fanatics of the sports (and there are many!) who will clue you in on what to look out for, where to start, and when to opt out of the activity.

Going out to explore the island is the best thing you can do during Meltemi winds that don’t make swimming or lounging about at the beach ideal. You will cover distance with comfort and stay relatively cool despite the heat!

Make sure you wear a light colored, preferably breathable cotton or linen, long sleeved shirt and a hat that will be secured on your head without fail. This will protect you from the sun and help keep you cooled despite walking or hiking, thanks to the wind.

If you are petite or average in height and weight, and the Meltemi is very strong, do not take that lightly. Winds above 7 Beaufort will push you or even threaten to sweep you away so simply make sure you aren’t near dangerous edges like outcroppings or craggy drop-offs.

Like everything in nature, from the lovely sunshine to the charming sea, Meltemi winds are nothing to worry about. They will not stop you from doing anything you have planned or hope to experience. The only thing that is required is knowledge and common sense. Use what the winds have to offer to your advantage and maximize your experiences during your dream vacation in the Greek islands!