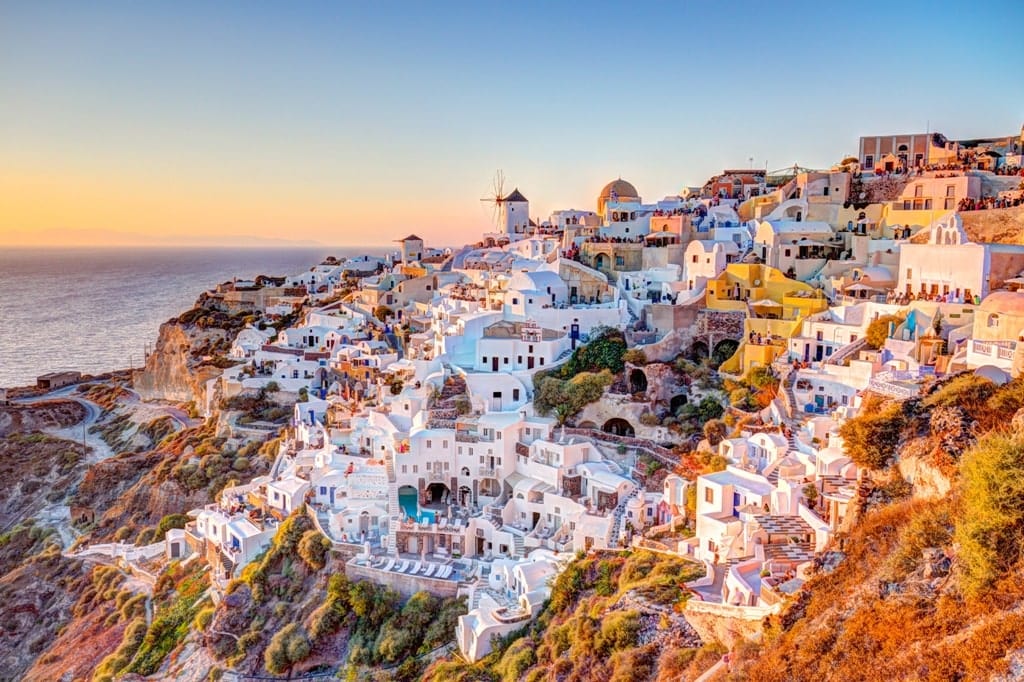 With more than 6,000 islands across the Aegean and Mediterranean Seas, you could explore the Greek islands for years and barely scratch the surface. While Santorini and Mykonos rightly draw lots of tourists, there are few Greek Islands that won’t take your breath away.

With huge ones that feel like countries in themselves such as Crete, to tiny car-free paradises like Hydra, each of the country’s 228 inhabited islands has its own distinct individual character and personality.

No matter where you stay, you’ll find cute villages and towns where you can sample traditional food, gorgeous beaches perfect for chilling and swimming, and heaps of ancient history.

In this post, we’ll take a look at fifteen of the most beautiful Greek Islands.

15 Most Beautiful Islands in Greece

Possibly Greece’s most iconic destination and one of the most immediately recognizable vistas in Europe, Santorini’s whitewashed houses and blue-domed churches line the slopes of a volcanic caldera. The eruption that created the island was one of the biggest ever witnessed by mankind, and the volcano is still active!

One of the Cyclades Islands, there are four towns on Santorini from which you can experience its timeless beauty. Fira (or Thira), the largest, is where the best selection of hotels and restaurants are. Oia (pronounced Ia) is arguably the most desirable though. It’s certainly the best spot from where to watch the sunset!

There are plenty of beaches to explore in Santorini, all of which can be reached by hiking trails that connect the island. There are some ancient archaeological sites too.

Santorini is one of the most popular tourist destinations in Europe. On such a small island, that means it can be hugely busy – especially during high season!

Hydra is in the Saronic Gulf and is just 1.5 hours from Athens making for a perfect day trip from the capital. It’s a popular spot for artists, and in the past Leonard Cohen, Jeff Koons, and David Shrigley have all spent time on the island.

You can see why – the car-free protected island lacks distractions and is the perfect place to let creativity run wild. The sights here are pretty inspiring too, whether it’s of the jaw-dropping harbour or something as simple as a cat basking in the sun in a back alley.

Thanks to Hydra’s popularity among jet setters and Greek high society, it can get quite expensive here. However, it costs nothing to swim in the crystal-clear waters off Hydra’s coast.

Milos is one of the quieter Cyclades Islands, part of what makes its charm so irresistible. It may be small, but it packs a punch, and has some especially jaw-dropping natural attractions.

One of these is Sarakiniko Beach. Of the 70 beaches on Milos, this is the most photographed spot. It’s a bare white landscape shaped by erosion over thousands of years that drops into the bright blue waters.

It’s known as the island of colors – the blue and white above combine with verdant hills and brightly painted houses in seaside villages to create the most picturesque view.

Fun fact – the Venus de Milo, which now stands in the Louvre Museum in Paris, was discovered in Milos. Hence where it got its name!

The largest island in Greece, Crete can put a smile on the face of any type of traveler. Said to be the birthplace of Zeus, it’s impossible to mention Crete without talking about its history. You’ll find the Minoan palace of Knossos here dating back 9,000 years and considered the oldest city in Europe.

But it’s not all about history. There are some stunning natural sites too. Go hiking and exploring in one of the island’s 50+ canyons – the likelihood of beng accompanied by some wild goats is fairly high!

There’s no shortage of beaches either, with Balos lagoon in Chania being one of the best places to swim in all of Europe. Whatever you do, be sure to set aside some time to pop into a traditional taverna where cheese, wine, and honey will be aplenty!

Syros is said to be like the rest of the Cyclades but without the crowds. Certainly, the administrative capital of the island group doesn’t get the tourist numbers that its neighbours Santorini and Mykonos do.

However, that’s no bad thing. From the moment you arrive in Ermoupoli, you’ll be enchanted. The town, which dates back to the Greek War of independence in the 1820s is named after god Hermes, has a number of iconic sites including the blue-domed Agios Nikolaos Church.

Other sites on the island include Ano Syros, a fortified citadel built by the Venetians in medieval times, and a lot of beaches. Unlike other Cycladic islands, Syros is open for tourism year-round, so there’s never a bad time to visit!

No list of beautiful Greek islands is complete without Corfu. The second largest of the Ionian islands, its culture has been influenced by the Venetians, French, and British. While it’s a popular package holiday destination, there’s so much more to the island than all-inclusive hotels and nights out in Kavos.

Head out to old Perithia to find some peace and quiet. This is the oldest village in Corfu, and it stands at the foot of Mount Pantokrator, where you can explore Venetian ruins and vineyards. Other historic sites include the Vlacherna Monastery, Angelokastro Castle, and the Mandraki Marina.

And don’t forget the beaches, ten of which hold Blue Flag status. The west coast has endless sandy options, while the east coast is much more pebbly.

The charming island of Symi is a speck on the map north of Rhodes, much closer to the Turkish mainland than Greek. It proves that size doesn’t matter, however, and is often hailed as one of the most beautiful islands in Greece.

Ano Symi Town’s harbour is the first thing you’ll see when arriving by boat, and you’re sure to be bowled over by the vibrant colour palette. The town is just the beginning of an adventure here – you can go hiking in the island’s mountains with views out over to Turkey!

Alternatively, check out one of the island’s many hidden beaches – you might even bag a stretch of sand to yourself!

The largest of the Dodecanese and historically one of the most important islands in Greece, Rhodes is a travelers’ paradise. The adventure starts in Rhodes Town on the northeast tip of the island, where the Colossus of Rhodes once stood guarding the harbor. The maze of medieval streets in the Old Town can take you back to the days of the Byzantine empire by day, while you embrace its vibrant nightlife after sunset.

Outside of Rhodes Town, there’s picturesque Lindos, which has an ancient acropolis looking down over a romantic heart-shaped bay, and a smattering of mountain villages to explore in its centre. Here, you can sample locally grown honey, wine, and get to know the local people and their ways of life.

Known as the Ibiza of Greece, Mykonos has a reputation as a party and nightlife hub. However, that’s not the only reason to come to this dreamy Cycladic paradise. Although, if you are, you’ll be pleased to know that DJ sets, beach bars, and super clubs aren’t hard to come by!

The island is a haven for LGBT+ travelers too, and it has welcomed queer travelers for decades. The majority of accommodations are gay-friendly, and although Greece is a strongly Orthodox country, locals are friendly and welcoming too.

Mykonos was made famous by jet setters in the mid-20th century, and what drew them here is still obvious. The Chora windmills, Ano Mera’s whitewashed monasteries, and Elias Beach are some of the top timeless spots on this gorgeous island!

The beautiful island of Kefalonia is the setting for Louis de Bernières’ timeless novel, “Captain Corelli’s Mandolin”. If you want to get a feel for the island without actually visiting, it’s a great way to do so.

However, you’ll get a better idea of what it’s like by actually heading to the largest of the Ionian islands! It’s a natural paradise, with beaches, forests, and mountains in every corner of the island.

Adventurous travelers should attempt to reach the summit of Mount Athos, where deer and wild horses can be spotted on its slopes. Sunseekers will love the white sands of Myrtos Beach and the pine-fringed Horgota Beach.

When you’re done with natural sights, head to cute fishing villages such as Fiskardo and Argostoli.

Skopelos is the largest of the Sporades Islands, yet you’ll have to fly into Skiathos and take a ferry to get here. The remoteness is a large part of its appeal – there’s just one main road across the island that leads to the main town.

It’s your classic Greek island town. Narrow lanes run between the whitewashed houses with terracotta roofs, dotted with characterful tavernas serving homecooked moussaka. You can even see the ruins of a 13th-century Venetian castle.

While the town’s full of character, Skopelos’ main attraction is its beaches. Kastani Beach is the best-known, and you may recognise it if you’ve seen Mamma Mia!

Naxos is the largest of the Cyclades, and it offers a different vibe from the others in this chain. Some even say it’s the Hawaii of Greece thanks to almost 100km of white sandy beaches and turquoise waters.

The island’s interior is pretty spectacular too. With numerous mountain villages, you can try kitron citrus liqueur and creamy arseniko cheese at the tavernas here. If you can, check out Mount Zeus too. At 1,004 meters above sea level, it’s the highest mountain in the Cyclades and a rewarding feeling if you reach the summit!

There is no international airport on Naxos, so you’ll have to fly to Mykonos or Santorini before taking a ferry to get here or you can fly from Athens.

Chios is a hidden gem just off the Turkish coast, bobbing in the emerald waters of the northern Aegean Sea.

The island is famous for its production of mastic – a gum resin that was used for medicinal, culinary, and cosmetic reasons in days gone by. A number of products – including jams, sweets, brandies, and ouzo – are made with mastic!

Amorgos’ main attraction is the Hozoviotissa Monastery, which clings perilously to a cliff edge above the bright blue waters. It’s in the Cyclades, but it’s off the usual beaten track that includes Mykonos and Santorini. In fact, it’s one of the most remote Greek islands!

Fresh seafood arrives here every day, and you won’t struggle to find a taverna on the harbor at Katapola where it has been lovingly prepared by an expert.

There’s even a shipwreck beach here, much like Navagio Beach in Zakynthos. However, the big difference is that this one doesn’t get the crowds – so you can enjoy some peace and quiet.

Amorgos is the sort of place you should travel if you don’t want to be found for a while!

Paxos, also known as Paxi, is one of the least commercials of the Ionian Islands. Its pebble beaches and clear waters have been attracting artists for decades though. The island is less than 20 square miles, so it’s easy to explore in a day or two on a scooter.

You can get to Paxos from Corfu, and you’ll be deposited at the port and capital Gaios. The largest town boasts Venetian architecture as well as narrow mazy lanes, restaurants, and bars.

Check out the village of Loggos if you’re looking for a postcard perfect fishing village and a swimming spot!