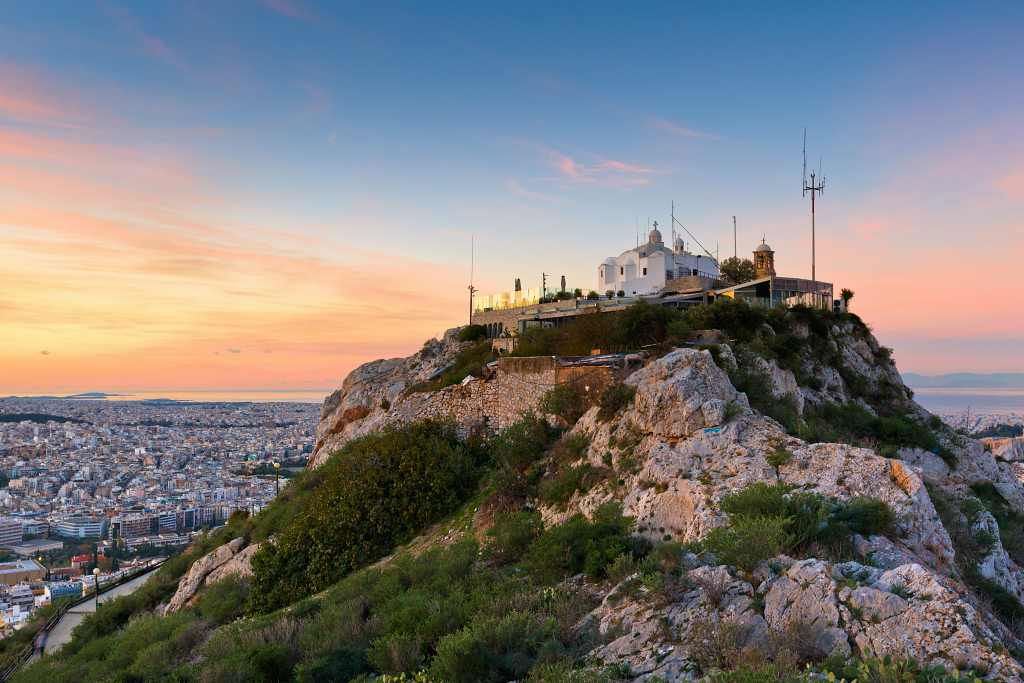 One of the nicest things about Athens is the fact that its dense urban texture is broken up by great green spaces. One of the most dramatic of these is Mount Lycabettus. At nearly 300 meters, it’s nearly twice as high as the Acropolis (at about 150 meters) – offering a unique view of Athens’ most treasured monument. This is the highest point in central Athens, an oasis of natural serenity, and a prime tourist destination.

Where is Mt. Lycabettus?

In the middle of the city, Mount Lycabettus rises up from the chic district of Kolonaki to crown Athens. In fact, some of the nicest real estate in Athens are some blocks of flats in the foothills of Mount Lycabettus, commanding fine views of the city.

Right above the houses and city streets there is a fragrant pine forest, and above this, lots of gorgeous plants. You’ll see eucalyptus, cypress, prickly pear and many cacti, along with dramatic century plants. Natural looking as the flora of Mt. Lycabettus is, these were actually 19h century additions – part of an effort to prevent erosion.the result is a green oasis of serenity, filled with flora harmonious with the landscape of Athens.

If the name is to be considered, this was once the home of wolves – one of the explanations for the name (“Lykos” means “wolf” in Greek). You’ll find no wolves here now. But look carefully as you ascend and you may see a tortoise – this is a haven for them. Birds – a great variety – also love it up here. It’s amazing to rise above the noise of the city and be in such a natural haven.

Getting up to Mt. Lycabettus

There are three ways to get up Mt. Lycabettus – a teleferique, a refreshing hike, and a combination of taxi plus a short but steep climb with many stairs.

The Funicular of Lycabettus, opened in 1965, is certainly the easiest and fastest way to the top. It brings you almost – but not quite – to the summit. To get to the church of St. George you’ll still need to climb two flights of stairs.

The funicular is on Ploutarchou street at Aristippou. The Metro stop “Evangelismos” will bring you closest – walk up Marasli Street until you come to Aristippou, then make a left. The cable car operates every day, from 9:00 am to 1:30 am (stopping earlier in winter though.) There are trips every 30 minutes, and sometimes more frequently at peak periods. The 210 meter ride takes just 3 minutes. The climb is steep, and so is the price – 7,50 round trip and 5,00 one way. There is no view – the funicular is enclosed. The ticket gives you a discount at the Lycabettus restaurant.

A road ascends almost, but not all the way, to the summit. From here, you will meet with a short but rigorous climb that combines stairs and inclines, with stairs at the end. It is perhaps the equivalent in height of 6 to 8 flights of stairs.

The hike up Lycabettus Hill offers the most complete experience, enjoying Athens at its most wild and serene. Foot paths ascend from Ilia Rogakou street, which begins at the west of Kleomenous street, right by the St. George Lycabettus Hotel. Follow the street up with the mountain on your right, and take the path on your right, which appears after about 200 meters.

The hike up Lycabettus hill is a little less than 1.5 kilometers, and the ascent is about 65 meters. It is mainly a slow and steady climb along winding paths through the woods, with some sets of stairs. You then meet the final ascent that begins from the car road, which is open to the city.. The views from here are already wonderful.

The walk up can take from 30 to 60 minutes, and can be strenuous but invigorating. The air is sweet with the scent of pine.

What to See on Mt. Lycabettus

Of course, most everyone is here for the view! But there are several ways to enjoy it. If you;re hungry from the climb, you can stop at the small snack bar at the top of the steps for a Moussaka and a salad and a glass of wine for a nice price.

They also have ice cream. But if you want to linger in one of the most romantic locations in Athens – especially by sunset – you might want to splurge for the full-service restaurant “Orizontes” (“Horizons”) on its large patio on the “impressive” side of the mountain – the side that overlooks most of the sights.

Yet one more level up is the crest of Mt. Lycabettus, the fabled 360 degree views, and the Church of St. George. This small chapel was built in 1870. Right in front of it is the primary viewing platform, which gets very crowded and very festive, especially as the light turns golden – the sight of the sunset from Mt. Lycabettus is a special Athens experience.

What You Can See from the Summit of Mt. Lycabettus

From the top of Mt. Lycabettus, you have a great sense of the geography of Athens as it spreads to the shimmering sea in front of you and rises up the hillsides behind. In the distance, you can easily make out the port of Piraeus and the many ships coming and going from this busy port. The island Salamina in the Saronic Gulf rises right behind it in the distance.

You easily can spot many famous monuments from the viewing platform. These include the Kalimaramara (the Panathenaic Stadium, site of the first modern Olympic games), the National Gardens, the Temple of Olympian Zeus, and – of course – the Acropolis. Seeing the Parthenon light up after dusk is wondrous, and worth waiting for.

The Church of Agios Isidoros

On the northwestern slope of Mount Lycabettus is another church that can be hard to find but is worth seeking out – consult signs and ask for help and a path will take you there. Agios Isidoros – which also is dedicated to Agia Merope and Agios Gerasimos – is a much earlier church than the church of St. George.

It was built in the 15th or 16th century and the heart of the church is actually the natural cave into which it has been built. It’s rumoured that an underground tunnel led from the chapel of Agios Gerasimos to Penteli and another to Galatsi – once used for escaping from the Turks.

However you arrive, this is a wonderful place to visit in Athens – to get oriented, enjoy nature – and perhaps a glass of wine – and take some of the best photos of the city. When you descend, you’ll be in the heart of Kolonaki, a wonderful place to spend the rest of your afternoon or evening.