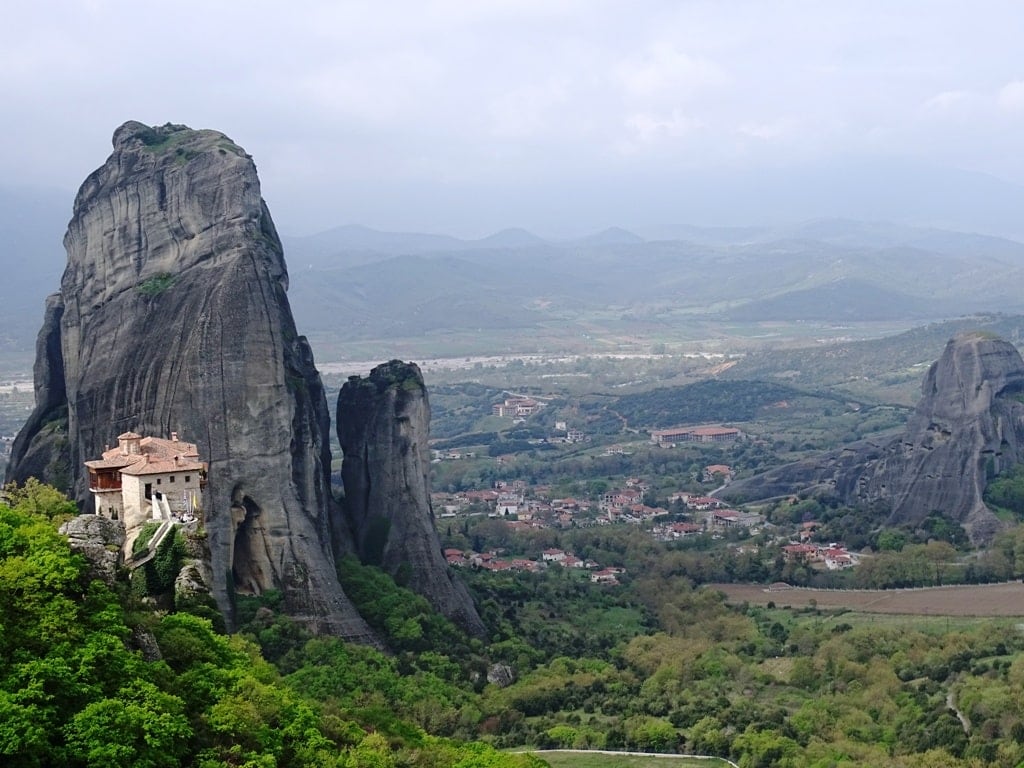 The unique landscapes of Greece, with their huge versatility and unparalleled beauty, are great for getaways and exploration, but they also make for great cinematic settings. From the breathtaking caldera views of volcanic Santorini to the mythical “soaring” rocks of Meteora, Greece has been used as the background to give life to various stories in movies.

Here’s a list of the best movies about Greece:

15 Films Set in Greece You Must See

Starting the list with the most iconic of the movies set in Greece, Mamma Mia, filmed on the majestic island of Skopelos.  The story is of Donna (Meryl Streep), a successful hotel owner in Skopelos who plans for the wedding of her beautiful daughter Sophie (Amanda Seyfried) to handsome Sky.

The tables turn when Amanda invites three men from Donna’s past in hope of meeting the father she never knew.

With lively music and some ABBA vibes, the movie does not lack introspective elements of deep conversations and a rollercoaster of emotions.

To tie all this together, we get glimpses of breathtaking views of endless Aegean blue, cliffs, lush vegetation, and white-washed churches. These are among the few beauties of the Sporades portrayed in the film.

My Life in Ruins, also known as Driving Aphrodite is a 2009 rom-com, filmed primarily in Greece. The story follows Georgia (played by Nia Vardalos), an ex-academic who is now a travel guide, although she dislikes her job. She has lost her “kefi”, her purpose in life, and is soon to find it after she follows a group of fun tourists to Athens and beyond, visiting sights such as the Acropolis, Delphi, etc.

The movie takes us through a tour of lovely landscapes, archaeological sites, endless blue, and amazing panoramic views.

Before Midnight is also a romantic film set in Greece. In it, we follow the story of our long-known couple. While their idyllic family vacation comes to an end, the famous lovers Jesse (Ethan Hawke) and Celine (Julie Delpy) from the film series Before Sunrise (1995) and Before Sunset (2004) flirt, challenge each other, and reminisce about the past of an 18-year-relationship. They think of all their life choices and how their past, present, and future selves could be, had they taken different paths.

Set in the Mani Peninsula of the southern Peloponnese region, the simplicity and spartan minimalism of the landscape are the perfect background for introspection and entangled human relationships. The film travels us through olive groves, summer nights, crystal waters & rocky landscapes contrasting with archaeological ruins and the glory of the past.

4. Sisterhood of the Traveling Pants

Teen comedy is the genre of the next movie about Greece, where we follow the story of a group of girl best friends from Maryland. The sisterhood consists of Bridget (Blake Lively), Carmen (America Ferrera), Lena (Alexis Bledel), and Tibby (Amber Tamblyn) and tells the story of the perfect pair of jeans, set as the traveling pants for summer holidays, following each character on vacation.

Lena Kaligaris, visiting her grandparents who live in the Cyclades, is the one that takes the pants and us on a journey to white-washed dwellings, caldera views, and the pristine nature of volcanic Santorini.

Along with Greek landscapes, viewers can also enjoy a visual trip to Mexico with Bridget and Southern California with the rest of the girls.

The 1988 film The Big Blue is another film set in Greece, directed by Luc Besson, whose style combines imaginative visuals with abrupt action to create breathtaking films. The story is about Jacques Mayol and Enzo Maiorca, both lovers of freediving. Scenes of the film cover their childhood during 1965 in Greece, up to the 1980s.

It is an exploration of friendship and rivalry, unraveling in front of the stunning and untouched landscape of Amorgos, with endless blue Aegean waters and the steep rocky beauty. With many underwater shootings and strong emotional and psychological elements, the film is now considered part of cult cinema.

6. For Your Eyes Only

For Your Eyes Only is another movie about Greece, released in 1981, and the twelfth film in the James Bond series. It is a movie full of action, where British agent James Bond is called to retrieve a lost encryption device before the Russians can get their hands on it.

Intertwined with action is a romantic interest, and a wealthy hero of the Greek resistance movement, who is also involved in locating the equipment. The movie is filmed in various stunning locations including Italy, England, The Bahamas, and Greece.

The majestic and otherworldly Meteora in mainland Greece serves as a wonderful background to the action with monasteries built upon steep rocks, looking as if they’re “soaring.” We also get glimpses of the Ionian islands and long walks on sandy shores.

Captain Corelli’s Mandolin, released in 2001, is a film set in Greece with Nicolas Cage and Penélope Cruz as the protagonists. It is an adaptation of the Louis de Bernières’ novel of 1994. The setting is wonderful Kefalonia during the time of the island’s occupation.

The film tells the story of the atrocities committed by German forces in September 1943 against Italian soldiers and as Greek civilians, whose lives were lost both during the war and in a massive post-war earthquake.

It features secluded coves and crystal-clear waters of rugged coastlines in the stunning Ionian Island of Kefalonia!

8. Tomb Raider: The Cradle of Life

Old-time favorite heroine Lara Croft played by Angelina Jolie goes on an adventure in Santorini in The Cradle of Life (2003).  After a strong earthquake unearths the ‘Luna Temple’ built by Alexander the Great, Lara Croft finds a magical orb and other mysterious findings, whose meaning is searched for during the movie.

This film makes use of Santorini’s unparalleled volcanic beauty, not only with panoramic shots and the Cycladic scenery but also with some underwater scenes shot in and around Santorini’s deep caldera. It is mostly set in the town of Oia, a picturesque location with its world-famous sunset above the caldera and the surrounding ‘moonscapes’.

A classic film about Greece and Greek culture is Zorba the Greek (1964) labeled as drama/adventure. In it, English author Basil played by Alan Bates travels to Crete to an abandoned mine owned by his father. There, he meets Alexis Zorba (played by Anthony Quinn), a peasant. He is invited along with what Basil calls a ‘mining experience’ and the two live moments of adventure, Greek dancing, and love.

When things border on the tragic, Zorba the Greek is there to teach Basil how to live through life enjoying each moment. The exuberant Zorba and the organic Cretan landscape are perfect contrasts to Basil’s uptight Englishness, and the relationships that unfold are unique.

10. The Two Faces of January

The Two Faces of January (2014) is a thriller mostly filmed in Greece, namely Athens and Crete, but Istanbul as well. It tells the story of an affluent couple, a con artist (Viggo Mortensen), and his wife (Kirsten Dunst) on vacation when suddenly things get a bad turn.

The husband kills a detective in Greece and is left with no option but to try to escape Greece with the help of a stranger (Rydal) who does not look trustworthy, to say the least.

A series of action scenes, plot twists, and manhunts unfold in front of the viewers’ eyes along with stunning shots of the Acropolis, Chania, Knossos, and the Grand Bazaar, mesmerizing the audience in flawless cinematography.

Another movie filmed in Greece makes use of Mykonos as its captivating background, along with other European places such as Paris, Prague, and Italy. Matt Damon is Jason Bourne, who was ‘fished’ out of the water of the ocean by an Italian fishing boat near death.

After that, he suffers from complete amnesia and has no grip over his identity or past, just indications of excellent fighting skills and self-defense. With the help of Marie played by Franka Potente, Jason tries to discover who he was, without knowing he is hunted by lethal assassins.

The landmark of Mykonos, the picturesque windmills, is featured towards the end of the movie, and so is Alefkandra (known as Little Venice). The short shots are enough to make anyone add Mykonos to their bucket list.

In this classic 1989 romance, Shirley Valentine (Pauline Collins), who is a housewife from Liverpool in England, needs a change in her life as she is trapped in domesticity.

Her friend Jane (Alison Steadman) invites her on a trip to a Mykonos in Greece, but she ditches Shirley after she finds her romance with a passenger on the flight. Shirley is left to her own devices, wandering the island, soaking up in the sun, and meeting Costas Dimitriades, a taverna owner (Tom Conti) with whom she finds romance.

Filmed in Mykonos, with Agios Ioannis beach as its main setting, Shirley Valentine gives off the atmosphere of the Greek culture of the Cyclades, as well as the epitome of most summer vacations on Greek islands with idyllic landscapes, boat tours, skinny dipping, and breathtaking sunsets.

High Season (1987) is another movie set in Greece, where Katharine Shaw (Jacqueline Bisset), an English expatriate and talented photographer lives in the idyllic Greek village of Lindos in Rhodes.

During summer, tourists arrive on the island, and the plot thickens as she discovers that her best friend, a British art expert, is a Russian spy, and her ex-husband is a playboy. She is “chased” by these presences and the presence of Rick (Kenneth Branagh), the lovesick tourist, as well as her teenage daughter.

The wonderful, pristine town of Lindos in Rhodes offers some spectacular shots of crystal-clear waters, ancient ruins, and Greek culture.

In this 1982 romance/drama, Michael Pappas (Peter Gallagher) and his girlfriend, Cathy (Daryl Hannah), are on vacation on the volcanic island of Santorini. There, they are enjoying the white sand beaches and the hospitality, until Michael meets Lina (Valerie Quennessen), a French woman archaeologist from Paris who lives in Greece.

Cathy is unhappy about Michael’s infatuation with Lina and their close relationship and confronts the woman. Little did she know that she would soon fall for her charms as well.

This delightful movie set in Greece was released in 2005 and tells the story of Eric (Matthew Modine) who is an archaeologist willing to find the cup of St John the Divine, buried deep beneath the ground of the Greek island of Patmos. Soon, he gets to know how life on the island is slower than the pace he is used to, where he learns to enjoy life, eat, dance and flirt.

The film stays true to its promise of uplifting spirits, with “kefi” and an upbeat soundtrack against the background of the incomparable beauty of Greece, namely, historic Patmos, where there are rumors that a cave exists where John of Patmos has written the Book of Revelations. The movie has some wonderful shots of the Dodecanese culture and architecture of Chora.

Those are most of the films set in Greece, which are surely worth watching if not for the plot, then definitely for the visual exploration of the various locations in Greece.

Buckle up and enjoy breathtaking panoramas combined with action!