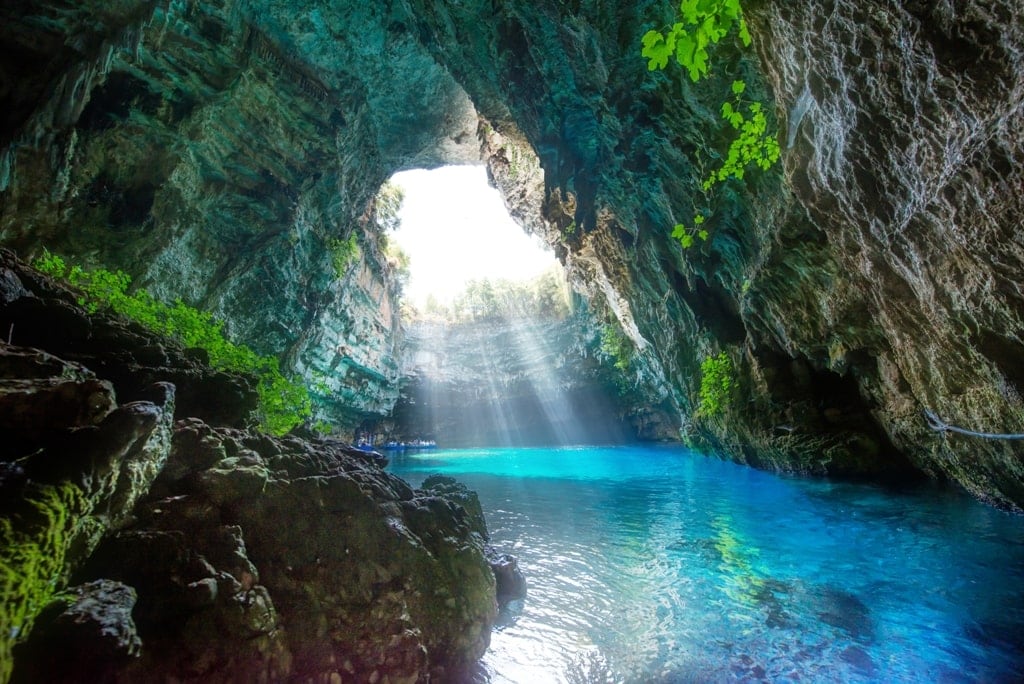 There are more than 8,500 caves in Greece (3,000 in Crete alone) and they are wonderful places to learn more about Greek history and mythology. There’s a cave that is the birthplace of Zeus, another is the home to a beautiful nymph. One is even said to house a dragon that breathes poisonous gas!

Some caves have been used as places of worship for thousands of years, while others were used by villagers to hide from the Nazis. Every cave in Greece has a story, and each is more fascinating than the one before.

In this post, we’ll take a look at caves in Greece, both on the land and at sea.

10 Caves to visit in Greece

The cave of St George is located at the foot of St. George’s Hill in Kilkis in northern Greece. Said to be one of the most remarkable caves in Greece, its conditions make it ideal for treating several medical conditions, including respiratory diseases, allergies, and skin diseases. The therapeutic cave has also housed more than 300 samples of well-preserved animal bones that are 15,000 years old!

If you want to learn more about St George’s cave and the findings from there, you can check out the Paleontological Museum in Kilkis.

The flooded Diros Caves are found on the Mani Peninsula in Greece’s southern Peloponnese, 11km south of Areopoli. You’ll find their entrance on the beach and fishermen will take you through the underground caverns in their boats. There are more than 2,500 waterways and the caverns extend 15km into the rocks!

By the torchlight, you’ll see hundreds of jagged stalactites reflected in the clear water lit by fishermen’s torches.

The caves have not been completely explored, but it is known that they date back to Neolithic times.

Meaning ‘wind hole’ in Greek, Anemotrypa is a network of caves in Pramanta Village in the Epirus Mountains. It was only discovered around 50 years ago when two locals went to investigate air flowing from a hole on the outskirts of the village.

They discovered an enormous system of caves with underground rivers, lakes, and waterfalls.

The caves are split across three sections, with two open to the public (the upper level has partially collapsed and is not safe). Guided tours are available and a gift shop at the entrance sells local products.

Tucked away at a height of 1,025 meters, Dikteon Cave (also known as Dikteon Andron or Dictaean Cave) is on the slopes of Mount Dicte and looks out over the Lasithi Plateau. It is said to be the most important and famous of all the 8,000+ caves in Greece.

Legend has it that Rhea gave birth to Zeus in this cave to hide him from his cannibal father, Cronos.

Visitors today can find numerous rock formations around a lake. There are two trails which you can take to the cave from nearby Psychro, one shaded and the other sunny.

Cave of the Dragon

Known as the jewel of Kastoria, legend says that the Cave of the Dragon was once a gold mine guarded by a dragon who breathed poison to deter anyone from entering.

The cave opened to anyone willing to brave the dragon’s fumes in 2009, and as yet, no-one has been poisoned. There are seven underground lakes and ten caverns of various sizes connected by corridors and tunnels.

The cave is of paleontological interest, and there are bear bones in the cave which are estimated to be 10,000 years old.

The 150-million-year-old Drogarati Cave is one of the biggest in Sami, Kefalonia. It reaches a depth of 60 meters and was discovered after an earthquake when a collapse revealed the entrance.

There are two parts of the cave that are open to tourists. One is the Chamber of Exaltation – the acoustics here are so good that it’s known as “Concert Cave” and several musical performances have taken place here. The other part is the Royal Balcony, which is a natural platform of stalactites that reflect the light. A small lake separates the two chambers.

Check out: The caves of Kefalonia.

Cave of the Lakes

Near Achaïa on the Peloponnese, you’ll find the stunning Cave of the Lakes. Thirteen stone basins hold small lakes, which you can admire from the 500-meter boardwalk that takes you through the cave.

The explored length of the caves is 1,980 meters and you’ll find the cave’s most impressive rock formations in the final chamber – they look like curtains!

Cave of the Lakes is a must-stop for nature lovers too. You can get close to the five species of bat which call the cave home in its entrance chamber.

Crete has more than one-third of the caves in Greece, there are around 3,000 on the island alone. Melidoni is one of the most impressive and historically important. Known as Gerontospilos in Greek, it’s found 30km east of the town of Rethymno.

The cave has been inhabited for more than 5,500 years, which experts know because of the pottery and animal skins discovered. During the more recent Minoan period, the cave was used as a place of worship.

Nowadays, you can enter the cave and admire the three levels. The largest is called the Room of Heroes, where 400 people were killed after the Turks blocked the entrance and lit fires.

The Cave of Oliaros, also known as Antiparos Cave, is the most popular tourist attraction on the small Cycladic island of Antiparos. It sits more than 100 metres above sea level and was first explored in the 15th century.

Antiparos cave has a rich history, having been used both as a refuge and a place of worship.

The entrance to the cave is home to what is believed to be the oldest stalagmite in Europe. It’s around 45 million years old! A more recent addition to the cave’s entrance is the Agios Ioannis Spiliotis, a white chapel that was built in the 18th century.

The second-largest cave in Greece and undoubtedly one of its most impressive, Perama Cave is 4 kilometers from the city of Ioannina. The cave was a secret until the 1940s, locals found it when trying to find somewhere to hide from the Nazis.

The cave complex covers almost 15,000 square kilometers and is home to 19 types of stalagmites and stalactites. Guided tours take less than an hour and you’ll see animal fossils and underground lakes.

6 Blue Caves to visit in Greece

You’ve already seen one cave near Sami in Kefalonia (Drogarati), but the Cave of Melissani is one mile northwest of Sami. It’s not only one of the most popular tourist attractions in Kefalonia but the whole of Greece.

Known as the Cave of Nymphs in Greek mythology, the cave entrance is vertical and surrounded by trees and vegetation, while set inside 20 meters below the surface, is a lake. The lake is 10 to 40 metres deep and when the sun hits the turquoise waters, the whole cave is filled with a magical and mystical blue light. You can only visit the cave by boat.

As the cave is so popular, it’s tricky to say the best time to visit. Early morning has fewer crowds but the sun fills the cave with blue light around noon.

Zante’s Blue Caves are up there with Navagio Beach as the most popular tourist attraction on the island. A series of rock formations created naturally by erosion lies between Agios Nikolaos and Skinari Cape.

When inside the caves, light reflects on the water and paints anything blue that it touches including people. The best time to visit the caves for this ethereal light is early in the morning though the caves take on a reddish hue in the late afternoon/evening.

Boat trips are not the only way to explore the caves, they’re hugely popular with scuba divers too!

A must for history buffs, the Papanikolis cave is so large that a submarine was hidden here during World War II. In fact, it’s the largest sea cave in Greece. It’s also thought to have been used as a hiding spot for Aegean pirates.

Located on the island of Meganisi, off Lefkada, the natural cavern stretches 120m long and 60 wide amid limestone cliffs.

You can swim in its crystal clear waters and there’s even a beach inside where you can chill out and dry off.

Paxos and Antipaxos, close to the southern coast of Corfu, are said to be the jewels of the Ionian Sea, and their caves are the high point of a visit to the islands. Only accessible by boat, Paxos’ Blue Caves are a cluster of caverns near Erimitis Beach.

One of the most impressive caves has a collapsed roof that lets the sunshine through as you sail through or even take a relaxing swim.

Visiting the Blue Caves is a popular day trip from many locations on Corfu.

Another of the most stunning blue caves of Greece, this one is almost completely hidden until you go inside. The entrance is only about a metre high, so it’s a good idea to take a tour with a local guide who will know how to navigate it.

Once you get inside, it opens up to a cavern that measures 75 metres long, 40 metres wide, and 35 metres high.

Visit in the morning and you’ll see turquoise waters which are refracted by sunlight, giving everything an ethereal bluish hue.

Alonissos is one of four of the inhabited Sporades Islands in the Aegean Sea. Its Blue Cave is arguably its most impressive attraction.

The cave is located between Strovili and Lalarias, two remote beaches on the northeastern side of the island. As well as taking a boat trip to appreciate the beauty of the Blue Cave, you can go scuba diving in the cave too. It’s a wonderful experience!