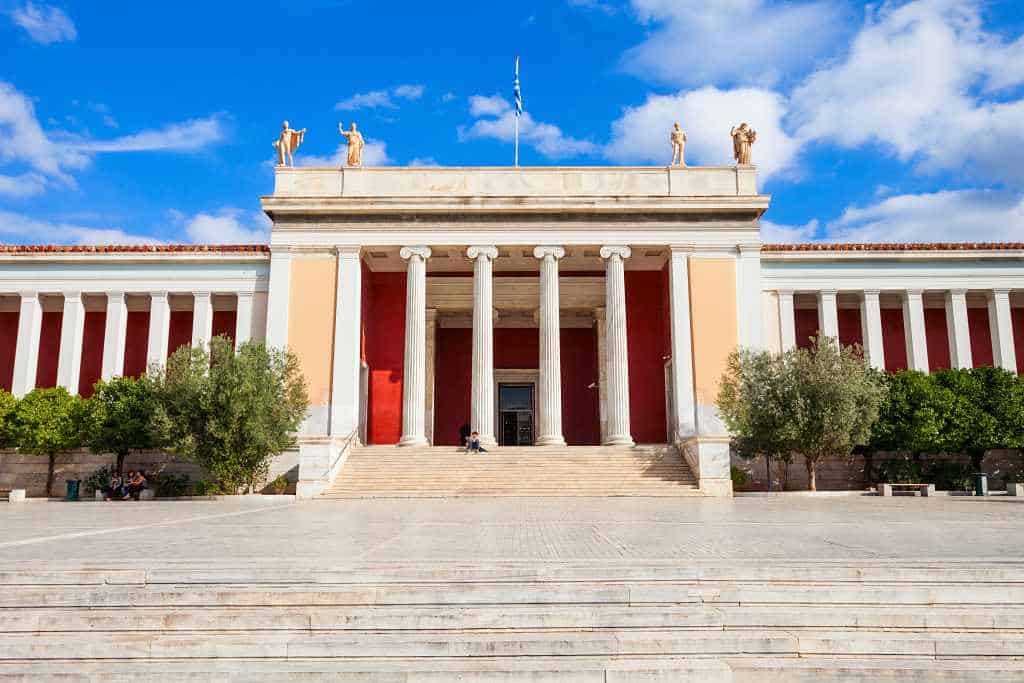 The National Archaeological Museum of Greece is one of the most important museums in the world. This is Greece’s largest Archaeological Museum, and as we are here in the cradle of Western Civilization, a visit here is more like a cultural pilgrimage – an experience to broaden the soul.

In the countless statues, monuments, and objects on display, we see the foundation of the aesthetic principles that have shaped and inspired centuries of art and architecture.

Check out: The best museums to visit in Athens.

This glorious museum was, fittingly, the first museum to be established in the newly founded independent Greek State. After the War of Independence of 1821, freeing Greece from the Ottomans, the new Greek State celebrated its cultural identity.

The Archaeological Museum was an important symbol of that. It first opened on the island of Aegina. Why there? The island served briefly as the first capital of the Greek State, In 1834, when Athens finally became the capital, the museum was transferred here. But it would be many years until it would open to the public.

The present building began construction in 1866 and opened to the public in 1889. The initial collection focused on sculpture and prehistoric antiquities. Then, in the first half of the 20th century, excavations all over Greece yielded many treasures, added to the museum’s collections.

The Building of the Archaeological Museum of Greece

The design, by Ludwig Lange, has a facade modified by Ernst Ziller. Fans of Athens’ excellent Neoclassical architecture will know Ziller from his other famous monuments – the Iliou Melathron (now the Numismatic Museum) and the Stathatos Mansion (now the Museum of Cycladic Art), among many.

How Much Time Do I Need at the Archaeological Museum?

That of course is entirely up to you. One could literally fill a couple of days here – so expensive are the exhibitions. But don’t worry – whatever time you can afford will be very well spent here. The museum has so many grand highlights of western civilization that you can have a very satisfying overview of the museum’s collections over the course of a long morning or afternoon.

The Collections of the Museum

The Archaeological Museum of Athens is beautifully and logically arranged.

The Prehistoric Antiquities collections are a great place to start, giving your visit a valuable foundation. Here, you’ll see objects from the 6th millennium BC (that’s 6000 to 5001 BC), through 1050 BC.

The Sculpture Collection is of course a great highlight – you’ll likely recognize some of the famous pieces here. Ancient Greek sculpture from the 7th century BC through the 4th century AD. All the major periods are covered – the Archaic Period (650 – 480 BC), the Classical Period (480 – 323 BC), the Hellenistic Period (323 – 86 BC), and the Roman Period.(86 BC – 267 AD). The stunning collection numbers 16,000 pieces.

The Metalwork Collection is one of the most fascinating. In this collection, we see not only magnificent works of art, but we gain insight into the ingenious advances in science and engineering. The objects cover the Geometric Period (the 9th and 8th centuries BC) through the Roman Period.

Vases and Minor Arts includes of course the famous black-figure and red-figure pottery of ancient Greece, with the core of the collection covering Greek pottery from the 11th through the 4th centuries BC. Here you’ll also see exquisite examples of glass vases, gold and silver vessels, jewelry, and figurines.

A Few Highlights at the Archaeological Museum

Death Mask of Agamemnon – Possibly one of the most famous objects of the museum, this golden mask of the 16th BC is from the excavations at Mycenae. This is in the Mycenaean Antiquities section.

Kouros Figures – a major feature of the Sculpture collection are the Archaic period Kouros figures which show increasing refinement and definition.

Bronze Statue of Zeus or Poseidon – this arresting and majestic figure of the mid- 6th century BC, depicted with arms outstretched, was recovered from the sea off of Evoia.

Marble Group of Pan, Aphrodite, and Eros – this masterpiece of the Hellenistic Period from the sacred island of Delos shows the goddess fending off the advances of Pan, slipper in hand.

The Cafe at the Archaeological Museum

By all means, do refresh yourself at the cafe. Located in a courtyard surrounded by a loggia, it’s a charming oasis of respite.