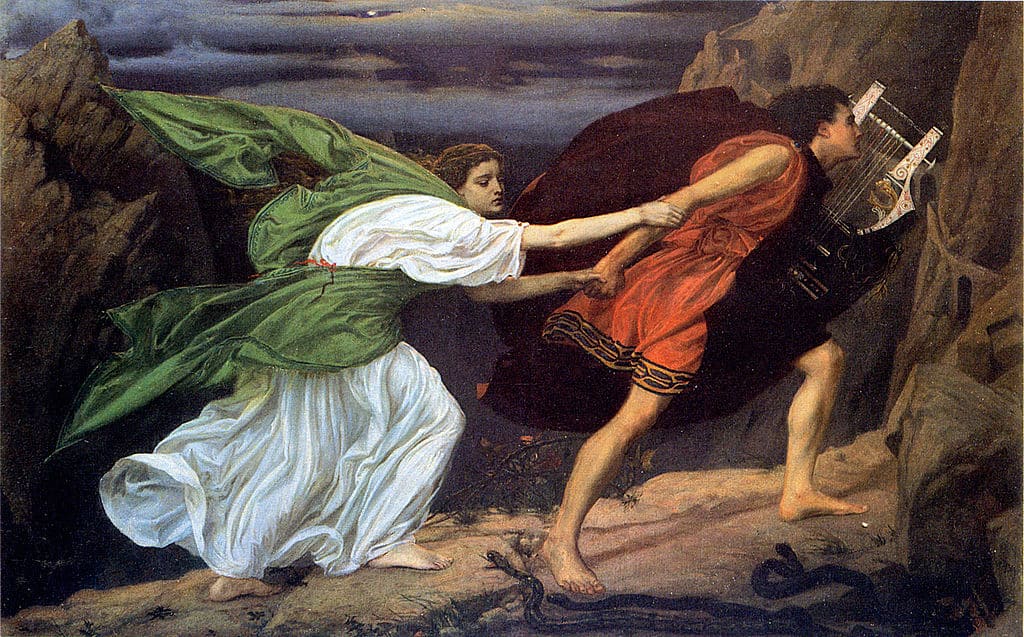 One of the most famous love stories of antiquity is undoubtedly the fateful and tragic story of Orpheus and Eurydice. This story was also adopted by Roman literature, and it is widely considered a classical myth that has inspired artists, writers, and composers from antiquity to this day.

Orpheus was the son of the god Apollo and the muse Calliope and was living in Thrace, in the northeastern part of Greece. It is said that he took his extreme talent for music and his divinely gifted voice from his father, who also taught him how to play the lyre. None could resist his beautiful melodies and his divine voice, which could also enchant enemies and wild beasts.

According to some other ancient texts, Orpheus is furthermore accredited with having taught agriculture, medicine, and writing to mankind. He is also attributed to have been an astrologer, a seer, and founder of many mystic rites. Apart from his musical talents, he also had an adventurous character. It was said that he had taken part in the Argonautic expedition, the voyage that Jason undertook with his fellows in order to get to Colchis and steal the Golden Fleece.

The Myth of Orpheus and Eurydice

One time, when Orpheus was playing his lyre in nature, his eyes fell upon a beautiful wood nymph. Her name was Eurydice and she had been drawn to Orpheus by the beauty of his music and voice. The two of them fell in love instantly, unable to spend a single moment apart. After a while, they got married and Hymenaios, the god of marriage, blessed their union. However, the god also predicted that their perfection was not meant to last.

A short time after this prophecy, Eurydice had been wandering in the forest with other Nymphs. Aristaeus, a shepherd dwelling nearby, had devised a plan to conquer the beautiful nymph since he deeply hated Orpheus. He set an ambush for them in the middle of the forest, and as they approached, he jumped on them in order to kill Orpheus.

As the shepherd made his move, Orpheus grabbed Eurydice by the hand and started running through the forest. Few steps away, Eurydice had stepped on a nest of snakes and had been bitten by a deadly viper, instantly dying. Aristaeus had abandoned his try, cursing his luck. Orpheus sang his deep grief with his lyre and managed to move everything, living or not, in the world; both humans and gods learned about his sorrow and grief.

And so Orpheus decided to descend to Hades in order to bring his wife back to life. Being a demigod, he could enter the realm of the dead, passing by souls and ghosts of people unknown. With his music, he also managed to enchant Cerberus, the three-headed dog that guarded the gates of the Underworld.

He later presented himself in front of the god of the Underworld, Hades, and his wife Persephone. Even the Gods could not neglect the pain in his voice, and so Hades told Orpheus that he could take Eurydice with him but under one condition: she would have to follow him while walking out to the light from the caves of the underworld, but he should not look at her before coming out to the light or else he might lose her forever. If he was patient, Eurydice would become his once more.

Orpheus thought that this was an easy task for a patient man like himself, and so he accepted the terms and began the ascend back into the world of the living. However, just before reaching the exit of the Underworld, and being unable to hear his wife’s footsteps, he feared that the gods had fooled him. In the end, Orpheus lost his faith and turned to see Eurydice behind him, but her shade was thrown back among the dead once more, now trapped with Hades forever.

From that day onwards, the heart-broken musician was walking disoriented, playing a mourning song with his lyre, calling for death so that he can be united with Eurydice forever. It is said that he was killed by beasts tearing him apart, or by the Maenads, in a frenzied mood.  According to another version, Zeus decided to strike him with lightning knowing Orpheus may reveal the secrets of the underworld to humans.

In any case, the Muses decided to preserve his dead and keep it among the living, so that it could sing forever, enchanting every living being with his divine melodies and tones. In the end, Orpheus’s soul descended to Hades where he was finally reunited with his beloved Eurydice.

The Labors of Hercules