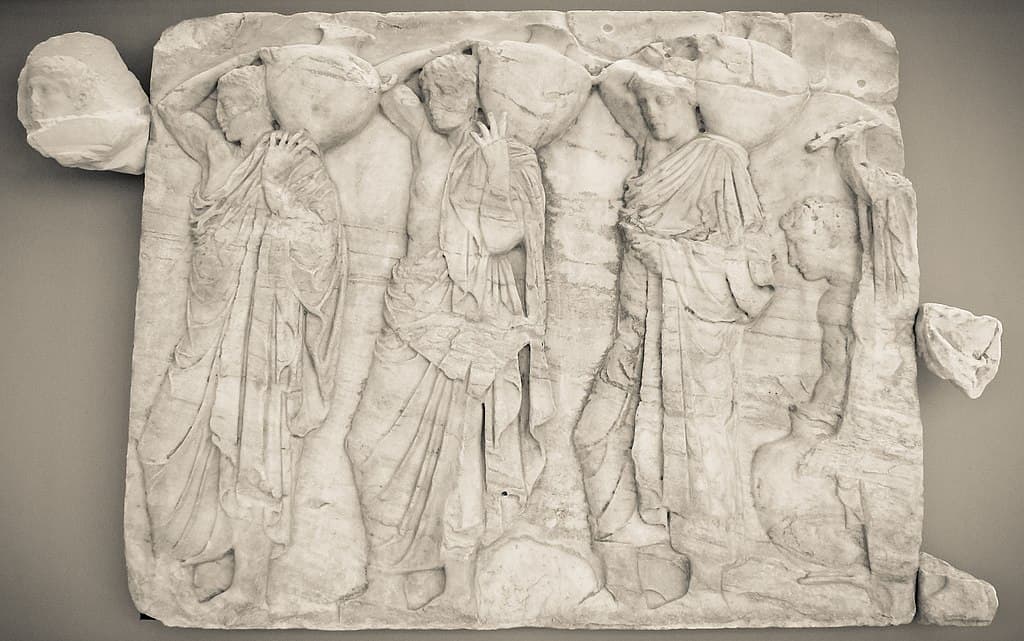 Among the many excellent institutions that Athens has given birth to stand the Panathenaea, it’s the most important festival and one the greatest in the entire Greek world. Except for slaves, every Athenian could partake in this great celebration of life.

Being primarily a religious festival, the Panathenaea were held in honour of Athena Polias and Erechtheus, and it is said to have been founded by the mythical figure of Erechtheus 729 years before the first Olympiad (between 1487 and 1437 BC).

According to myth, it was first called Athenaea, but after the sunoikismos (joint settlement) by the legendary figure of Theseus, the festival was renamed Panathenaea.

The holiday fell on the 28th of Hekatombaion, the month which is roughly equivalent to the final days of July and the first days of August. It is believed that the holiday was an observance of Athena’s birthday.

Peisistratus, the tyrant of Athens, used the religious character of the festival to unite every demos of Attica under his rule, but also to emphasize the superiority of Athenian culture. The celebrations took place every four years and lasted several days, during which many public events took place, most important of them being the contests, the procession and the sacrifices.

A Guide to Panathenaea Games

The Athletic Contests at Panathenae

Every event, except for the torch and boat races, consisted of three different age categories: boys (12-16), ageneios (men without a beard, 16-20) and men (20+). These athletic contests took place in the Agora until in 330 B.C when a stadium was built in the outskirts of Athens for this purpose.

Some contests, such as physical fitness, pyrrhic dancing, torch relay race, and boat races were competitions restricted to members of the Athenian tribes, who had the title of citizen, whereas in the track and field and equestrian events even non-Athenians could participate.

The prize for most of the athletic contests was varying numbers of amphoras (vessels) filled with olive oil. Oil was a very valuable commodity, not only in Athens but also in the whole Mediterranean world, while at the same time it was considered sacred to Athena. It was most often used like butter for cooking, as a fuel for lamps and as a soap.

Furthermore, athletes rubbed themselves with olive oil before competitions and later on scraped it with a metal device. Usually, the winning athletes sold their prize oil for cash.

In the case of the torch relay race, where four runners from each of the ten Athenian tribes tried to outrun each other without causing the torch to go out, the prize was a bull and 100 drachmas. This event was part of the all-night (pannychos) celebration that also involved dancing and music.

As far as musical contests were concerned, there were three main musical competitions in the Panathenaea: singers accompanying themselves on kithara, singers accompanied by an aulos (a wind instrument) and aulos players. Rhapsodic contests also took place. The rhapsode competed in the recitation of epic poetry, mainly reciting Homeric poems, and they performed without any musical accompaniment.

It is widely believed that the Homeric texts used by the rhapsode are the ancestors of Homeric poems that we now have in our possession. These kinds of musical competitions were only held during the Greater Panathenaea, and they were introduced for the first time by Pericles, who built the new Odeum for this very purpose.

Τhe festival reached its climax with the Procession, starting from the Keramikos, and ending on the Acropolis. The procession was led by the victors in the games and the leaders of the sacrifices, with the whole Athenian population following.  The goal was to offer to the statue of Athena the peplus and to perform sacrifices to her.

The peplus was a large square fabric that was prepared every year by the chosen Athenian virgins (ergastinai) under the supervision of the priestess of the goddess. They were also the ones holding the peplus during the procession. On it, scenes from the Gigantomachia were represented, that is the battle between the Olympian gods and the Giants.

The procession passed through the Agora to the Eleusinium at the east end of the Acropolis, and then it reached the Propylaea. Some members performed sacrifices to Athena Hygiaea, with prayers accompanying these offerings.

On the Acropolis, accessible only to genuine Athenians, there was a sacrifice of one cow to Athena Nike, and then a hecatomb (a sacrifice of 100 sheep) to Athena Polias, on the large altar in the eastern part of the Acropolis. The great procession of the Panathenaea has been immortalized in the freeze of the Parthenon.

The Panathenaea stand out as a clear example of the greatness of ancient Athens and an enduring reminder to every one of us to enjoy life in the fullest.