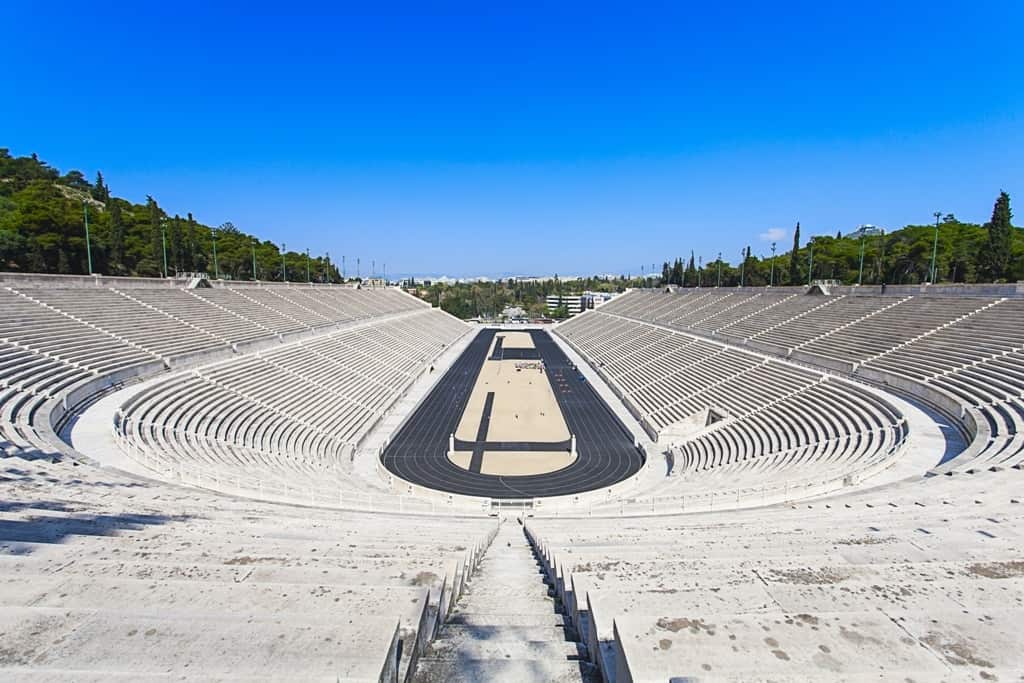 A guide to the Panathenaic or Kallimarmaro Stadium in Athens

The full title of this beautiful athletic stadium in Athens is the Panathenaic Stadium of Kallimarmaro meaning ‘made from beautiful marble’ and this is just one of things that makes this stadium special!

The Panathenaic Stadium is the only one in the world to be made entirely from white marble. The stadium was the setting for the first modern Olympic Games in 1896 and is also the place where the Olympic torch is handed over to the hosting country in a special ceremony.

The word ‘stadium’  comes from the Greek ‘stadion’ which was a measurement of approximately 185 meters – the length of the athletic track. The stadium was dedicated to Athena, goddess of wisdom and war.

During Roman times, in 140 AD, when Hadrian was Emperor, the stadium was renovated by the Athenian aristocrat Herodes Atticus, who rebuilt the stadium in white marble which was from Mt Pendeli. The shape of the stadium was changed to the typical Roman horseshoe shape with marble seating for 50,000 people and a large monumental gate (propylon) was erected at the entrance.

The stadium was lavishly decorated with marble monuments and there was nothing like it anywhere else in the world!  After some years, the stadium became abandoned, was stripped of its marble, and was left unused, until the 19th century.

It was at this time that Evangelos Zappa, one of the country’s wealthiest businessmen decided that the tradition of the athletic competitions should be revived and would do Greece well, but he knew that the government could not fund such an extravagant event. He and another rich businessman, George Averoff, funded the complete renovation of the stadium.

Once the Panathenaic Stadium was completed the first modern-day Olympics Games were held there in 1896. The number of spectators swelled from 50,000 to 80,000 to watch the Greek Athlete Spyridon Louis win the marathon. The Olympic Games were a huge success, and importantly, brought Greece back into Europe after 400 years of Turkish rule.

Since then, the stadium has had the nickname ‘kallimarmaro’ and hosted many sporting events. The largest to date was when the home team, AEK Basketball team defeated Stavia Prague in the Winners Cup 1967/8 in front of 80,000 supporters – this is the large number of spectators ever at a basketball game! To the delight of Athenian basketball supporters, the Harlem Globetrotters have also appeared at the stadium.

The stadium has hosted some memorable concerts by international stars Tina Turner and Bob Dylan as well as the popular Greek star, Sakis Rouvas. In November each year, the stadium is the finishing point for the Athens Marathon which is run from the city of Marathon to Athens.

Every four years when the Olympic Games are being held, the Olympic flame travels from Ancient Olympia, through Greece to the Panathenaic Stadium where there is a handover ceremony to the hosting country.

The Panathenaic Stadium is the only stadium to have hosted the Olympic Games three times. More usually, the stadium is used by local joggers and power walkers who enjoy the stadium’s stunning view of the Acropolis. If you would like to join in the fun, there is a daily run at the stadium between 07.30- 09.00.

Key information for the Panathenaic Stadium.

* The Panathenaic Stadium is situated just south-east of the National Gardens and east of the Temple of Zeus. The stadium lies just a short walk (5 minutes) from Syntagma Square in the centre of Athens.

* The nearest Metro stations are Syntagma (Line 2 &3) and Evangelismos (Lines 3). Both are just a few minute’s walk.