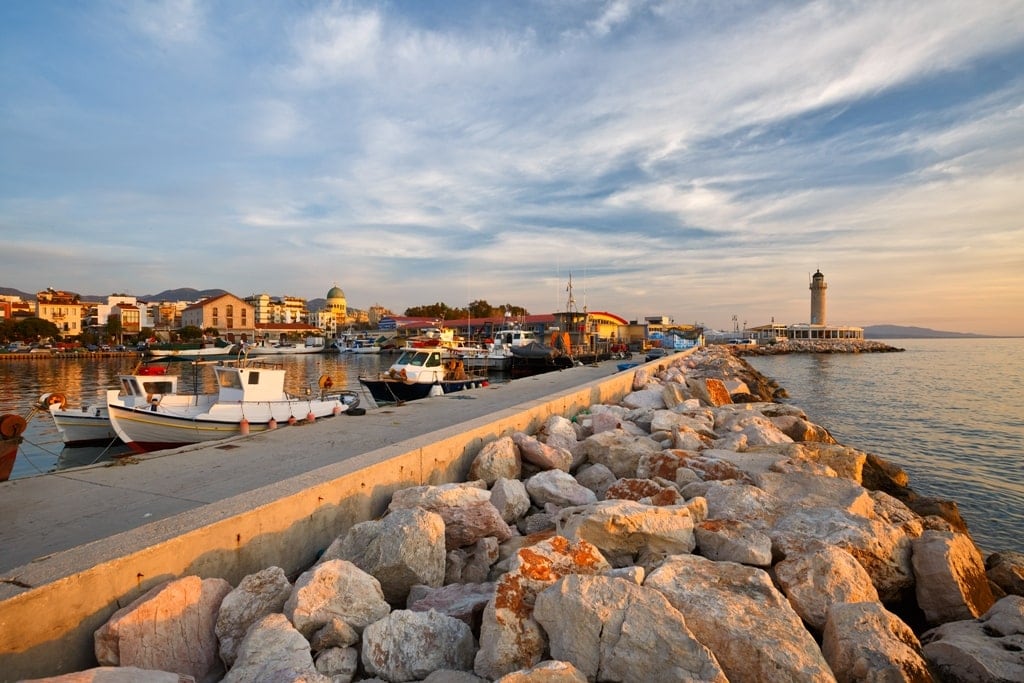 Most people seem to know Patra only as of the port city that will connect them via ferry to Italy or to the Ionian islands like Kefalonia and Corfu.

Most people, therefore, are missing out!

Patra is a worthy tourist destination, ready to be discovered by anyone who loves flexibility and variety in their vacations. And that’s because Patra has it all! From a rich history etched in the various archaeological sites and museums you can see, to a vibrant modern city life with unique events and a solid nightlife.

There are things to see, places to be, beaches to enjoy and events to partake in, so let’s dive in and learn why Patras should definitely be on your map when visiting Greece!

A Guide to the City of Patras in Greece

Patra is the third-largest city in Greece, located in western Greece, in the northern Peloponnese, overlooking the Gulf of Patras. It is 215 kilometers west of Athens. Its famous Rio – Antirio bridge connects the Peloponnese peninsula to the rest of mainland Greece. The Rio – Antirio bridge is one of the longest multi-span, cable stayed bridges in the world, and the longest fully suspended one! It is also called the “Charilaos Trikoupis” bridge, after one of Greece’s prime ministers.

Patra is also called “Greece’s Gate to the West” thanks to its very active port that connects Greece to Italy and through Italy to the rest of Europe, bypassing the Balkans.

Patra is known as a hub for culture. It was named European Capital of Culture for 2006. As such, Patra is a city where you can experience a lot more than just the standard (albeit already rich and vast!) Greek culture and heritage.

How to get to Patra

There are many ways to get to Patra once you arrive at Athens’ airport.

One popular way is by car, through the recently completed highway. The trip is around two hours long and you have to pay toll, around 14 euros.

You can also go to Patra by bus but be prepared to switch buses along the way: You must take the bus from the airport to Kifisos station, and there you will switch to get to Patra.

You can also take the suburban railway from Athens to Patras. You will need to switch trains at “Kato Acharnai” station.

Finally, you can book a taxi that will take you straight from the airport to Patras.

Things to Do in Patras Greece

Patras’ carnival aside, there are many things to do even if you don’t visit the city during the carnival season, and here are some of the best which should always be on the ‘must do’ list:

Inaugurated in 2009 and looking like a post-modern flying saucer on the outside, the Patras Archaeological Museum is must-see. It has been praised for the way it displays its artifacts, organized in three categories, in three big rooms: Private Life, Public Life, Necropolis. All artifacts ranging from Mycenean to Roman Greece are present in the same room according to these themes, almost giving you the feeling of a time-lapse in how people developed in their routines, customs, and technology.

The museum also boasts three fully reconstructed graves. Two are from Mycenean times, and one is from Roman times.

The Roman Odeon is a fully reconstructed, functional amphitheater in Patras’ upper town dating from the 1st century AD.

Try to visit it while also attending a musical event there to get the full experience, especially if you are lucky enough to have your vacations coincide with the annual Patra International Festival. But even if you can’t attend a music event, visit it for the gorgeous vistas and the beautiful restoration work that has been done.

Visit the Cathedral of Agios Andreas

The Cathedral of Agios Andreas is the largest church in Greece and the third largest one in the Balkans. It’s worth a visit not only for its size but also its beautiful turn-of-the-century interpretation of a Byzantine basilica. There are stunning mosaics to admire and frescoes all over the walls of great artistry. The Cathedral sits around 5,000 people and is dedicated to the patron saint of the city, St. Andrew, one of the 12 Apostles.

According to tradition, St. Andrew was martyred by crucifixion in the city of Patras. Within the church, his remains and pieces of the cross he was martyred on are kept, making the cathedral an international pilgrimage site.

The Castle of Patra sits at the top of the city and was built around 500 AD on top of the ancient ruins of the acropolis of Patra.

Go there to enjoy the breathtaking view of Patra and the channel. On a clear day, you will be surprised how far your eye can see!

The Castle of Patra was armed since the moment it was completed by all the forces in command of the area, from the Slavs, Franks, and Venetians to the Ottomans and even WWII troops of both sides. Thanks to that, when you visit the Castle you’ll be able to see a full range of the different technologies used over time, and a development of the art of warfare through the ages.

Achaia Clauss is one of the oldest and most famous wineries in Greece. Founded in 1861, it makes the best mavrodaphne in Greece, a uniquely flavoured, sweet, red wine. The old part of the winery is open to tourists, with demonstrations of how the wine would be made in those times.

The Turkish baths, also known as hammam, have been in operation in Patra since the 15th century AD. They are open to men and women and offer a unique experience of the public bath which you shouldn’t miss- relax, get rejuvenated, and resume your day all pampered up and rested!

Also called “Patra’s veranda”, the Spinney is a tree-covered hill, perfect to enjoy some shade after visiting the sites, while also taking in the gorgeous view of Patra and the channel.

There is a kiosk for tourists and several picturesque pathways for you to enjoy while basking in the sun or the shade, as you like.

Visit the House of Kostis Palamas

Kostis Palamas is one of Greece’s most renowned poets, and the poet who wrote the lyrics to the Olympic Anthem, the very Anthem that is sung today in the Opening Ceremonies of the Olympics every four years.

His 19th century neoclassical house is a museum, and one to visit to observe where he was born and the environment in which he was raised.

There are several beaches in Patra, and each one is unique! Here are the ones you should definitely keep on your radar:

About 1 kilometer away from Patra you will find its beach. It is fully organized, meaning you can do a range of water sports, enjoy your sunbed and sun umbrellas, get your coffee or your snack without trouble. But it also means that in summer it gets very crowded, so be advised.

Rio’s beach is huge, organized, with clean waters and small pebbles. It is perfect for families. You will find a wide range of tavernas and cafes that will cater to your needs before, during, and after your swim.

About 16 kilometers from Patra you will find Psathopyrgos village and its beautiful, quiet beach. Go for the spectacular, clean waters and stay for the fresh fish tavernas.

About 17 kilometres east you will find Kato Rodini village, and its gorgeous, pebbled beach. Rodini beach is preferred by families with children for its clean waters and generally quiet atmosphere. It is not organized so be prepared for that, though there are some bars and cafes where you can get your coffee or drink.

Patra’s Carnival begins on January 17th and ends on Clean Monday, which marks the beginning of Lent.

The carnival in Patras started 180 years ago and unlike all the other carnivals in Greece, Patra’s is not connected to ancient pagan rituals of the Ancient Greeks, or any events in the honor of Dionysus. Patra’s carnival is a solidly modern event that first started in 1829 with a high-class masquerade ball in a ballroom in a rich merchant’s mansion.

As more European influence impacted Patra, through French troops passing through and the annexation of the Ionian Islands, which had previously been under Italian rule, Patra’s Carnival evolved into a huge extensive event that went far beyond rich people’s ballrooms and into the streets.

By the 1870s, there were carnival parades with floats. Nowadays, these floats are often satirical of current events within Greece but also around the world. By the turn of the century, the custom of the “egg wars” had developed, where carnival-goers stuff confetti in wax eggs to throw at each other from balconies. In modern times, the egg wars developed into chocolate wars, where people from balconies or on floats throw chocolates at others.

Nowadays, Patra’s Carnival is done under the funding and auspices of the Municipality of Patra.

On January 17th, there is the Opening Ceremony which involves a town crier on a float calling all the people in Patra to assemble that evening. The message is usually delivered in a satirical manner, setting the theme of the carnival. The program, however, is kept secret until the last moment, so the whole day is full of surprises, including events like pantomime, dances, fireworks, and music.

Patra’s carnival includes specific events such as the Children’s carnival, the Treasure Hunt Game, the Saturday Night Parade, the Grand Parade, and the Closing Ceremony where the float of the Carnival King is burned. Around these events there are several more that take place in various clubs, cafes, tavernas, squares, and even street corners, so make sure you don’t miss out!

Where can I go from Patra?

Patra is the Gateway to the West, as already mentioned! You can take a ferry to Bari, Italy. You can also get to the seven gorgeous Ionian islands, namely Corfu, Zakynthos, Lefkada, Ithaca, Paxi, Kefalonia, and Kythera!