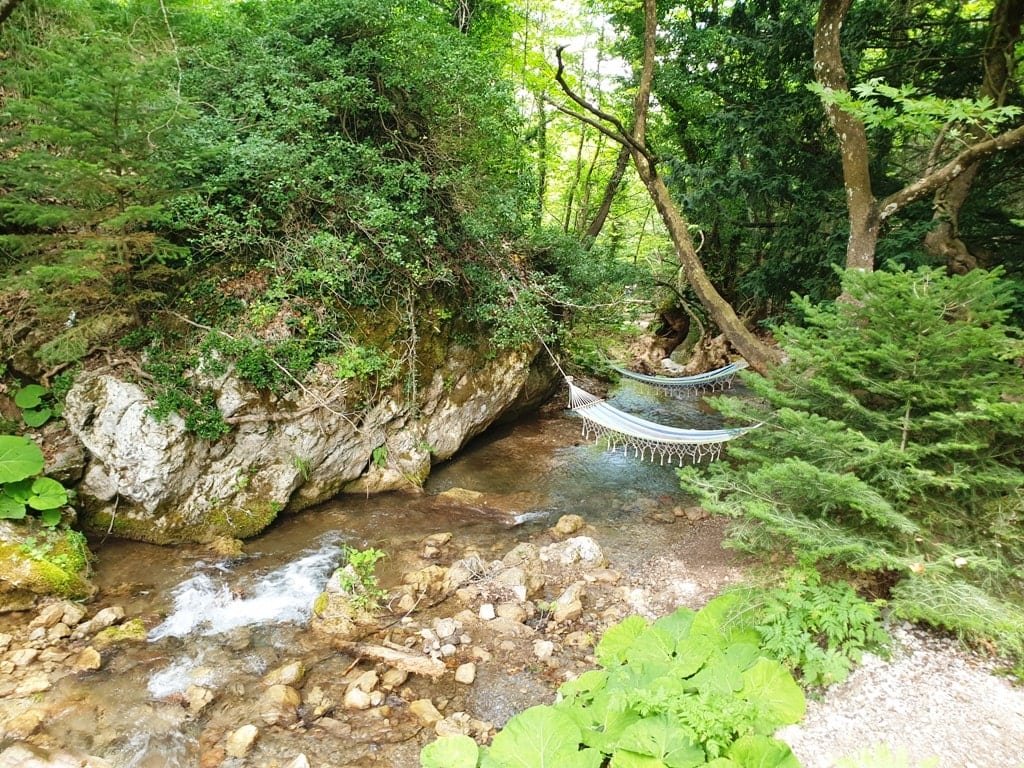 Not many have heard of the gorgeous Pavliani village, but that is swiftly starting to change! Pavliani is one of the most beautiful mountain villages of Greece, ensconced in the lush, green, breathtaking forests and sharp mountain slopes at the beginning of Mt. Oeta’s National Park, with unforgettable views.

Pavliani is a wonderful place to visit for all lovers of nature, but also lovers of adventure, heritage, history, and authenticity! It is also called “the most drawn over village of Greece” because there are literally drawings, handwritten mottos, and paintings over its walls and common areas, painted by the village’s teacher and her students. And that’s just one of the wholesome things you will get to see there, surrounded by storybook beauty.

Pavliani is located on the slopes of Mt. Oeta, in the regional unit of Phthiotis, in mainland Greece. It is actually split in two, Ano Pavliani (Pavliani Above) and Kato Pavliani (Pavliani Below). The village is almost on top of the Asopos River, so water is abundant.

You can get to Pavliani mainly by car. The drive technically takes around two hours from Athens, but factor in traffic jams in various nodes as you travel, which may make your journey somewhat longer.

The drive itself is easy and picturesque. You take the Athinon-Lamias highway and carry on until you take the Bralos exit. From then on, you will be treated to canvas upon canvas of gorgeous landscapes of the beautiful Phthiotida countryside, so make sure you travel when there is ample sunlight for maximum enjoyment.

You can also go by train up to Bralos station, and then get a taxi to the village. This route will be around 2 hours 30 minutes until Bralos, and then about 30 minutes to an hour, depending on traffic, for the last 35 km to Pavliani by taxi.

Another option is to go by KTEL bus straight to Pavliani! There are also many private day trips by bus to Pavliani if you’re interested to take a tour of the entire Phthiotida region and its assorted beauties.

Pavliani’s climate, like all of Greece, is Mediterranean, which means rainy, relatively mild winters and hot, dry summers. However, the village is a mountain village, so winters tend to be somewhat colder and summers somewhat cooler. Expect regular snow in Pavliani!

That said, always remember to wear your sunscreen, the sun remains unforgiving!

A short history of Pavliani

Pavliani’s history is lost in the sands of time. The location is intertwined with legends of Ancient Greece’s most prominent demigod heroes, Heracles (aka Hercules). According to legend, that’s where the hero went to die when poisoned by the clothes his wife Deianira unknowingly gave him in an effort to keep him loyal to her. He threw himself in a huge bonfire made for a quicker ending than the terrible pain of the poisoned clothes, and after that Zeus made him ascend to Olympus.

Very near the current village of Pavliani, at the Katavothra plateau, there are the remnants of the temple to Heracles, called “Pyra Irakleous” (i.e. “Fire of Heracles”) that was erected to commemorate that event.

The name Pavliani also has a significant history. It is said that the village’s dwellers were the first ones to believe in the teachings of Apostle Paul, hence gave his name to it.

During Medieval times it was part of the territory of Siderokastro (i.e. “Iron Castle”) of Oeta, which became part of the Duchy of Athens, and later was taken over by the Catalan Company sometime in the 1300s, and remained under their control until the Ottomans took over in the late 1300s.

Pavliani became the seat of the first region of the newfound Greek State after the Greek War of Independence of 1821, but later in different regional designs lost that status.

During WWII, there was a ferocious battle between the occupying Italian forces and the Greek Resistance in 1943, called the Battle of Pavliani. The Greek Resistance won decisively, clearing the Italians from the area. A commemorative monument and plaque with all the fallen can be seen at the entrance of Kato Pavliani.

If you like a relaxed, fun adventure surrounded by nature but also filled with different easter eggs for you to find, then you are in for a treat in Pavliani!

Swing by the waterfall

Just entering the Park of Pavliani you know you’re in for a good time for all ages: a picturesque swing set invites you to play while you enjoy the view of the lovely waterfall nearby. After you have had your fun to the cool sounds of crystal-clear water, you can walk on further in.

Be surrounded by stunningly beautiful nature

You will be enjoying the cool shade and the refreshing sounds of the creeks of the Asopos River, surrounded by big chestnut, platan, maple, and walnut trees with lush, far-reaching branches.

When you need to cross the Asopos river, you will use the musical bridge! It’s a small wooden rope bridge that looks like it’s made of piano keys. Every step you take on it will produce a note. It’s like magic! But careful, you’re not allowed to hop on it, so don’t try to play Chopsticks on the bridge!

Visit the Museum of Hydrokinetics

Further along, you will come across the Museum of Hydrokinetics, where you will see various mechanisms solely powered by the power of water, built of stone and iron, and perfectly fitting in with the environment.

If you want a respite, there is an area with hammocks and wooden sunbeds you can use- with the hammocks swinging right over the river waters!

Because you will be walking for a bit as you explore this amazing Park, your feet might need some respite and pampering as well. What better way to do that than dunk them in the soothing waters of the Asopos river? There’s a dedicated wooden dais over the river, complete with chairs and a hole in the center for you to do just that in absolute comfort. If there are many people, you can even make friends!

If you walk deep enough in the Park, you will be rewarded with the most famous pop-culture thrones: the Game of Thrones Iron Throne, for you to sit and survey your kingdom- for a bit.

The Iron Throne is strategically placed to offer you one of the best and most gorgeous of sweeping views of the entirety of the National Park, so don’t miss out!

Yet another place to earn your respite and rest, the Camara cave is a wonderful stop in your walk through the park. Discover it and the care the locals have put there to offer tired hikers a well-earned rest!

Find all the games and contraptions

It would be enough, but it doesn’t stop there! In the Park, there are a lot of games and activities to discover, from cable cars that take you for a ride over the river to even a jacuzzi, an area to take a swim in the river, designated places for river volley, and a lot more!

Finally, once you have had your fill of adventures and cross through the entire Park, you can bunk down at the Oita Refuge for hot (or cold) rejuvenating drinks and snacks.

Beware of the trolls

Everything in Pavliani has been done with a lot of love and fun, and it shows! Make it a point to have a local with you so that you can read the various signs scattered all around the Park and the village, full of tongue-in-cheek satire, and potentially scary (but obviously untrue) warnings that are there just for fun.

Relax in a beautiful village

Pavliani is itself beautiful, with characteristic mountain village architecture, beautiful wooden roof and stone houses, paved streets, and very shaded squares. There are a lot of restaurants and café’s that will treat you to local delicacies and authentic, fresh food from the land as the locals are very heavily involved in agriculture with top quality produce from meat to fruit to legumes.

In Pavliani you will also have the chance to visit the church of St. Athanasios with the tall stone belltower and beautiful, wooden iconostasis with its symbolic reliefs which date from the 19th century.

If you go to Pavliani during the summer, make sure to time it so you can partake in the “Sounds of the Forest” festival that takes place on a beautiful plateau with a wonderful view right next to the village, with rock and pop music. Afterward, you can even camp in the area.

No matter when you choose to visit Pavliani, during the summer when it’s lush and green, or during the winter when it’s a magical winter wonderland, you will have an unforgettable, amazing time!