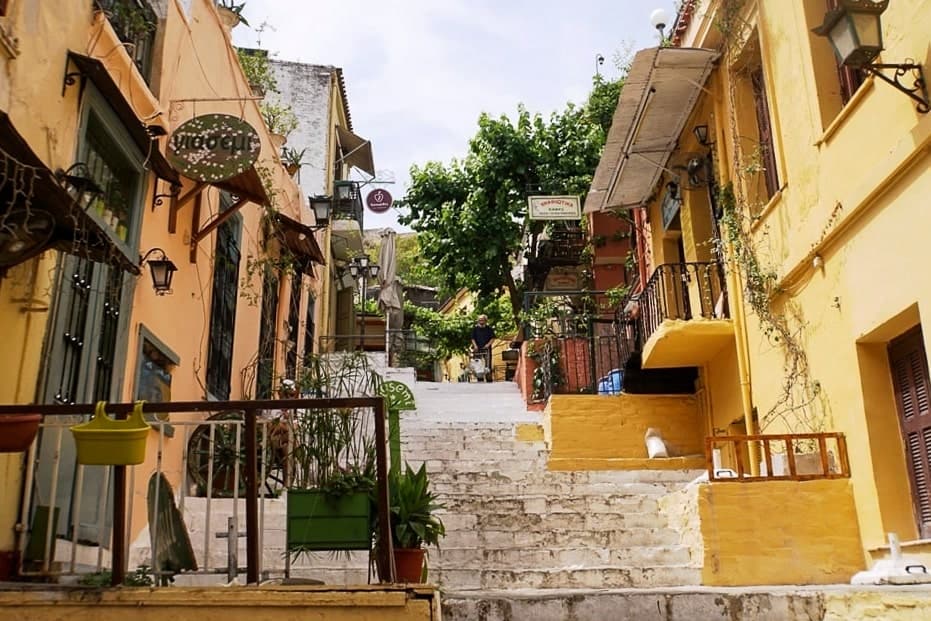 One of the favorite neighborhoods of both locals and tourists is Plaka, which is the area extending from the elegant Makrigianni district to the Temple of Olympian Zeus and leading to the lively Monastiraki neighborhood. Plaka is often referred to as the “Neighborhood of the Gods” because it is located on the North-Eastern slopes of the Acropolis hill. Its charm comes from its ancient and picturesque cobbled streets lined with beautiful neoclassical mansions and some typically Greek white houses.

A Guide to the Plaka Neighborhood in Athens

Plaka has two large pedestrian streets named Kydathineon and Adrianou. The first one starts close to Syntagma Square and it is the first street intersecting Ermou, which is the main shopping area of the city center.

Adrianou starts from the nice Monastiraki square and it is the largest and the most touristy street of Plaka. It divides the neighborhood into two parts: Ano Plaka (the upper part, which is closer to the top of the Acropolis) and Kato Plaka (the lower part, which closer to Syntagma Square).

Today, Plaka is mostly “invaded” by tourists and, for this reason, you’ll find a great number of souvenir shops, typical restaurants, cafés, and other facilities. Nevertheless, it is one of the most interesting and vibrant areas of Athens, including several points of interest and attractions that are worth a full day of sightseeing.

What to do and see in Plaka

A smaller area of this large neighborhood is named Anafiotika and it is very much appreciated by visitors for its white houses lined along its narrow winding alleys. The houses are decorated with some blue details, bougainvillea flowers, and they usually have a sunny terrace and a maritime flair.

That’s because this area was built by the workers from the Cyclades that moved there to work on the construction of the Royal Palace in the 19th century. The name of the area refers to Anafi island, which was the place of origin of the majority of workers and you can really feel the island atmosphere while walking there!

Check out some amazing archaeological sites

Visit the best museums of the area

Learn more about Greek religious traditions in the local churches

The Ottoman period left some important pieces of heritage, not only in terms of monuments and churches, but also in terms of cultural habits like going to the hammam. If you are staying in Plaka, visit the Al Hammam Traditional Baths (16, Tripodon) and enjoy some rest and wellness treatments after your sightseeing! This hammam offers traditional treatments in a typical environment. For more information visit  https://alhammam.gr/

Plaka is the best area of Athens to buy your souvenir since it’s full of gift shops at every corner. Do you need any suggestions? If you have a medium to high budget, choose some handmade jewelry reproducing ancient jewels and ornaments.

A typical souvenir is also a reproduction of an ancient object like a decorated vase. If you are a food lover, choose some typical products like olive oil, honey, wine, or ouzo, which is the local anis-flavored liquor. The main shopping street in Plaka is Adrianou which has tons of souvenir shops, handicraft shops, and food shops for any budget and for all tastes.

Art is everywhere in Plaka and you’ll find it on its walls too! You’ll frequently bump into some nice examples of street art hidden among the narrow alleys. Street artists even reach the picturesque Anafiotika area, where some modern graffiti live side by side with the traditional island buildings.

Watch a movie under the stars

Plaka is the perfect place to spend a night out in one of its many traditional restaurants but there are also some things you can do later in the evening. Try watching a movie outdoor, on a rooftop garden overlooking the Acropolis! You can do that at Cine Paris (Kidathineon 22 ). It is open every day from 9 p.m. and from May to October. You’ll probably find a retro movie in English (or with English subtitles) and you can also wander in its vintage poster store downstairs.

Where to eat and drink in Plaka

Where to stay in Plaka