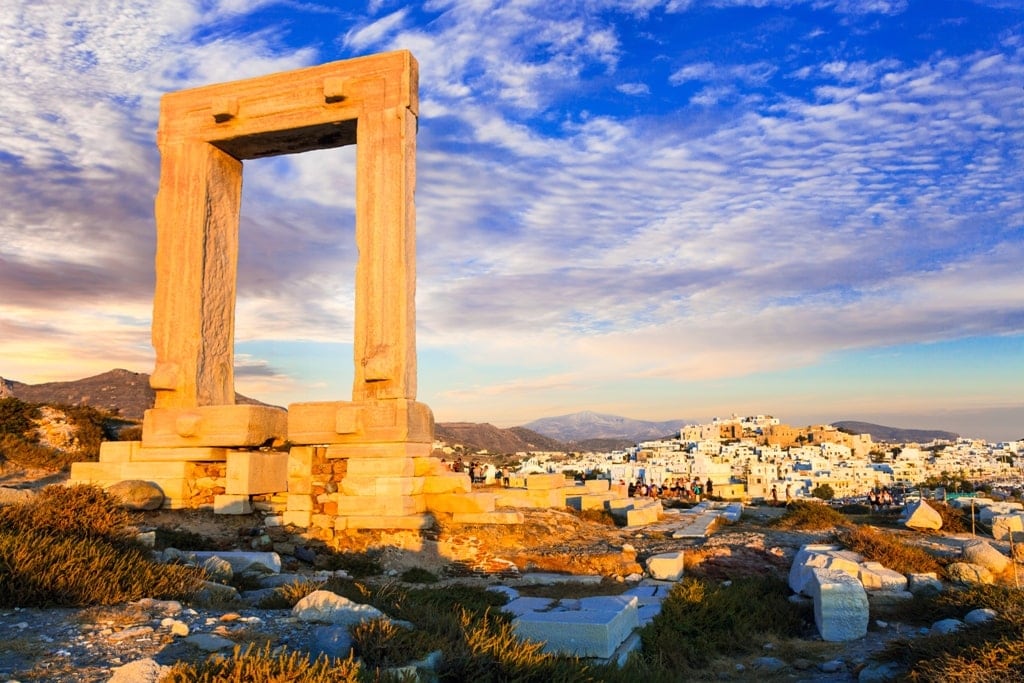 Standing proudly as the jewel of the island of Naxos, the Portara, or the Great Door, is a colossal marble doorway and the single remaining part of an unfinished temple of Apollo. The gate is considered the island’s main landmark and emblem, and it is standing on the islet of Palatia, at the entrance of the Naxos harbor. According to myth, that was the island where Ariadne, the Minoan princess, was abandoned by her lover, Theseus after he managed to kill the Minotaur, the infamous beast dwelling in the labyrinth of Crete.

Around the year 530 B.C., Naxos was standing at the peak of its glory and power. Its ruler, Lygdamis, wished to build the highest and most splendid building in all of Greece on his island. He thus initiated the construction of the building, according to the specifications of the temples of Olympian Zeus and of the goddess Hera on Samos. The temple was supposed to be Ionic, 59 meters long and 29 meters wide with a peristyle of 6×12 columns with double porticos at its end.

Most researchers believe that the temple was to be built in the honor of Apollo, the god of music and poetry, since the temple faces in the direction of Delos, believed to be the birthplace of the god. However, there is also the view that the temple was dedicated to the god Dionysus since the islet of Palatia is associated with him. It is said that Dionysus abducted Ariadne at the beachside of Palatia, and thus the islet is considered to be the place where Dionysian festivities were first held.

In any case, a few years after the initiation of the construction, a war broke out between Naxos and Samos, and the work stopped abruptly. Today, only the massive gate still stands intact. It comprises four marble parts, weighing about 20 tons each, and is around 6 meters high and 3.5 meters wide. During the Middle Ages, an arched Christian church was constructed behind the Portara, while during the Venetian rule on the island, the gate was dismantled so that the marble could be used to build a fortress, named Kastro.

Due to its massive size, Portara was too heavy to be completely dismantled, and thankfully of the four columns three have survived. Today, Naxos’ Temple of Apollo – Portara is connected with the Naxos mainland via a paved footpath. The location still offers a unique view of the nearby area, where every visitor can enjoy the majestic view of the sunset.