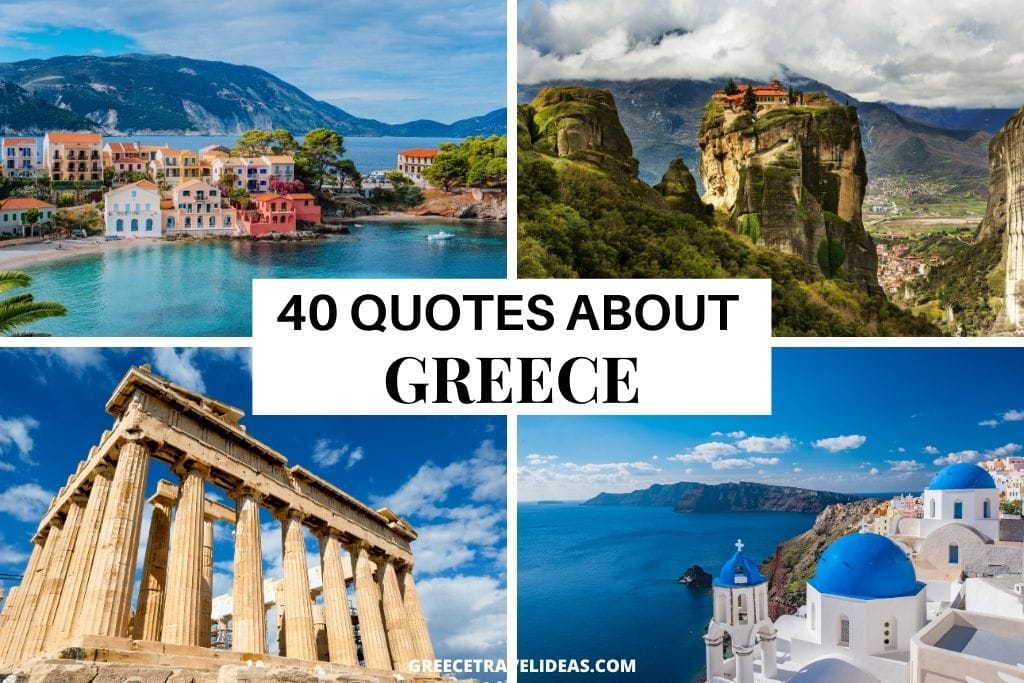 One of the most beautiful countries in the world, Greece has inspired philosophers, poets, and writers since the dawn of civilization. These inspiring quotes about Greece pay tribute to its people, its food, its history, and everything else in between. As you read, you’ll be transported to the whitewashed domed houses of Santorini, the Acropolis of Athens, or soaking up the aroma of garlic and seafood in a cute Greek taverna. So, without further ado, let’s begin your Greek vacation!

I knew that no matter what door you knock on in a Cretan village, it will be opened for you. A meal will be served in your honor, and you will sleep between the best sheets in the house. In Crete, the stranger is still the unknown god. Before him, all doors and all hearts are opened

And then God said, let there be Greece.

The Greeks created gods that were in their image; warlike but creative, wise but ferocious, loving but jealous, tender but brutal, compassionate, but vengeful

There is a kind of flame in Crete – let us call it ‘soul’ – something more powerful than either life or death. There is pride, obstinacy, valour, and together with these something else inexpressible and imponderable, something which makes you rejoice that you are a human being, and at the same time tremble

Greece has got something like 1,400 islands. There is so much of Greece you can’t even know even if you’re Greek. It’s sprinkled out all around the edge of the Aegean, all over the place. It’s already a secret place wherever you go, even if it’s somewhere huge like Athens or Corinth. The place enchanted me.

It is no wonder that historians trace the birth of Western civilisation to these jewels of the Aegean, Ionian, and Mediterranean seas. The Greek Isles are home to wide-ranging and far-reaching cultural traditions and mythic tales, not to mention the colourful history and unforgettable vistas that still draw thousands of tourists to the region every year

You know, it is said that we Greeks are a fervent and warm-blooded breed. Well, let me tell you something – it is true.

Greece was a muse. It inspired creativity in magical ways that I can’t even begin to understand or explain.

The problem with Greece is that she’s just too beautiful

Today, to walk along the pebbled pathways of a traditional Greek mountain village or the marbled streets of an ancient Acropolis is to step back in time” – Laura Brooks

Greek food is one of the main reasons to visit Greece. Find here some fun quotes about Greek food.

Right now, I’d love to be sitting on a Greek island somewhere because of being Greek American, eating great octopus salad and some fantastic lamb. Or sipping a little ouzo. I think the Mediterranean diet is one of the healthiest…lots of nuts, vegetables, fruits, fresh fish, lean meats, yogurt.

Get ready for wine, raki, and getting hand-fed by strangers.

Athens, the capital of Greece is a must-see destination in any Greece itinerary. Here are some interesting quotes about Athens, Greece.

I am not an Athenian or a Greek, but a citizen of the world.

If Athens shall appear great to you, consider then that her glories were purchased by valiant men, and by men who learned their duty.

I will not allow the Athenians to sin twice against philosophy.

Maid of Athens, ere we part, Give, oh give me back my heart!

Quotes about the Greek Language

The modern Greek language is descendant of the ancient Greek language and has a long history spanning 34 centuries. Find here some interesting quotes about it.

The Greek language seems different than other languages. I’m not the only person to think this. Usually, I come up with some kind of dopey metaphor for why it’s different. But it seems, somehow, more original, more like being in the morning of language.

If the violin is the most perfect musical instrument, the Greek language is the violin of the human thought