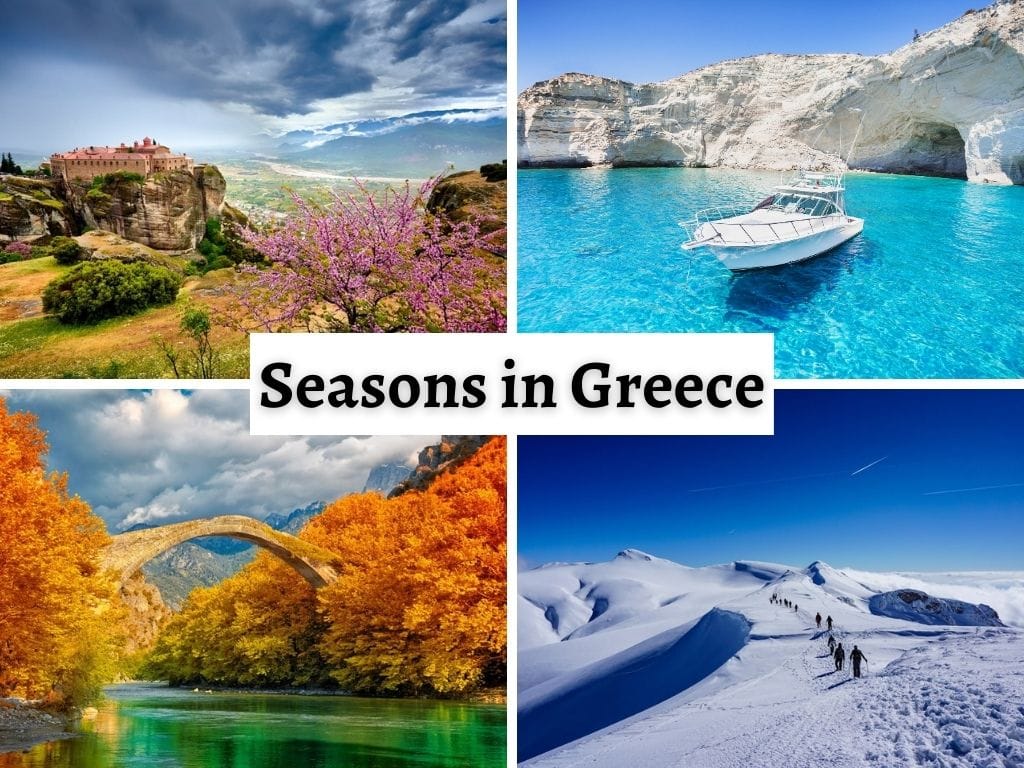 Greece is mostly associated with the famous and highly popular “Greek Summer”. With good reason! Summer in Greece is a paradise of heat, blessed shade, iced coffee, and chilled cocktails. It’s a kaleidoscope of warm vibrant nights full of experiences you will cherish for a lifetime. Greece’s summer is unique and experiencing it anywhere in the country is a dream!

But what is not common knowledge is that all four seasons in Greece have their own charm and allure. Greece is a gorgeous country, and every season’s dress on her looks beautiful, with charms and characteristics you can’t experience any other time.

It could be said that each season in Greece is a gem in a jewelry box of natural, cultural, and historical beauties.

Greece is multifaceted, and as such, the seasons in Greece manifest differently. Winter is vastly different in the south than it is in the north of Greece, for example. All the more for you to discover, around the year!

How is, then, the weather in Greece in each of the four seasons, and what should you look out for if you happen to be there at the time?

Spring in Greece is full of fragrances. In most cities, including Athens, the sidewalks are paved, but with special spaces for citrus trees to grow. Lemon trees, orange trees, tangerine trees dominate, and during Spring they are in full bloom. During the night, if you go for a stroll, you will be surrounded by ethereal fragrances carried over by the breeze. Unless you have smelled it yourself, there’s very little that can be said to describe this unique natural perfume that permeates the cities.

Spring’s temperature is ‘just right’: not too cold, as in winter, nor too hot, as in summer. Comfortably warm clothes will be more than enough, and the sun’s warmth is welcome on your back. This makes Spring the best season for long strolls in the sun, and as such for thorough, extensive exploration of all extensive archaeological sites, of which Greece has plenty. You will have the added bonus with the eruption of color, as everything is green and full of wildflowers of all types.

Spring roughly begins in March and ends in May. It is associated with very important anniversaries for Greeks, including the Greek Orthodox Easter and the national holiday of the Greek Independence Day, which is celebrated in great pomp and circumstance.

Summer in Greece is relentlessly hot! Heatwaves where the temperature spikes to 40 degrees Celsius are the norm, and as such noon siestas are not only necessary, but they are also important for your health: even if you don’t sleep, you should stay indoors or choose an especially thick shade.

Summer can be somewhat cooler in the mountains and towards the north, so it might be a good choice to combine mountain with seaside vacations during Summer in Greece, by choosing to go to places like Mt. Pelion on the mainland rather than the islands, if heat is something that affects you.

Summer is the season of an astounding array of succulent, home-grown fruit and vegetables, which you should not miss out on! It is the season of hot sand, warm or cool seawater, long lazy days lounging to the sound of the cicada serenades, and of course, the time to explore the exotic beaches that Greece boasts all over its coastline, and on every single island.

Summer in Greece technically begins in June and ends in August, but locals know it carries on well into September, and frequently keeps as late as October! Keep that in mind when you make your bookings!

Autumn in Greece technically begins in September and ends in November. In essence though, Autumn in Greece is the sweet waning of Summer. The sun is still hot, but it is mellowing out, gradually losing its scorching bite. Like during Spring, now is the best time to go on long walks in the sun and explore the big archaeological complexes that require you to stay hours away from the shade.

That’s why the tourist season in Greece lasts throughout October! You have the chance to enjoy the best of Summer without the hazards of heatstroke or needing a sun hat at all times. Autumn in Greece is the season of chestnuts and roasted corn on the cob, of big flowers, of pomegranates, and grape harvest. Many celebrations and traditions revolve around the harvest, and you can share in on the experience if you happen to be there!

Autumn is also the season of the second major national holiday, the famous “Ohi Day” commemorating Greece’s entry in WWII.

Autumn is also the season of the “first rainfalls”, though often they don’t come until its very end. Still, be prepared for them, too! Average temperatures for Autumn range from around 19 to 29 degrees Celsius in the beginning, to 15 to 24 degrees Celsius towards the end.

Greece transforms into a winter wonderland when Winter rolls around, which can take on many forms. In the northern areas of the country, snowfalls are annual, regular, and heavy. As you move towards the south, snow becomes scarcer and rarer, but not impossible to encounter- but it is mostly replaced with rain. Winter rainfalls in Greece can be very heavy and intense, and so can the winds.

That said, they are not the daily norm! What you will usually experience in Winter is the blindingly bright sun which, however, offers no warmth and may fool you into not bundling up properly- what the locals call “teethed” or “fanged” sun.

If you find yourself in Greece in Winter, you will enjoy the true vibrancy of Greek culture, as it feels and looks when it caters to the locals, rather than the tourists. You will best enjoy your time there if you are with Greek friends or a Greek family that will introduce you to all the customs and celebrations of the Winter, from St. Nicholas to Christmas.

Winter is a good time to visit highly popular archaeological and other touristy sites, without the throngs of tourists flooding them. And of course, you will have the unique opportunity to enjoy Greece’s snowy folklore villages, coupled with their delectable hot beverages and food: from honey wine with cinnamon to honey raki, to hot melted feta cheese seasoned with peppers and baked in the fireplace.

Winter typically begins in December and ends in February. December can be quite mild in terms of cold, with January and February being the fiercest.