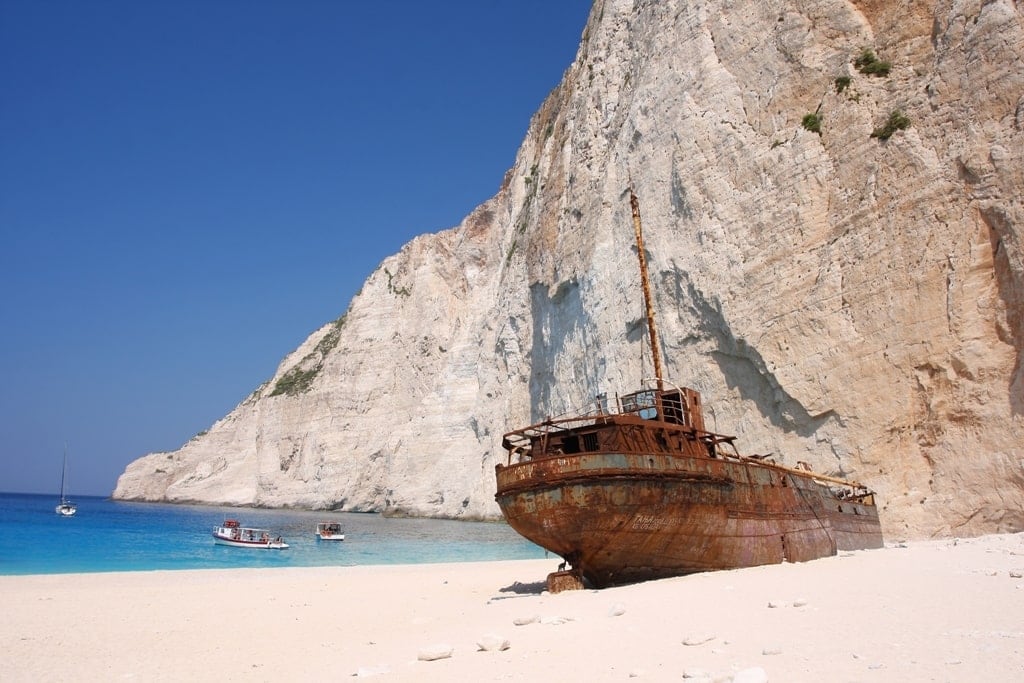 The stunning beaches of Greece are always in the spotlight of travel destinations for the summer holidays. What is less known, is that some of these great beaches have stories of shipwrecks to tell. Stories of mystery and secrets, narratives about smugglers and illegal trade, with disappearances and unexplained events. You can visit these spots and explore the rusty remnants of history for yourself while enjoying the beautiful scenery and crystal-clear waters. Here are the best shipwrecks in Greece:

9 Amazing Shipwrecks to Discover in Greece

Navagio Beach on the beautiful Ionian island of Zakynthos is the most famous shipwreck in Greece and a top destination worldwide. The magnificent location is one of the most photographed places in Greece, with its astonishing bright blue waters, the imposing shipwreck, and the endless golden sand.

The remote cove of the island is also known as the “Smuggler’s Cove”, given to it because of the story behind the shipwreck, which happened in 1980. The ship is called “Panagiotis” and it was left stranded onshore after exposure to extreme weather conditions and an engine fault.

The vessel was used for the smuggling of cigarettes from Turkey, known to have carried cargo of a total value of 200.000 drachmas (previous currency of Greece) which were to be sold in the open waters of Tunisia! The story also makes reference to some Italian hostages and conspiracies that led to its unfortunate ending.

The sandy beach now hosts the remnants of this exciting story for those adventurous enough and willing to explore more. It is only accessible by sea, and there are various boat trips from nearby villages for daily excursions. The boat trips from Porto Vromi and the village of Volimes are the shorter ones, lasting only 20 minutes.

Tip: For the best photographs, visit the viewpoint of Navagio beach up on the steep cliff, whose panorama is breathtaking!

In Gytheio, you can find ‘Dimitrios’, a 67-meter-long ship, sunk and rusty, quite near the shore, easy to explore up close and swim nearby. The ship was left stranded there in 1981, on the beach known as Valtaki.

Explore the rusty wreck by getting as close as you wish, as it is stranded in safe and shallow waters. Rumour has it that this ship, like the one in Navagio of Zakynthos, was used to smuggle cigarettes, from Turkey to Italy. When the operation went wrong, the ship was evidence that had to be set on fire!

The beach has white sand onshore, but some rocky formation on the seabed. You can find a café-bar near the beach, and many others along the way, so amenities are provided. There are no umbrellas and sunbeds, however, so you can either bring your own beach equipment or go freestyle.

Tip: It is best to visit it in the early afternoon, explore it and then take amazing shots of the wonderful sunset.

Another popular shipwreck is situated on the coasts of the wonderful island of Amorgos and has been featured in films thanks to its beauty. The ship was named “Inland”, which is still discernible on the boat, but was later renamed “Olympia.”

The story behind the ship, according to the oral history of the locals, is that the ship approached the island in February 1980, its captain looking for an anchorage or a protected cove to avoid the rough sea beaten by strong north winds. In his effort, he reached the cove of Liverio near the Kalotaritissa beach, where the ship crashed with the rocks, although thankfully no casualties occurred.

The spot is popular for diving, but the access is not easy, as it is via a dirt road that requires a suitable vehicle. You can then reach the stunning wild beach by descending a natural path. The beach is pebbly and quite small, but its remote location protects it from crowds, so it has remained untouched and unorganized. Before you visit, keep in mind there are no amenities whatsoever.

A wooden shipwreck can be found in Skyros, the stunning island opposite Euboia with its transparent blue waters. The beach is named Agalipa, situated next to the beach of Agios Petros, accessible only by sea or on foot via a natural path through the pine forest if you follow the signs from Agios Petros.

It took its name from the remnants of the wooden ship, which according to local stories was used to carry up to a hundred immigrants from Turkey to the port of Kymi in Euboia. Rough weather and the dangerous Aegean waves trapped it close to the coast of Skyros, where the captain tried to beach his boat and give an end to the perilous journey.

Nowadays the shipwreck lies ashore and rots in the sun and saltwater, creating a unique landscape with its vibrant colors contrasting with the crystal-clear blue and turquoise waters. The scenery is surely worth a visit, as it is remote and unspoiled. The beach is pebbly and the seabed has rock formations.

There are no amenities nearby, so bring your own food and refreshments if you plan on spending the day.

The Gramvousa island, north of Crete, is visited by thousands annually, due to its unique beauty and wild landscapes. It is perfect for diving and spearfishing enthusiasts, as well as nature lovers and explorers. Next to the port of Imeri, on the little Gramvousa island of Crete, you can find the ‘Dimitrios P.’ shipwreck, half-sunken on the southern coast.

The story of this rusty boat goes as back as 1967, when this 35-meters-long ship was used to carry over 400 tons of cement from Chalkida to Northern Africa. During its trip, it met with bad weather conditions and stopped to drop anchor in Diakofti Bay in Kythira.

After that, the trip began again, and yet the weather got worse, the storm leaving no choice but to temporarily drop both anchors near Imeri in Gramvousa, just 200 meters from the coast. The anchors could not hold fast during the battering storm, and the captain decided to take control of the ship with the engine, which failed and the ship half-sunk. Thankfully, the crew disembarked with safety.

The shipwreck is now another highlight of the magnificent island of Gramvousa, lying on a wonderful coast with no amenities, isolated and untouched. The region of Gramvousa is also a Natural Reserve protected by Natura 2000, with Mediterranean seals and endangered Caretta-caretta sea turtles. That is why an overnight stay is not allowed on this island.

The relatively unknown island of Karpathos, although not usually a popular tourist destination, has hidden gems to uncover, mainly stunning beaches, and a secret shipwreck, whose name and origin is a mystery.

On the south-western tip of Karpathos, near the beach of Afiartis, there are rocky stretches of shore by the name of Makrys Gyalos, where the rusty old ship lies stranded. Rumour has it that it was an Italian cargo ship that was abandoned there after sinking during the half of the 20th century. It is located very close to the airport, therefore easily accessible by road.

In the Cyclades of the Aegean Sea Andros is a picturesque island of wonders with nature and lush vegetation, high mountains, and an endless blue. On the northeastern part of the island, near Vori beach lies yet another rusty old wreck, beaten year by year by the meltemia.

The ship is quite long and well-preserved for everyone to discover, close to the shore but not reachable without a bit of a swim. The deserted rocky surroundings add to the haunting atmosphere that surrounds it. Its story, however, remains a mystery, although locals may know different versions.

The shore is accessible by dirt road, and there are no facilities on the unorganized beach. The pure nature and the broken beauty of the Semiramis shipwreck are surely worth the visit, though!

In Peristera, an uninhabited island eastern of Alonissos with wild nature, you can find beautiful beaches and this hidden shipwreck.

Well, because Alonissos has an underwater shipwreck that is most popular. In 1985, a fisherman discovered the remnants of a shipwreck with about 4.000 amphorae carrying wine dating back to the classical period (425 B.C). This shipwreck lies 30 meters below sea level and requires diving equipment to reach.

But this shipwreck in the Kalamaki region is left half-sunken in the mirror-like waters of a beach which is accessible only by sea, as the island is uninhabited. This shipwreck carries a different story. It was a ship used to bring supplies from Alonissos, hence named “Alonissos”, which sunk for reasons unknown, and remained there to turn to rust.

On Peristera, there are no amenities whatsoever, and if you decide to visit the small island, you can rent a boat, your own, or a group boat to and from Alonissos. The location is perfect for snorkeling and does not require any diving experience to explore the contemporary shipwreck.

Last but not least there is the Epanomi shipwreck just 35 km outside of Thessaloniki, situated at an outstanding location, not similar to other Greek shores. The sandy dunes of Epanomi beach are decorated with a perfectly shaped sandy triangle, that divides the landscape into two similar beaches.

The shallow waters around are perfect for swimming and exploring the fully visible shipwreck left stranded there on the shallow sea-bed. Half of it is sunk inside the water, accessible with a single dive, and the tip is still above sea level.

What’s the story behind it?

This vessel was used to ferry soil from one shore to the other, which unfortunately led to the destruction of the natural habitat of the flora and the fauna, now considered a natural reserve. This happened when Greece was under dictatorship for touristic purposes, but with devastating effects. Thankfully, these activities stopped and the ship was left unused by the operating company in the 1970s. Henceforth, the ship turned to rust and sank in the shallow seabed.

Now it decorates Epanomi beach, which is remote and offers no amenities, so make sure to bring your snacks if you wish to explore it. The shipwreck is perfect for non-expert enthusiasts, as it doesn’t require diving, only decent snorkeling gear. The sea is accessible via a mild dirt road.