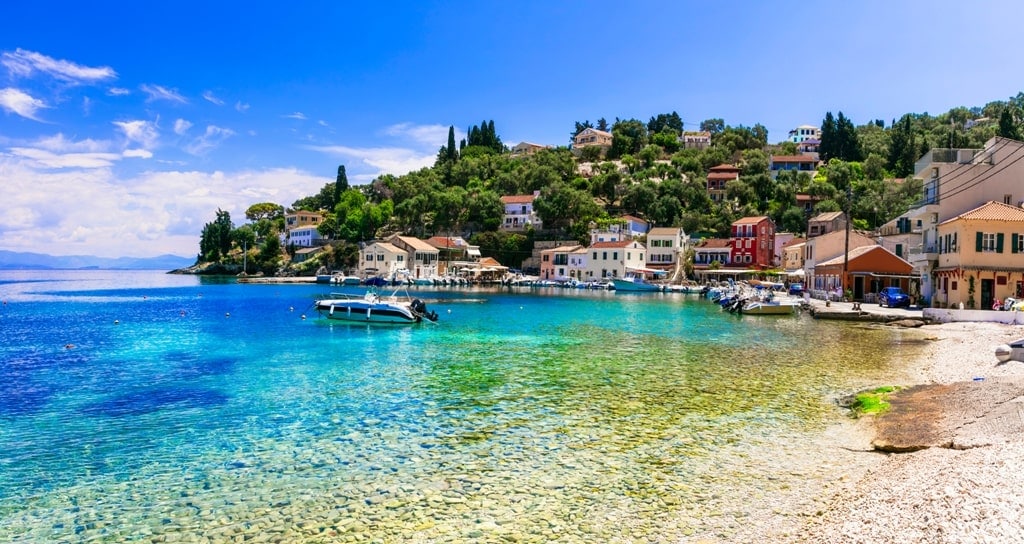 Greece is known for its islands. You’ve probably heard of Crete, Corfu, Santorini, and Rhodes – these are some of the most popular among tourists. However, with more than 6,000 islands making up Greece, some of these are pretty small. And they shouldn’t be overlooked when it comes to travel!

Though they are a little more difficult to get to and visiting requires detailed planning, it’s well worth that extra effort. Small islands in Greece are the ideal way to learn more about each island’s unique and seductive culture. Not only that, there are plenty of hikes, beaches, and tavernas to get acquainted with. Let’s take a look at the best small islands in Greece!

Donousa is only 13 square kilometers in size, so you can walk everywhere here. It’s one of the Cyclades Islands, to the east of Naxos and north of Amorgos. The three villages on the island are connected by a network of hiking trails, restored each spring by volunteers. These will take you to all of the island’s sights, which include a German warship wreck.

Donousa hasn’t been affected by mass tourism, so you’ll have the tombs of ancient archaeological sites like Vathi Limenari pretty much to yourself. Not a history buff? Head to Kedros Bay for some snorkeling instead.

The tranquil island gets a mention in Greek mythology. It’s supposedly where Dionysus hid Ariadne from Theseus. Ariadne would probably have enjoyed it – she could have spent her time sunbathing on secluded beaches and swimming in the emerald green waters.

Anafi is another Cycladic island that has so far remained untouched by mass tourism. The island is peppered with beaches, all of which are within walking distance of the main town Chora Anafi. There’s a laid back vibe and a handful of bars, cafes, and restaurants, where you can, while away an afternoon in the sun. There aren’t a lot of sights, but the rock climbing and hiking here is fabulous.

Anafi’s town may look familiar, as the Anafiotika neighborhood in Athens was built by people from the island who wanted to be reminded of home. It’s a wonderful example of Cycladic architecture!

This charming little island is just 67km from Santorini and can be reached by ferry in about three hours. It’s a wonderful escape from the crowds of the nearby island. Alternatively, you can take a ferry from Piraeus.

Along with Donousa, Schinoussa is one of the four Small Cyclades (the other two are Koufonisia and Iraklia). You won’t find many smaller inhabited islands in the entire country, and Lonely Planet listed them as the best Greek Islands you’ve never heard of.

Arriving on Schinoussa is like stepping back in time. There are only a couple of cafes at the harbor – grab an iced coffee before heading up to the island’s main village, Chora. Its location hidden behind the hill harks back to the days when pirates roamed the waters of the Aegean Sea!

Sample a taverna before heading to one of the island’s 18 beaches.  Schinoussa is worlds away from anything, and there are few better small Greek islands for an escape.

All four of the Small Cyclades are on our radar, and Koufonisia is number three. They have embraced tourism, and you don’t get the secluded and exclusive feel that comes with Schinoussa here. However, it’s still quiet compared with larger Cyclades such as Santorini and Mykonos, and there are only 400 permanent residents.

Koufonisia is not one island but three. However, only one (Pano Koufonisi) is inhabited. Before tourism took over, the main industry here was fishing – the colorful main town, Chora, still retains a fishing village atmosphere.

The two uninhabited islands, Kato Koufonisi and Keros can be visited by a small boat each day. Swimming and snorkeling are popular activities, and if you really want to rough it, you can camp out there. Be aware that Kato Koufonisi is a popular nudist spot.

The last of the Little Cyclades, four of which make for a perfect island-hopping trip close together. There are only two villages on the island where you can admire the traditional Cycladic architecture – we’re talking whitewashed houses, flower gardens, and blue-domed churches.

The islands are mostly untouched, and as well as beautiful beaches, you can relax at natural springs too. It’s possible to visit this peaceful island on a day trip from Naxos if you wish to.

Kastellorizo, billed by some as the last stop in Europe, is easier to reach from Turkey than Greece. That’s because it’s only 2 miles from the Turkish coast! It can be reached in 4 hours by boat from Rhodes or 25 minutes by flight though. And it’s well worth the journey.

Just 12 square kilometers in size, the colorful and pretty harbor is the main base on the island. From here you can head to the 5th century BC Lycian Tomb which is built into a rock face or explore the Aghios Kostantinos and Aghia Eleni churches.

A top attraction is the Kastello Rosso (Red Castle) which the island is named after. Once you’ve seen all of the man-made landmarks, embrace nature by taking a boat trip to the Blue Cave.

Telendos is little more than a mountain rising from the sea. Its small size and location just a 13-minute ferry ride from Kalymnos make it ideal for a day trip. There are no cars and no roads – but why would you need them anyway? It’s easy to walk between the three beaches on the island. It’s trickier to choose which one of the six exquisite tavernas you’re going to visit for lunch or dinner though.

Telendos is popular among rock climbers, but if you’re not into extreme sports, you can while away an afternoon exploring the island’s ruins. Keep your eyes peeled for a Roman town, Christian basilica, and castle.

Lipsi is a popular spot on the ferry routes that connect the Dodecanese islands. Between Patmos and Leros, it’s actually an archipelago made up of twenty small islets. Even though there are so many islets, they only total a length of 8km!

There is only one settlement on the islands, and that’s outnumbered by beaches, which are connected by a series of hiking trails. Stop off at each beach and take a dip in the sea – the warm waters are perfect for swimming and snorkeling. You may even spot dolphins if you’re lucky.

Lipsi is said to be where nymph calypso detained Odysseus’s trip home to his wife Penelope. It wouldn’t be a bad place to get stuck!

Like Lipsi, Fourni is a collection of small islets rather than one large island. Only two are inhabited though – Fournoi and Thyamina. The main industry here has long been beekeeping and fishing, but the islands are slowly embracing a steady increase in tourism.

Surprisingly due to its size, Fournoi is one of the most important fishing centers in the Aegean Sea. Good news for those who like their seafood – the waterfront tavernas are exquisite.

Hiking and snorkeling are two of the most popular activities on the island. You can hike pretty much anywhere, but we’d suggested marking Kamari Beach on your map. From here, you can snorkel and spot the remains of ancient houses!

Gavdos is the most southerly island in Greece. You’ll notice when looking at a map that it’s below Crete! It’s one of the smallest inhabited islands in Greece, and only around 50 people live here year-round, though that number does increase during the high season.

Since Gavdos is quite difficult to get to, a lot of visitors don’t bother making the journey. But don’t be put off! There are very few official listed hotels and accommodation, with camping a popular way to experience a few days. Several beaches are clothing optional too. Gavdos is ideal if you’re looking for an off-the-grid-escape.

Looking for an island escape from Athens or Piraeus? Agistri is a great option as it’s so close by. One of the Saronic Islands, its popularity hasn’t really extended to international travelers – though it won’t be difficult to spot an Athenian on a summer weekend.

The island is covered in a pine forest which provides shade as you chill out and relax on the beach. There isn’t a whole lot more to do than that, but that’s part of the appeal. Swim, snorkel and sunbathe before a delicious meal at a taverna in the villages of Skala or Milos.

If you prefer to be more active, you can rent a scooter and see the entire island in a day!

Paxi, also known as Paxoi, is a small archipelago off the southernmost tip of Corfu. Few international tourists make the journey here, but it’s no secret among Greeks. There are three villages on Paxi named Gaios, Lakka, and Logos.

Of course, Paxi has a lot of beaches where you can lay down your towel and relax. However, there are some cultural sites too including an Olive Museum and a classical music festival at the end of summer.

The largest of the three Diapondia Islands, Othoni is off the northern coast of Corfu. You can get here within 45 minutes by boat. The island is a closely guarded secret, and it’s perfect if you’re looking for a quiet break.

The majority of the approximately 600 inhabitants make their money from fishing and olives. Unpaved roads link the towns on the island, which is home to a Venetian fortress, four Byzantine churches, and an important lighthouse.

Othonoi is another island where Calypso is said to have kept a prisoner – this time Ulysses was the unfortunate captive!

Located to the east of Lefkada, Meganisi is directly opposite the port of Nydri from where you can take the boat.

Choose between spending time on the beach and taking a boat trip to secluded coves where the water is calm and clear.

Outdoor enthusiasts will love Meganisi as there’s no shortage of hiking trails. However, there aren’t a whole lot of sights to see other than the usual churches, beaches, and tavernas. But that’s alright for some!