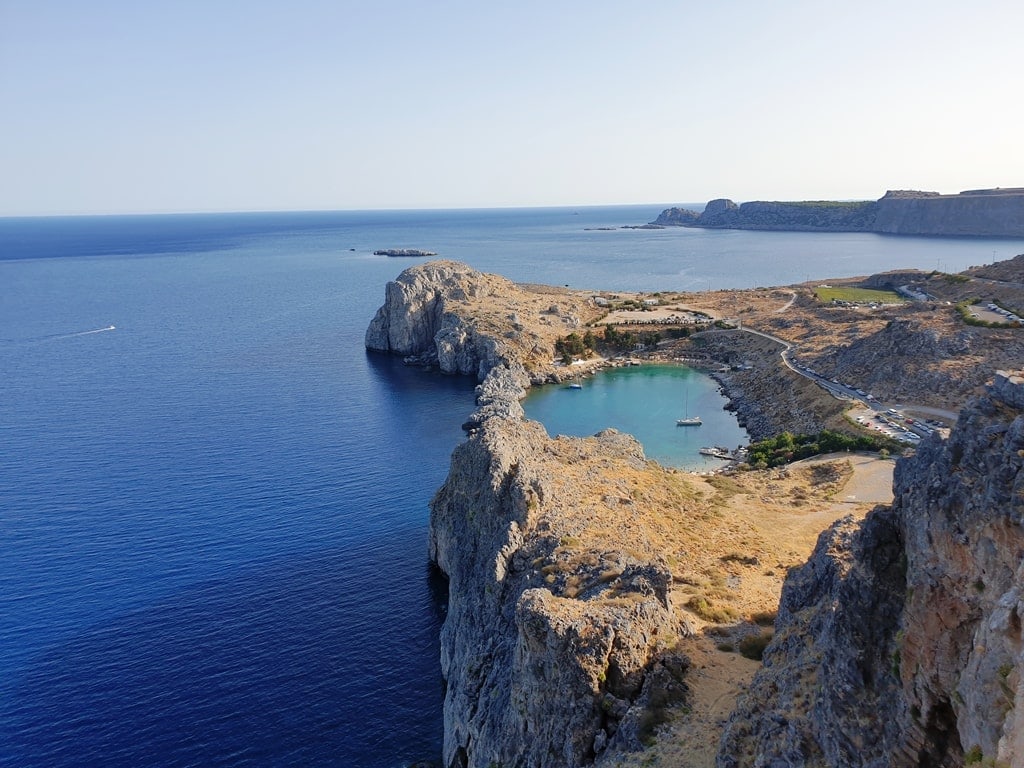 Saint Paul’s Bay is one of the most beautiful beaches in Greece. It is on the south-eastern side of Rhodes islands, next to the charming village of Lindos.

Lindos was the ancient center of the island, and the ancient ruins are still standing close to the village. We read about Lindos in the ancient poem of Homer, the Iliad, written in the 8th century BC.

Today Lindos continues to be a center of culture, and it attracts many visitors who want to enjoy the calm atmosphere of the village.

One of the attractions of Lindos is Saint Paul’s Bay, the beach that has been voted repeatedly among the best beaches in the world. According to tradition, a boat brought Saint Paul to this cove when he came to Rhodes to preach Christianity. Therefore, this beach is called Saint Paul’s Bay.

This article is a complete guide to this charming bay of Rhodes.

The Beautiful Beach of Saint Paul’s Bay in Lindos

As you arrive from the road to the bay, you see one of the most beautiful views. The bay consists of two smaller beaches, surrounded by big rocks. The waters are shallow and crystal clear, and the beach has sand and small pebbles.

The beach consists of two smaller coves with sand, pebbles, and small rocks. The southern cove is busier, and it is organized with parasols and loungers. The northern cove, however, is calmer and quieter. Couples, families, and groups of young people enjoy the beauty of Saint Paul’s Bay daily.

You will see people diving in the water from the huge rock formations surrounding the beach. The water has a turquoise color that one cannot resist.

On one side stands a chapel dedicated to Saint Paul. Many couples choose to get married there as the location is very romantic and the view is perfect for photo shooting.

A beach is an ideal place for diving and snorkeling. The peculiar rock formations at the bottom of the sea are interesting to explore.

Check out: The best beaches in Rhodes.

Now both coves are organized with loungers, parasols, and cabanas, which you can rent for the day. You can also buy drinks and cold snacks from the beach bar which owns the equipment. You can relax, swim, sunbathe, drink your coffee listening to the melodies playing in the speakers. Close to the beach, there are also restrooms and showers.

There is free parking space on the road leading to the beach. You can park your car there and walk to the beach.

There are no restaurants or shops at the beach, but you can find plenty in Lindos, which is a few minutes away. After you enjoy your morning swim, you can have lunch at one of the taverns in Lindos.

A trip to Saint Paul’s Bay could be combined with a visit to the nearby touristic attractions like the village of Lindos.

Lindos is a traditional settlement with picturesque alleys and traditional buildings. Stroll around the village, take pictures, shop from the tourist shops, and talk to locals. After a few minutes, you already feel at home -there is something cozy and hospitable in the air. The village has the typical architecture of Greek islands: white houses with arched doors, and at the center of the village is the imposing church of Panayia.

After a stroll, you can visit the ancient ruins of Lindos. Follow the path that starts from the village, and in 10 minutes, you will be at the archaeological site. Even though nowadays it is just a small village, in ancient times, Lindos was one of the most important settlements in Rhodes, with a long naval tradition. On the site, there are buildings from all historical areas: Greek, Roman, and Byzantine.

You can see the tomb of the ancient Lindian Poet Cleobulus. In the center of the acropolis is the temple of the Greek goddess Athena. The whole acropolis is surrounded by imposing walls that protect the settlement from enemies coming from the sea. At the top, you have a breathtaking view of the sea and Saint Paul’s Bay. The ticket to the archaeological site costs 12 euros (6 euros for children).

Check out: The Acropolis of Lindos.

At Saint Paul’s Bay, the charming chapel of Saint Paul offers a great view of the whole bay, and it is the perfect spot for pictures. This chapel was built to honor Apostle Paul, who arrived with a boat in this little cove 21 centuries ago.

There is no accommodation at the beach, but you have many options at the nearby village, Lindos. There are guest houses and hotels for all budgets, but you have to book your room on time because this area is popular for tourists, and hotels get quickly fully booked.

The benefit of staying in Lindos is that the village is very charming and close to the beach. Moreover, you can drive to the north and south directions of the island without spending too much time in the car, because you are in the middle of Rhodes.

Check out: Where to stay in Rhodes.

How to get to Saint Paul’s Bay, Lindos

Saint Paul’s Bay is about 55 km away from the old town of Rhodes. If you stay there, you can take a day trip to Lindos and the surrounding area.

If you come by car from Rhodes, you need to take Provincial Road 95 and follow the signs to Lindos. After you park your car in the parking area, walk down the alley, and you will arrive at the beach in a few minutes.

I recommend booking a car through Discover Cars where you can compare all rental car agencies’ prices, and you can cancel or modify your booking for free. They also guarantee the best price. Click here for more information and to check the latest prices.

If you do not have a car, you can use the regional bus. It departs from the city of Rhodes every hour, and it takes about 1.43 hours to arrive at Lindos.

From Lindos, you can walk to the Bay. It will take about 10 minutes to arrive at the beach.

Planning a trip to Rhodes, Greece?

Things to do in Rhodes

A Guide to Rhodes Town.

Best Adults only hotels in Rhodes.

Islands near Rhodes to Visit

A Guide to Symi island.

1 thought on “A Guide to St. Pauls Bay in Lindos, Rhodes”