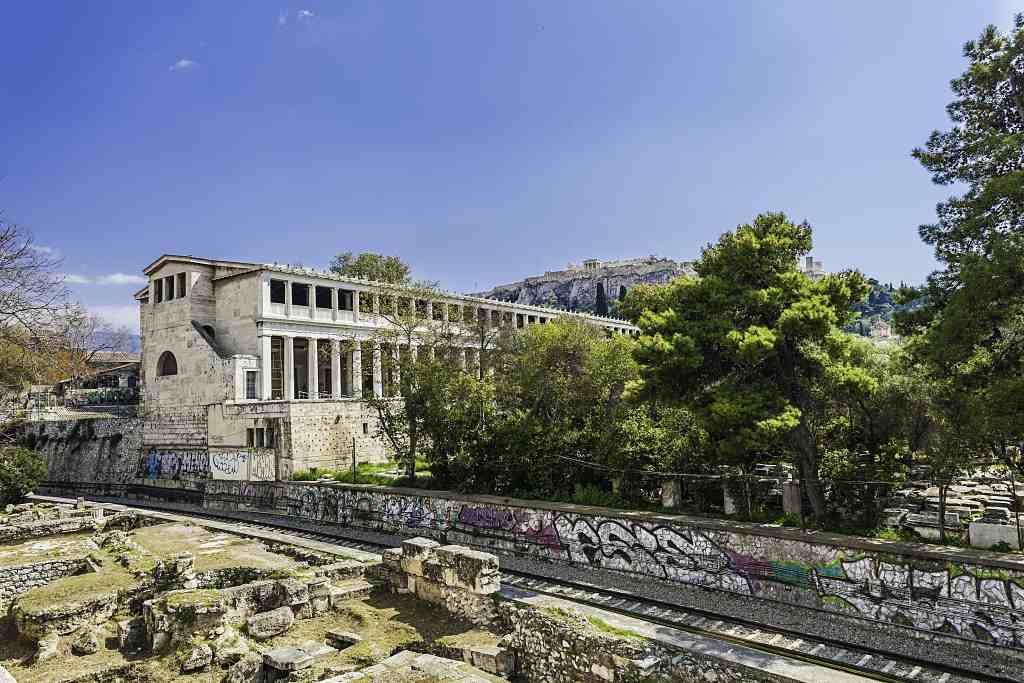 A guide to the Stoa of Attalos

The Stoa of Attalos is an impressive covered walkway that lies within the Ancient Agora (marketplace) archaeological site in Athens. When it was built in about 150BC, the Stoa was one of the largest and most elaborate buildings in Athens. With beautiful marble floors and walls lined with marble columns, it is hard to imagine that its ground floor was the original bustling shopping mall!

There were five Stoas connected to the Agora and the Stoa of Attalos was named after King Attalos II of Pergamon who reigned from 159-138 BC. A second Stoa, the Stoa of Evmenes II, was built by the brother of Attalos, on the southern side of the Acropolis.

King Attalos II gave the Stoa to the people of Athens as a thank you gift for the education he had received in the city. There were a total of five Stoas in Athens and these were built to enclose the Agora.

The Stoa of Attalos measures 115 meters in length and nearly 20 meters in width and is on two floors. The Stoa was open at either end on the ground floor. There was a wall running along the western side on each floor with windows and doors leading to 21 small rooms.

This wall was also decorated with elegant marble columns. The opposite side of the Stoa was open with a series of columns. The first floor did not have such a high ceiling as the ground floor and there was a low wall that ran between the columns on the exterior side.

The Stoa of Attalos was built using marble that was quarried from the Penteli mountains and limestone. Interestingly, the Stoa combined several Greek architectural styles. On the ground floor, the exterior colonnade was Doric and the interior columns were Ionic.

On the first floor, the exterior columns were Ionic, whilst the interior ones were in the Pergamene style. There was a staircase leading to the first floor at each end of the Stoa.

There were 21 shops along the western wall on the ground floor of the Stoa of Attalos and it is thought that these sold everyday items as many of these were found during archaeological excavations. It was a popular place to shop as it had a safe and protective atmosphere. The Stoa remained in frequent use until it was destroyed by the Herulians in AD267 and lay untouched for centuries.

During the 1950s, the Stoa of Attalos was carefully reconstructed in its original design using the original foundations and materials that were found on the site. The Stoa was turned into the Agora Museum by the American School of Classical Studies in the city, with funding provided by the Rockefeller family.

There is an interesting collection of artifacts on display that date from the 7- 5th century BC. As well as sculptures, coins, and pottery, there is an ancient ballot box and a ‘klepsydra’ which was a cleverly designed water clock used for timing public speakers.

On 16 April 2003, the world’s attention focused on the Stoa of Attalos for the ceremony of the signing of the 2003 Treaty of Accession. The treaty was 4,900 pages in length and the longest treaty in the history of the European Union. It was signed by the 15 member countries of the EU and the ten countries that were joining on that day- Cyprus, Czech Republic, Estonia, Hungary, Latvia, Lithuania, Malta, Poland, Slovakia and Slovenia.

Key information for visiting the Stoa of Attalos.