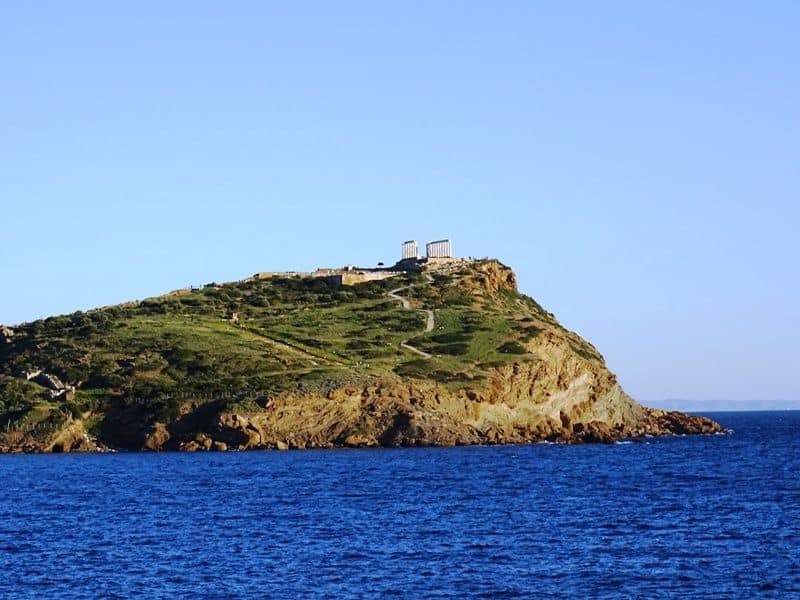 On a sunny Sunday morning of March, I was invited along with the other members of Travel Bloggers Greece to a day trip to Cape Sounion with Exceptional Journey tours.

We all met at the Acropolis Metro station and after settling to our luxurious mini van we headed towards the Athenian Riviera and our first stop, Lake Vouliagmeni. The lake once used to be a cavern that collapsed from an earthquake. It is connected with the sea and it maintains a 24 degrees Celsius temperature year round.  There are many underwater caves in the lake that have never been fully explored.

Lake Vouliagmeni is a perfect place to relax and swim. I regretted the fact that I didn’t bring my swimsuit along even though our guide has told us to. It was a nice sunny warm day of March perfect for a swim. The water of the lake is also therapeutic as it has certain minerals that are good for afflictions of the musculoskeletal system, gynecological and dermatological diseases.

Check out my post: Best things to see in Athens.

Around the lake there are sunbeds and umbrellas along with a cafe and a restaurant. Other amenities include free parking, a playground and dressing rooms with showers.

After having a refreshing drink by the lake we continued our trip making our next stop at the beach of Anavyssos where we relaxed at the beach and watched the view from the picturesque chapel of  St Nicholas.

By then we all felt a little hungry so we headed to a traditional family run taverna nearby called “Ta Pefka”. The owners Yannis and Maria have prepared for us some local delicacies that included Horiatiki salad, fried potatoes and courgettes, courgette balls and fresh fish. We finished our lunch with hand-made loukoumades, a Greek dessert that is like donuts accompanied with honey.

Our wonderful  trip concluded with a visit to Cape Sounio and the temple of Poseidon to watch the sunset! Archaeological finds on the site date back from 700 BC and the temple at his current form was built around 440 BC.

According to mythology, every seven or nine years the Athenians had to send to King Minos in Crete seven men and seven women as a tribune. When they arrived in Crete they were placed into a Labyrinth and were eaten by a creature called Minotaur. Theseus, the son of king Aegeus decided that the creature should be killed and decided to go to Crete.

There he met the daughter of the king, Ariadne and fall in love with her. Ariadne decided to help him by giving him a ball of thread. Theseus entered the labyrinth, killed Minotaur and by using the tread  managed to escape.

On his way back to Athens he forgot to change the colour of his sails to white as he has promised to his father and when Aegeus saw the black sails thought his son was dead and fall of the cliff giving his name to the Aegean Sea.

Watching the sunset from Sounio is a unique experience, unfortunately my photography skills doesn’t allow me to show you the true beauty of the place.

To conclude it was a great day trip that I would recommend to anyone visiting Athens.

For more information you can visit their website here.

I was a guest of Experience Taxi tours but as always opinions are my own.

10 shares
We use cookies to ensure that we give you the best experience on our website. If you continue to use this site we will assume that you are happy with it.Ok