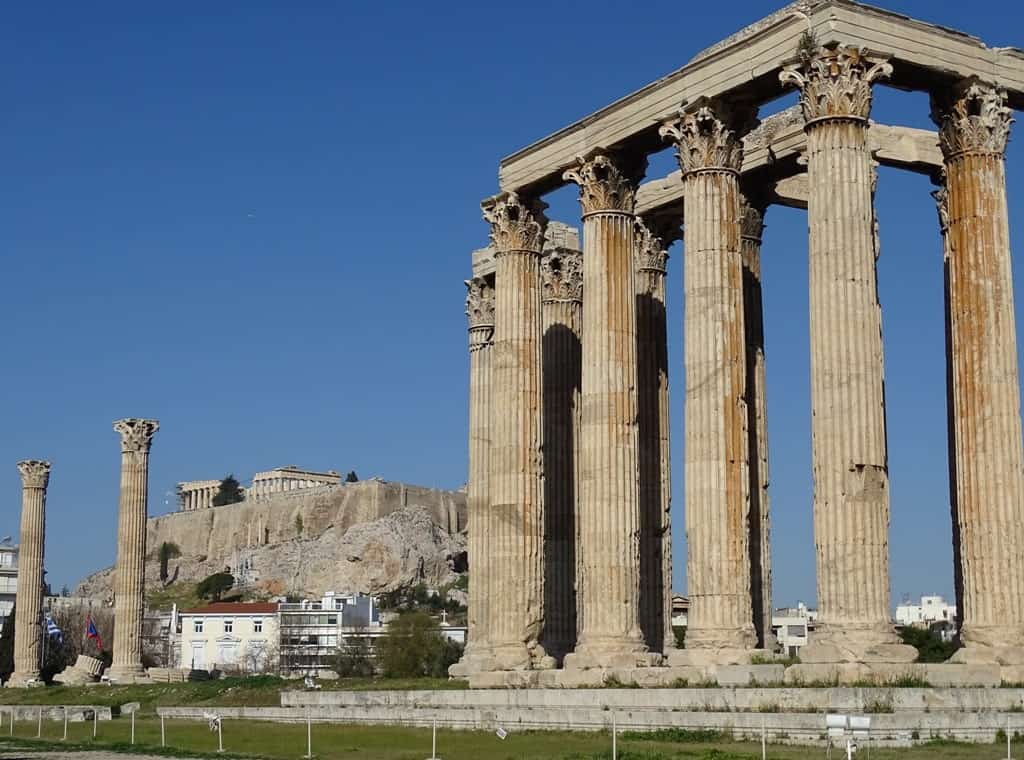 A guide to the Temple of Olympian Zeus

The temple is well worth visiting as it was the largest temple ever built in the ancient world and its sheer size was awe-inspiring. The Temple of Olympian Zeus is situated just south-east of the Acropolis, within easy walking distance of the city center and is certainly one of the most magnificent ancient monuments in Athens.

Built to be one of the greatest

Building this huge temple took seven centuries to complete. Work began during the period of the tyrant Peisistratos in the sixth century BC, with the aim of building the largest temple in Ancient Greece.

Work began on the construction of the new temple on the site of an earlier temple. For various reasons, including lack of funds, the temple was not completed until the second century AD during the reign of the Roman Emperor, Hadrian. The temple had taken 638 years to complete.

Twice the size of the Parthenon

The temple was certainly impressive in size as it measured 96 meters in length and 40 meters wide, with a floor area of 5,000 square meters. The temple was twice the size of the nearby Parthenon and was made using beautiful white marble brought from Mount Pentelicus.

Its original architectural design was Doric, but this later changed to Corinthian. This was the first time that this style had been used to decorate a temple. The architectural features included 104 Corinthian columns– each one standing 15 meters high with a circumference of 1.7 meters.

Each column had an ornately decorated capital, inspired by the acanthus plant. The columns stood closely together in rows along the length of the temple and there were eight columns standing at each narrow end of the temple.

The temple was adorned with statues of the various gods and Roman Emperors. There was a huge gold and ivory statue of Zeus, along with several sizeable statues of Hadrian.

Although the temple was built to worship Zeus, in reality its focus was the worship of Emperor Hadrian.

Enclosed by a large precinct

A large rectangular enclosure was built around the outside of the temple. This precinct had a marble floor and protective wall measuring 688 metres in length and strengthened with100 buttresses.

The precinct was decorated with countless bronze statues of Emperor Hadrian. The impressive entrance to the temple was marked by a propylea measuring 10.5m X 5.4 meters and decorated with four Doric columns.

At the back of the temple (west), a huge statue of Hadrian was erected to face the Acropolis. The statue was a gift to the people of Athens from the Emperor himself and could be clearly seen all over the city.

The temple was only used for a short time and then left untouched. In 267AD, less than 200 years after its completion, the city and temple were sacked during a barbarian invasion. The temple was never repaired and never used.

After the fall of the Roman Empire, much of the marble was taken from the temple to use in other building projects across the city. By the mid-15th century, just 21 of the original columns remained.

The ruins of the temple were further damaged by the earthquake that rocked Athens in October 1852 – one of the remaining marble columns fell to the ground – but surprisingly remained intact and can still be seen today.

The site was excavated between 1889-1896 by Francis Penrose leading a team of Greek and German archaeologists from the British School of Athens. Penrose had played a key role in the restoration of the Parthenon. Today, the temple is an iconic monument in Athens and what can be seen today, clearly shows what a huge and important building the temple was in Ancient Greek times.

Today, 15 of its Corinthian columns majestically remain standing in their original positions, surrounded by grass. They are regarded by many as some of the most important treasures from the Ancient Greek civilisation. The size and grandeur of the columns stands as testament to the beauty of the Temple of Olympian Zeus.

Standing at the north-eastern corner of the temple, is the marvellous 18 metre high marble archway that is known as ‘Hadrian’s Arch’. The archway was constructed in 131 AD in honour of the Roman Emperor and it was built to separate the Old City of Theseus with the new city of Hadrian – known as Hadrianopolis.

Key information for visiting the Temple of Olympian Zeus.