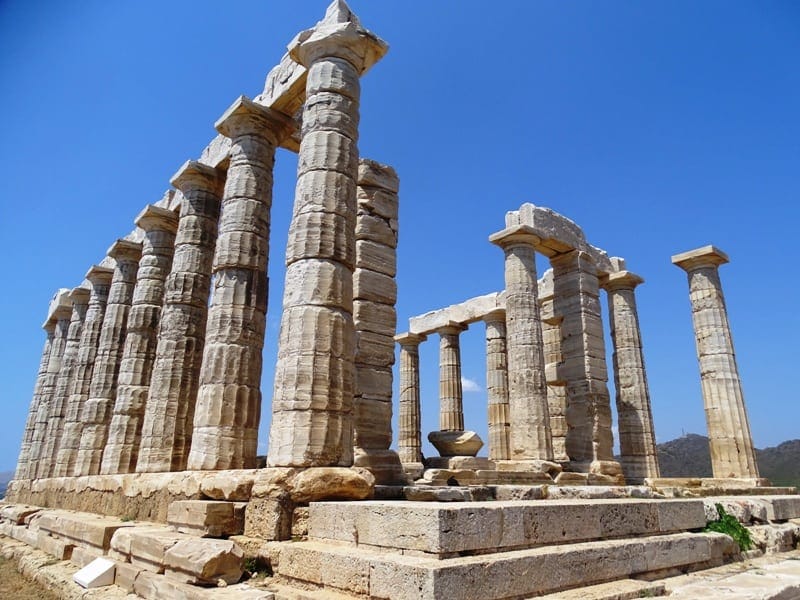 The temple of Poseidon in Cape Sounion makes a perfect day trip from Athens. Sounion is located 69 km southeast of Athens, at the southernmost tip of the Attica peninsula.

You can get to Cape Sounio from Athens either by Ktel ( public bus), by an organized tour, a private taxi or by car. If you want to get by public transport (Ktel) to Sounio you should get the bus from KTEL Attika Buses station located in Pedion Areos. For more info call +30 210 8 80 80 81.  The journey lasts approximately 2 hours and a one-way ticket costs 7€.

If you are looking for guided tours. I suggest the following:

The half-day sunset tour to Sounio lasts around 4 hours and you get to see the temple of Poseidon the best time of the day, during the sunset.

The story behind the Temple of Poseidon

According to mythology, the king of Athens Aegeus leaped to his death of the cliff in Sounio, giving his name to the Aegean sea because he thought that his son Theseus was dead. Every year the Athenians had to send to King Minos in Crete seven men and seven women as a tribune.

They were placed in a Labyrinth and they were eaten by a creature that was half-human, half-bull called Minotaur. That year Theseus volunteered to go to Crete in order to kill  Minotaur. He said to his father that if he won on the way back his ship will have white sails if he was dead it would have black sails. Although he killed Minotaur he forgot to change the color of the sails to white letting his father believe he was dead.

Archaeological finds on the site date back from 700 BC. The latter temple of Poseidon that you can see today was built around 440 BC. As Greece was a country surrounded by sea and with great naval force, Poseidon the god of sea had a high position in the Gods hierarchy.

Cape Sounion’s location was of a great strategical importance thus it was fortified by a big wall and was constantly guarded in order to keep the shipping lanes clear.

Opening Hours & Tickets for the Temple of Poseidon

Once you arrive at the archaeological site there is a cafe-restaurant on-site as well as a souvenir shop. It is better to visit the temple as early as possible during the summer months to avoid the heat. The view from the temple is breathtaking. From Sounio you can also enjoy one of the most incredible sunsets in Greece.

Tickets for the Temple of Poseidon

Free Admission Days for the Temple of Poseidon

Last entry: 20 min before the sunset

During the summer months, after visiting the temple of Poseidon you can relax on the organized beach of Aegeon hotel underneath the temple. The sea has crystal clear waters and is considered one of the best in Attica.

At the edge of the beach, there is a traditional Greek taverna with great seafood if you want to have lunch or dinner.

If you have a couple of days to spend in Athens the Temple of Poseidon in Cape Sounion makes the perfect day excursion. During the summer you can spend the whole day there visiting the Archaeological Site, swimming on the beach and having a meal at a seaside tavern.

If your time is limited, or if you visit from November to April when the sea is cold I recommend a sunset tour,

If you just want to visit the temple of Poseidon I recommend the following sunset tour.

Have you ever been to Sounio?

Does it sound like a good day trip for you?

641 shares
We use cookies to ensure that we give you the best experience on our website. If you continue to use this site we will assume that you are happy with it.Ok