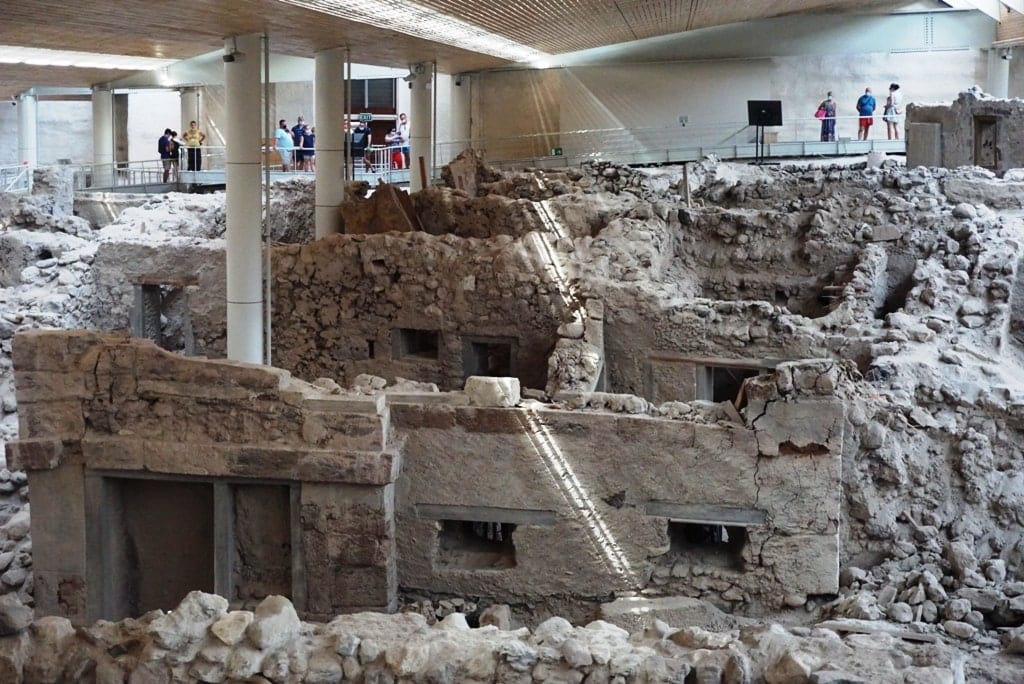 Known as one of the oldest and most important archaeological sites in the Aegean, Akrotiri is an infamous prehistoric settlement whose ruins are located on the island of Thira (modern-day Santorini).

History of the Archaeological Site of Akrotiri

The first habitation at the site dates from the Late Neolithic times (at least the 4th millennium BC), with its prehistory being closely intertwined with the Minoan civilization that flourished on the island of Crete.

As early as the 3rd millennium BC, the so-called Cycladic culture, Akrotiri started to rise in importance and fame due to its important geopolitical and geostrategic location, factors that allowed it to become a wealthy merchant harbor, trading in goods from across mainland Greece, while also maintaining ties with Crete, Cyprus, Syria, and Egypt.

Over time, Akrotiri came to be known as one of the main urban centers and ports of the Aegean, as well as an important point for copper trade in the wider region.

Akrotiri is frequently referred to as the “Greek Pompeii”’ since the site was covered by volcanic ash due to the explosion of the island’s location, around 1600 BC. It is generally accepted that this was the largest volcanic eruption in the last 4,000 years.

However, an important difference is that in Akrotiri no animal or human remains have been found, neither any gold nor other precious metals, leading the archaeologists to believe that the people of the island had enough time to evacuate the city. Nevertheless, it is still unknown where the people migrated to or why they never returned.

As a result of the explosion, the preservation of the settlement is exceptional, marking it as one of the most significant archaeological sites in Greece and a profound source of information about the culture of the period.

The walls of many buildings survive to this day, as well as a significant number of everyday items and frescoes, which are considered masterpieces of Cycladic art. It is worth noting that the settlement has been suggested as a possible inspiration for Plato’s story of Atlantis.

Systematic excavation in the site began in 1967, by Professor Spyridon Marinatos under the auspice of the Archaeological Society at Athens. More specifically, he decided to excavate at Akrotiri hoping that he could verify his old theory, published in the 1930s, that the eruption of the Thira volcano was responsible for the collapse of the Minoan civilization.

According to him, that would explain the presence of pumice in Knossos and the abrupt flooding and eventual destruction of the great civilization. In any case, since his death, the excavations have been continued under the successful direction of Professor Christos Doumas.

The settlement of Akrotiri presents a significant number of notable features. It boasted an elaborate drainage system and sophisticated houses, which were spacious, multistoried, made of stone and mud, with balconies, underfloor heating, as well as hot and cold running water.

All these were characteristic of the Cycladic architecture of the period. Furthermore, the upper stories had large windows and imposing murals, the basements were mostly used as storerooms and workshops, while the houses were surrounded by narrow, stone-paved streets.

As far as the everyday life of the settlers is concerned, we find that the people here mostly cultivated grains such as wheat, barley, legumes, olives, and vines. Other important factors that contributed to the prosperous economy were animal husbandry, fishery, and shipping, while the residents’ occupations as engineers, architects, town planners, builders, and even artists also become clear from the excavations. The residents were also occupied with beekeeping and, especially women, with weaving and saffron collection.

It is worth noting that no palaces were found on-site, like the ones in Minoan Crete, an observation that indicates that the people of Akrotiri fostered a democratic and egalitarian society with no social hierarchies.

However, people here used to project their social status and higher standard of living, as well as their artistic skill and talent, by decorating their houses with rich works of art. The surviving murals constitute masterpieces of Cycladic art but also a valuable source of information about the life of people of that period since they usually depict scenes from everyday life, religious practices, and nature.

The technique used is the fresco, most possibly influenced by the Minoans, where the mural painting is executed upon freshly laid or wet lime plaster. The colors mostly used include white, yellow, red, brown, blue, and black. Overall, the frescoes in Akrotiri are thought to be extremely important for the general study of Minoan art, since they been preserved in a much better state than the ones in Crete.

Pottery was also an extremely developed form of art in the prehistoric settlement, based on the numerous and high-quality vessels that were excavated in the area. These came in all sizes, shapes, and colors, for both domestic and aesthetic use.

Since pottery used to serve a multitude of purposes, it can inform us a great deal about the society of Akrotiri. Many vessels were found that were used for storage, transportation, cooking, and eating, as well as in other diverse activities, such as bathtubs, oil lamps, flowerpots, and more.

Concerning furniture, many negatives of the disintegrated wooden objects were produced, since the volcanic ash which engulfed the city penetrated into every room of the buildings’ in large quantities. Using these negatives as molds, a particular liquid plaster can be poured in order to produce casts of parts, or even entire pieces of furniture, such as beds, tables, and chairs.

Opening Hours for the Archaeological Site of Akrotiri

Tickets for the Archaeological Site of Akrotiri

Planning a trip to Santorini? Check out my other guides:

One day in Santorini

How many days should you stay in Santorini?

A Guide to Oia, Santorini

Santorini on a budget