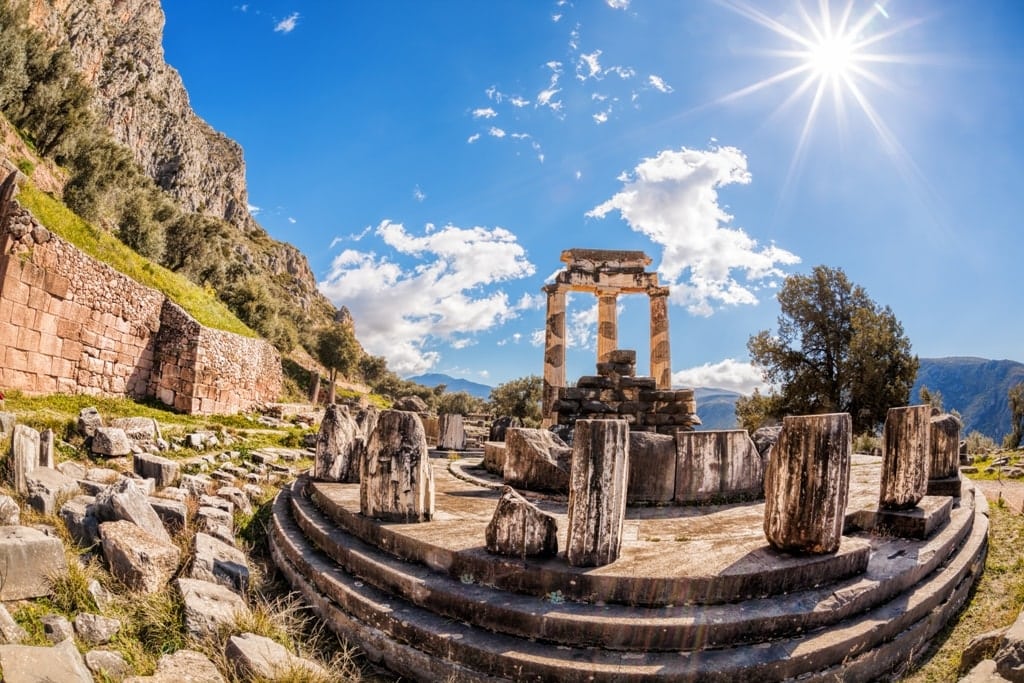 Situated between two enormous rocks on Mount Parnassus, the Pan-Hellenic sanctuary of Delphi was dedicated to Apollo, the god of light, knowledge, and harmony. Evidence of the site’s importance date back to the Mycenaean period (1600-1100 BC).

However, the development of the sanctuary and oracle began during the 8th century, and in the 6th century, their political and religious influence grew significantly over the whole of Greece.

The location was considered by the Greeks to be the navel of the earth: according to myth, Zeus released two eagles from the ends of the world in order to find its center, and the sacred birds met in Delphi.

Today, the site is one of the most important archaeological sites in the country, attracting a high number of visitors every year.

A Guide to Delphi, Greece

Long before Delphi was pronounced the navel of the earth, and according to popular myth, one day Apollo left Mount Olympus in order to destroy Python, a monstrous snake that guarded the sanctuary of goddess Earth.

This myth can be symbolically understood as the elimination of all ancient, primitive instincts by the light of human consciousness and reason. Following the murder, Apollo exiled himself so that he could be purified, to later return to Delphi disguised as a dolphin, leading a ship full of Cretan sailors.

Later on, those sailors built a temple to honor Apollo, becoming his priests. Apollo has thus pronounced the protector of the site, while Zeus cast a massive stone right on the spot where Python was killed.

The influence that the sanctuary of Delphi had throughout the ancient world was immense. The evidence for this are the various offerings of kings, dynasts, city-states, and important historical figures that offered valuable gifts to the sanctuary, with the hope that these would gain the favor of the god.

The sanctuary’s influence even reached as far as Bactria, following the conquests of Alexander in Asia. The looting of Delphi by the Roman emperor Nero and by Constantine and the transportation of spoils from it to Rome and Constantinople had spread even further its artistic influence.

Before making any important political decision, the Greeks used to request for the consultation of the Oracle, while it was customary that no colony was founded around the Mediterranean without the consent of the sanctuary.

For over a millennium Delphi was inextricably tied to the fate of all Greece until the rise of Christianity silenced Pythia forever. In 394 AD, emperor Theodosius I banned every pagan cult and sanctuary in the empire.

The site was briefly excavated for the first time in 1880 by Bernard Haussoullier on behalf of the French School of Athens. Most of the ruins that survive today date from the most intense period of activity at the site in the 6th century BC.

Among them is the temple of Apollo, the theater, the stadium, the sanctuary of Athena Pronaia with the Tholos, the Kastalia spring, and several treasuries. The archaeological museum on-site also contains numerous significant Greek artifacts from the excavations in the area.

Before entering Delphi, one had to wash in the waters of the sacred spring of Castalia, in order to be purified before seeking the oracle. Upon approaching the sanctuary, one can see the temenos of Athena Pronaia, literally meaning Athena before the temple of Apollo.

Inside the boundaries of this sanctuary, the famous tholos of Delphi is situated, a 4th century BC masterpiece of ancient Greek architecture. These kinds of circular structures are also seen in Olympia and Epidaurus, and they were usually dedicated to the cult of heroes or chthonic deities.

Moving up the hill, the Sacred Way led to the monumental temple of Apollo, the most important construction in the area. This was a Doric temple, completed in 330 BC, during the reign of Alexander the Great, and it was the last in a succession of six temples built on the site in honor of Apollo.

Inside the adyton of the temple, a separate closed room at the rear, Pythia, the oracle-priestess of Apollo used to be seated on a tripod. In order to prepare herself for the communion with the god, she firstly took a bath, chewed on bay leaves, and inhaled smoke which was likely produced by burning certain potent hallucinogenic plants along with methane.

She was then able to deliver her prophecies while she was in a state of trance, while the priests would try to interpret her dubious messages. These messages were delivered only during summer, spring and autumn, since it was believed that during winter Apollo immigrated to North Europe, where he spent time with the legendary tribe of the Hyperboreans.

Several treasuries were erected around the main temple, buildings that housed the votive offerings of each city-state to the shrine. The Treasuries of the Siphnians and of the Athenians were the most prominent.

The Siphnian treasury was also the oldest structure in mainland Greece entirely built by marble, and it had a porch supported not by columns but by Korai statues, like the Erechtheion of the Athenian Acropolis. The Athenians built their own treasury after their victory at Marathon in 490 BC against the invading Persian forces.

On the upper part of the hill, the theater of Delphi was erected in 400 BC. Its capacity is estimated to be 5000 spectators and it bears all the typical architectural features of the Late Classical Greek theatres, while music and dramatic competitions of the Pythian Games also used to take place in it.

Above the theater, a path leads to the stadium, where the athletic events of the Pythian Games were held. The stadium acquired its final form during the 5th century BC and was able to hold 7000 spectators.

Finally, the museum of Delphi preserves and exhibits sculptures, statues, and other important artifacts, such as the Charioteer of Delphi, one of the finest bronze statues ever made in Greece.

How to get to the archaeological site of Delphi from Athens

You can easily get to Delphi from Athens by car, bus (ktel), or with a guided tour. The drive to Delphi takes around 2 hours and 15 minutes.

If you choose to go to Delphi by bus (ktel) you can check the timetable here. The journey takes around 3 hours.

Finally, for a piece of mind, you can book a guided trip from Athens.

There are many organized day trips going to Delphi. I recommend this 10 Hour Guided Day Trip to Delphi.

Tickets and Opening Hours for the Archaeological Site of Delphi

Full: €12, Reduced: €6 (it includes entrance to the archaeological site and the museum).