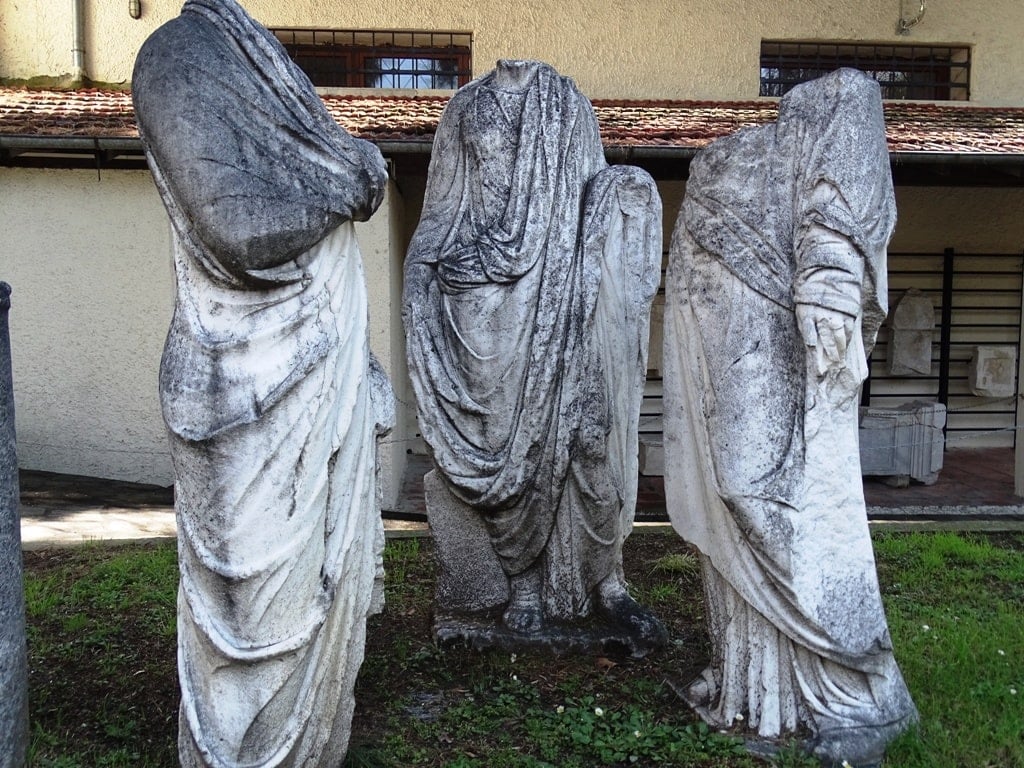 Situated on the foothills of Mount Olympus, where the gods dwelled, and just 5 kilometers from the Pierian shores, the ancient town of Dion was considered by the Macedonians to be one of the most important religious and cultural sites.

Large sanctuaries were founded here during the Hellenistic and Roman periods, in an environment full of lush vegetation, towering trees, and numerous natural springs that enchant every visitor.

Of extraordinary historical importance, the site was rediscovered in 1806 by an English explorer, while excavations have been carried out since the 1920s by the Aristotle University of Thessaloniki.

The Olympian Zeus, the king of the gods, was the main deity worshipped in the site, and so the city owes its name to him since it is a derivation of his Greek name, Dias.

A Guide to Dion, Greece

The town of Dion is known as the sacred city of the Macedonians. Beginning in the 5th century, when the Macedonian state began to gain great power and influence, athletic and theatrical contests and performances took place in the area.

The kings of Macedonia took great care to establish the sanctuary of Zeus as the central place of worship for all Macedonians, and in time, the city grew in size, acquiring a series of monumental buildings at the end of the 4th century BC.

It was here that Phillip II celebrated his glorious victories, and where Alexander gathered together his troops to prepare for his journeys of conquest, worshipping Zeus. Later on, he had 25 bronze statues of the cavaliers fallen in the Battle of the Granicus, erected in the Zeus Olympios Shrine.

The Romans conquered the city in 169 BC, but the sanctuary continued to operate, and the city actually experienced a second golden age during the second and third centuries AD, with even more sanctuaries being constructed.

Check out: A guide to Pieria, Greece.

However, during the Early Christina period, the city began to shrink in size, and it was eventually pillaged by the forces of Alaric, king of the Goths. The natural disasters of the 5th century completed the destruction of the great city, the residents of which had to move to a safer area at the foot of Mount Olympus.

Archaeological excavations have brought to the surface the ruins of several buildings and monuments. The archaeological park itself consists of the city as well as the surrounding sanctuaries, theaters, stadiums, and cemeteries.

The sanctuary of Zeus Ypsistos is the most prominent. Built during the Hellenistic period, the bases of its walls, the nave, the altar, the throne, and a high-quality headless marble statue of Zeus from the 2nd century still survive.

The floor is decorated with mosaics, which retain the image of two ravens. A headless statue of Hera was also unearthed in this area, called the “Goddess of the Wall” because it was found mortared in the walls of the city.

To the east, lie the ruins of a sanctuary dedicated to the Egyptian goddess Isis and Anubis. It was erected in the 2nd century AD on the site of a former fertility sanctuary. The temple and altar of Isis Lochia (Isis as the guardian of the child’s bed) are framed in the western part of the complex by two smaller temples of Isis Tyche and the Aphrodite Hypolympiada.

The sanctuary was built next to natural springs since in the cult of Isis, water was given sacred meaning. Two rooms, which are located in the north of the temple complex, also served as a sanctuary for hypnotherapy,

Many Macedonian tombs were also excavated nearby, dated around the 4th century, and containing several burial objects, such as gold jewelry, golden and silver coins, glass bottles that may have contained perfumes, glass jars, and copper mirrors.

On the northwest lie the ruins of a Hellenistic theater, which replaced a classical theater, in which the premiere of Bacchae of Euripides took place. The theater is still used today, having first been modernized, for the annual “Olympus Festival”.

Another theater was built on the southern outskirts of this sanctuary during the Roman period. The Roman theater was built in the 2nd century BC, it had 24 rows, its stage was decorated with marble and among the exhibits excavated there was a statue of Hermes.

One of the most impressive constructions in the area are the city walls. They were built from the limestone of Mount Olympus between 306 and 304 BC, by the Macedonian king Kassander. It was 2625 meters long, 3 meters thick and 7 to 10 meters high.

Three gates were also found in the southern and northern walls, as well as in the eastern part of the city. Besides that, private houses were also brought to light in various parts of the complex, with the most important one being the Villa of Dionysus, famous for its large and rich floor mosaics.

The ruins of several other buildings were discovered during excavations, such as the thermal baths, the Odeon, the Roman market, the Praetorium, as well as several Christian churches. The Archaeological Museum of Dion also safeguards many treasures found during the excavations.

Among others, it exhibits sculptures from Hellenistic and Roman times, including statues and marble offerings from the sanctuary of the Egyptian gods as well as the altar of Aphrodite.  There are also exhibitions of the discoveries made in the early Christian basilicas, as well as stone objects and coins, pottery, tombstones, bronze figurines, and other small items, which were found in the wider area of Dion.

How to get to Dion archeological site from Thessaloniki

Rent a Car: Enjoy the freedom of making your own itinerary and driving to Dion from Thessaloniki as a day trip or part of a road trip. The journey takes approximately 1 hour 45 minutes on the well-maintained highway with signposts in Greek and English.

Train + Taxi: You can get the train from Thessaloniki to Katerini and then take a taxi to the archeological site of Dion which is 14 km away.

Tickets and Opening Hours to Dion

Full: €8, Reduced: €4 (it includes entrance to the archaeological site and the museum).