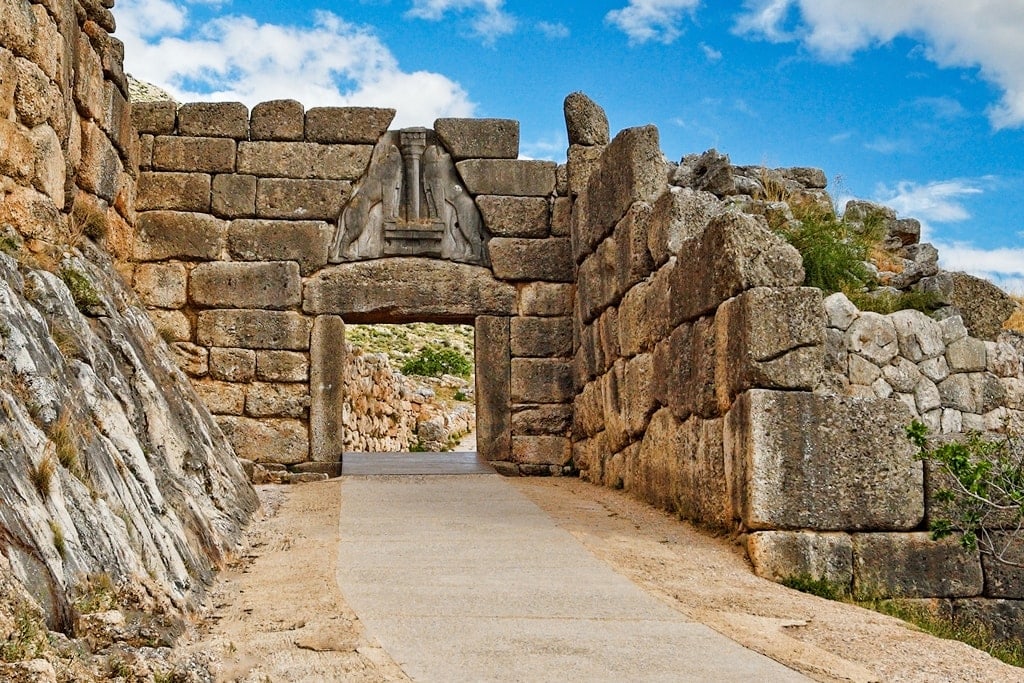 Located on the eastern Peloponnese, about 150 km southeast of Athens, the ancient town of Mycenae is one of the most important historical and archaeological sites in Greece.

The city inspired the epic poet Homer to write his two famous poems, the Iliad and the Odyssey, while it also gave its name to an entire historical period, the Mycenaean civilization, which flourished in Greece from approximately 1600 to 1100 BC, reaching its peak around the 13th century.

The settlement was excavated for the first time by the archaeologist Heinrich Schliemann, who also excavated the cities of Troy and Tyrins, thus gaining the name “the father of Mycenaean Archaeology”.

A Guide to the Archaeological Site of Mycenae

During the second millennium BC, Mycenae was one of the major centers of Greek civilization, and a military stronghold, which dominated much of southern Greece, the Cyclades, and parts of southwest Anatolia.

It is calculated that at its peak in 1250 BC, the citadel and the surrounding town had a population of 30,000 and an area of 32 hectares. Archaeologists mainly base their research on material objects in order to create an agreed historical framework of the civilization.

Mycenae is believed to have become the main center of Aegean civilization in the fifteenth century, effectively ending the period of Minoan hegemony in 1450 BC. A Mycenaean expansion was followed throughout the Aegean, until the 12th century, when the Mycenaean civilization began to decline as well.

The eventual destruction of the city formed part of a wider Bronze Age collapse in the Eastern Mediterranean, since around the 12th century BC all the palace complexes of southern Greece were burned.

The destruction is usually believed to have been caused by natural disasters, but also by sea raiders, known as the mysterious “Sea Peoples’’, who disrupted the trade networks of the periphery, causing chaos in the Aegean. In any case, Mycenae itself was also burned down due to these events in the course of the 12th century.

Based on the numerous material findings excavated in and around Mycenae we can see that the Mycenaean society was a predominantly military one and that the arts were not developed as much.

However, several Mycenaean pots were found in the Mediterranean basin, mainly in southern Italy and Egypt. Apart from these, many other objects of everyday use were discovered on the ancient site, such as ivory carvings, many golden ornaments, bronze weapons, and jewelry.

A famous example of jewelry found in shaft graves is considered the golden mask of Agamemnon, which is believed to be the death mask of the mythical king Agamemnon.

The citadel, or anaktoron, of Mycenae, was constructed on the slopes of a hill overlooking the valley of Argos. Inside the citadel, the remains of several houses, public buildings, storehouses, and cisterns are excavated.

On the top of the town, there is the Acropolis, the highest point of the settlement where the king used to live. The citadel was also protected on all sides by the massive Cyclopean walls, built in three stages (ca.1350, 1250, and 1225 BC), with the exception of one flank where a steep ravine provided natural defense.

These were made of huge stones, which, as legend says, were built by Cyclops. The entrance to the citadel is known as the Lion Gate, as there are two female lions carved on the stone above the gate.

A network of tombs is situated right outside of the citadel, known as “Grave Circle A”, which was formed in a space of ancestor worship, and “Grave Circle B”, containing four tholos tombs, named after their enclosing wall, and several shaft graves, sunk more deeply, with interments resting in costs.

The most famous of them being the tholos tomb known as the “Treasure of Atreus”. This tomb was found already looted in Medieval or Ottoman times, which is why very few objects were found inside upon its excavation. T

The tomb had gigantic lintels and a tall beehive vault, and it was probably built around the 14th century BC. Some broken bones and drinking cups were also found inside the tomb, whose walls were extended around 1200 BC, after large destruction caused by an earthquake.

Many of the valuable items excavated from the site, such as the cup of Nestor, the mask of Agamemnon, and the Silver Siege Rhyton are exhibited in the Archaeological Museum, located next to the citadel.  In 1999, the ancient site of Mycenae had been declared a UNESCO World Heritage Monument.

How to get from Athens to Mycenae

Mycenae is situated 150 kilometers southeast of Athens. If you are arriving at the international airport of Athens, you can rent a car and follow the highway Athens-Tripoli, head to Nafplio and then to Mycenae. Mycenae is a great addition to any Peloponnese road trip. The drive should take you less than an hour and 30 minutes.

You can also get to Mycenae by bus (ktel) click here for the timetable. The public bus stops at the village of Fichti which is 3.5km from the archaeological site. Visitors can take a taxi from the village to the site of Mycenae, the bus journey taking approximately 1 hour 45 minutes each way.

Finally, you can take a guided tour from Athens that combines the visit to Mycenae with the Ancient Theatre of Epidaurus, another UNESCO Heritage Site.

Click here for more information and to book a guided tour.

Full: €12, Reduced: €6 (it includes entrance to the archaeological site and the museum).
November-March: 6 euro April-October: 12 euro.

The combined ticket worth 20 euros is valid for Mycenae (the Archaeological Site, the Museum and the Treasure of Atreus), Tiryns, Asini, Palamidi, Museum of Nafplio and Byzantine Museum of Argos and lasts for 3 days from its issuance.