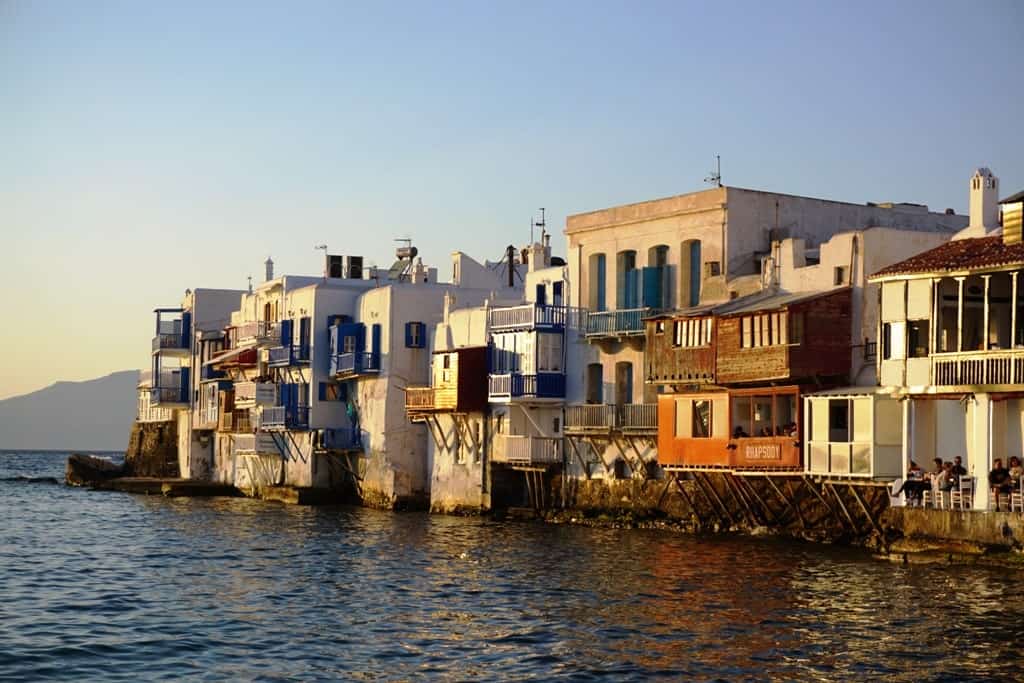 The Greek island of Mykonos is well known for being a cosmopolitan Summer party island but the bustling peak Summer months of June-August aren’t necessarily the best time to visit Mykonos – It all depends on what you seek from a Greek island vacation – Tranquility? Beach parties? Authenticity? Read on to discover the best time to visit Mykonos based on your own needs and interests.

When Is the Best Time to Travel to Mykonos?

For many people, July and August are the best times to visit Mykonos due to the beach parties being in full swing and the weather being at its hottest. Everything is open and there’s a real buzz in the air, especially once the sun goes down.

The island is easily accessible during the high season with multiple ferries and flights each day but accommodation prices are also at their highest. In early September there’s still the buzz of Summer with beach parties continuing for the first two weeks but the crowds have lessened slightly along with the accommodation prices.

If you want to enjoy Mykonos without the crowds and without the beach parties, visit during one of the shoulder seasons. The weather is beautiful without being overbearing (perfect if you like hiking and exploring the picturesque villages) and in September-October, the sea is still beautifully balmy though is still chilly in May.

The evenings can be chilly so a long-sleeved top is recommended but otherwise, during the day, you’ll be fine wearing shorts, T-shirt, and swimwear.

The island closes down to tourism in the low season so this is the time to visit if you want to enjoy a slice of authentic Greek island life. Only a few hotels, tavernas, and shops are open (enough for the locals to get by) with ferries operating less frequently, usually just once a day from Pireas with the possibility of less frequent services during stormy weather and flights also only operate via Athens.

From mid-October, the weather gets progressively cooler and wetter but for those who are used to frost and snow from November onwards, Mykonos can seem like a dream come true with the grey wet days broken up with a few days of sunshine.

In early March the blossom is on the trees and in April the island is covered in beautiful wildflowers with the sun warm enough for some sunbathing but the water is still too chilly for all but the bravest swimmers!

Check out my other Mykonos guides:

How many days do you need in Mykonos?

Mykonos on a budget

Where to stay in Mykonos

One day in Mykonos

Average Temperature and Rainfall for Mykonos

The Best Months Of The Year To Visit Mykonos

By the middle of May, it’s safe to say that Summer has arrived with temperatures averaging 19c (66F) through the sea has yet to warm up with water temperatures of 18.8c (65.8F) meaning a potentially chilly entrance!

All of the hotels, tavernas, shops, and tourist activities are open in May, along with the nightclubs in Mykonos Town and also some of the beach clubs and though there aren’t the crowds of Summer, it isn’t dead making it ideal for couples or solo travelers who want to explore the island and enjoy some relaxation time before the young partygoers arrive.

The sun has more heat behind it now with average daytime temperatures of 23c (73F) and the sea also warming up nicely to 22.2c (72F). The start of June is still relatively relaxed with the island waking up properly from the middle of the month when the beach parties with DJs kick off which brings the first flourish of youngsters to the island who are looking to have some fun in the sun.

Now entering the peak Summer season with the hottest temperatures of the year, the island is a hive of activity with the ferries arriving multiple times a day dispelling both day-trippers from nearby islands and island hoppers along with families and couples looking to enjoy a summer vacation.

The temperature averages 26c (79f) so now is the perfect time to chill by the pool or at the beach (sea temperatures now at 24.2c/75.6F) before hitting the bars and clubs in town or the beach party at night.

The busiest month of them all, Mykonos in August is in full swing with families, couples, and partygoers all enjoying the island. The DJs pump out the tunes at the beach, the hotels are almost fully-booked, and there’s fun and festivity in the air all around as waiters bring out more frappe’s, beer’s, and ice creams!

The average daytime temperature of 25c (77F) is slightly cooler than in July but you should be aware of the strong Northern winds that whip up for a few days at a time as although this breeze helps you sleep at night, it can disrupt the ferries for a couple of days.

As the crowds head back to work or school, the island becomes a little less frantic, especially from the middle of the month when the beach parties come to an end allowing the locals to breathe a sigh of relief that another summer party season is over. Now is the time to enjoy sightseeing, quieter beaches, and a return to Greek tranquillity.

Daytime temperatures average 23c (73f) with the sea still beautifully balmy at 23.8c (74.8F). The strong Northern winds can still play havoc with the smaller ferries but now is generally a much better time to explore the island without whether you go hiking, cycling, or hiring a car.

Families and couples still flock to Mykonos to soak up some last-minute sunshine and swim time (water temperatures now a little cooler at 21.5c (70.7F) until the middle of the month, the daytime temperatures averaging 19C (66F).

As each week goes by it gets quieter as well as cooler (with the chance of rain as the month progresses) with the majority of tourist bars, tavernas, shops, and hotels closed for the Winter from the 3rd week of October though still plenty open in Mykonos Town.

My Favourite Time to Visit Mykonos

Personally, as an Athenian woman who loves the sightseeing, fine-dining, and lazy days on the beach, my favorite time to visit Mykonos is June or September – These ‘goldilocks months’ are just right,  allowing you to enjoy everything the island has to offer but without the madness, heat, and high prices of July-August.

Best Time to Go to Mykonos to Party

July and August are the months to let your hair down and mingle with the cosmopolitan crowd! Tap your toes to the beat as you relax on a sun lounger during the day, then hit the bars, clubs, and beach parties with international DJs at night.

Best Time to Visit Mykonos for Good Weather and Swimming

Anytime between June – September is fine if you want to splash in the water and top up your tan before heading out to explore the town or beach parties at night. July and August are the most popular months for partygoers but are also the most popular months for families enjoying a summer vacation so avoid these months if you want your Summer holiday to be a little quieter!

Best Time to go to Mykonos for Budget Travelers

Fewer people mean cheaper prices on accommodation so budget travelers are best off visiting in May or late September-early October however, the party season doesn’t stretch to the shoulder seasons.

June-September is the best time for Greek island hopping as ferries regularly travel back and forwards from Pireas as well as Naxos, Paros, Santorini, etc making it super easy to get from island to island as well as to/from the airport if you’re starting and ending your trip in Athens.

Parts of Mykonos will seem like a deserted ghost town in the Winter but there’s always enough to get by since the island still has to serve the locals who live here all year. If you want to escape from the world for a while, practice your Greek whilst making new friends, and live quietly and simply as the locals do, Winter is the best time to visit Mykonos.