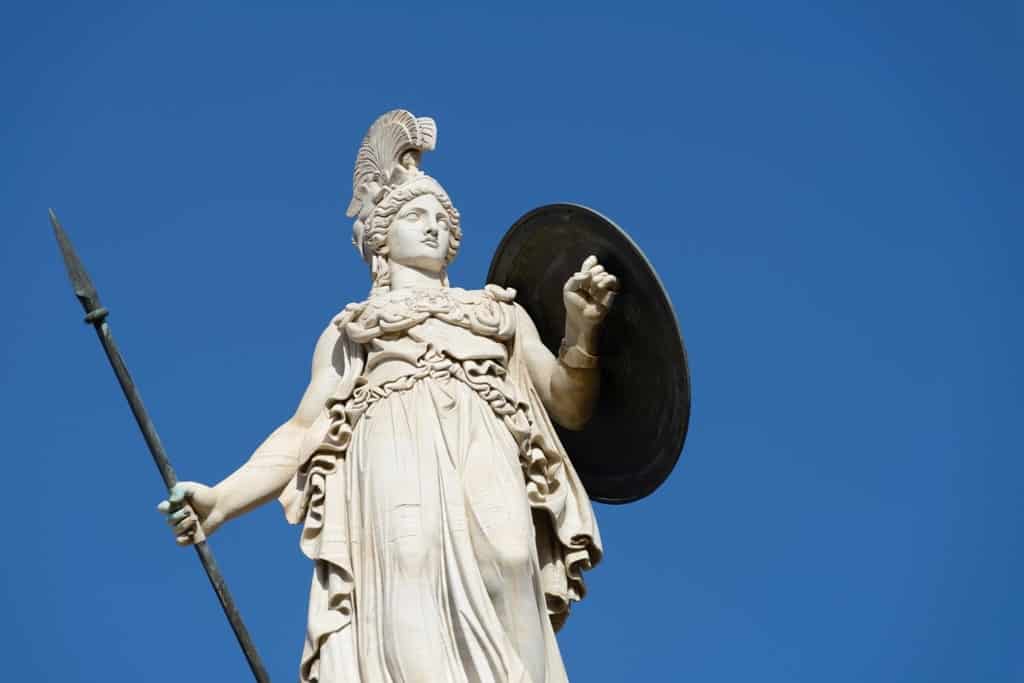 Thus, Zeus fathered several daughters, many of whom were Olympian goddesses themselves, like Artemis and Athena, or lower divine beings, such as the Horai and the Muses. He was also the father of many mortal women who were infamous all over Greece, like Helen of Troy.

Some of the most famous daughters of Zeus were:

Who Were the Daughters of Zeus?

Athena was the child of Zeus and the Titaness Metis, a daughter of Oceanus and Tethys. She was born out of the head of her father, Zeus, who had previously swallowed Metis alive since she had a vision that prophesized that one of his children was going to gain ascendancy over him.

Hephaistos helped Zeus open his head with an ax, and then Athena was thus born, fully shielded. She, then, grew up to be the goddess of wisdom, law, justice, strategy, and the patron goddess of the city of Athens.

Artemis was the daughter of Zeus and Leto, one of the Titanides, and goddess of motherhood and modesty. Zeus had an affair with her, while he was married to Hera, which resulted in the pregnancy of Leto with twins, Artemis and Apollo.

Like Athena and Hestia, she remained chaste forever, and also grew up to be the protector of young girls, the goddess of the hunt and of the Moon.

The Horae and the Moirai

The marriage of Zeus and Themis helped the Olympian to stabilize his power over all gods and humans, after the gods’ victory over the Titans. The union between the two was a prolific one since it led to the birth of six daughters.

The Charites (Graces) were the offspring of the union of Zeus and the Oceanic Titan goddess Eurynome. In Greek mythology, the Charites were associated with charm, nature, fertility, creativity, and beauty.

They were Aglaea, Euphrosyne, and Thalia, and they were frequently associated with the Underworld and the Eleusinian Mysteries. When Hera threw Hephaistus off Mount Olympus for being a cripple, Eurynome and Thetis caught him and raise him as their own child.

Hesiod also states that Aglaea is the youngest of this group and the wife of Hephaestus.

After Zeus slept with Mnemosyne, the goddess of time and memory, for nine consecutive days, the Nine Muses were born: Calliope, Clio, Euterpe, Thalia, Melpomene, Terpsichore, Erato, Polyhymnia, and Urania.

These were the inspirational goddesses of literature, science, and the arts. They were particularly famous for being the patron goddesses of poets who provided them with their extraordinary ability in speech.

Two of the daughters that Hera bore for Zeus were Hebe and Eileithuia. Hebe was considered the goddess of youth or the prime of life. She was also the cupbearer for the gods of Mount Olympus, serving them nectar and ambrosia.

Later on, she married the demigod Heracles. Hebe was the youngest of the gods and responsible for keeping them eternally young and thus was the most revered by them.

Eileithia was the goddess of childbirth and midwifery. She was often depicted as a woman wielding a torch, representing the pains of childbirth.

In Crete, she was also related to the annual birth of the divine child, while her cult was closely connected with Enesiadaon (the earth shaker), a chthonic aspect of the god Poseidon.

Persephone, also known as Kore (maiden), was the daughter of Zeus and Demeter. She grew up to be one of the most beautiful goddesses, and she used to work in nature, planting and ensuring good growth for the flowers and plants.

She, later on, became the queen of the Underworld, after her abduction by Hades and the approval of her father, Zeus. Persephone, along with her mother Demeter, were the central figures of the Eleusinian mysteries, which promised the initiated a blessed afterlife.

Known as the most beautiful woman in Greece and the primary cause of the Trojan War, Helen was the daughter of Zeus, either by Leda or by Nemesis, and the sister of the Dioscuri, Castor and Polydeuces.

She was also the sister of Clytemnestra, the wife of Agamemnon. Many suitors came all over Greece to win the heart of Helen, and among them, she chose Menelaus, king of Sparta and Agamemnon’s younger brother.

While Menelaus was absent, she fled to Troy with Paris, son of the Trojan king Priam, an act that lead to the Greek expedition to capture Troy.

The sons of Zeus

The wives of Zeus