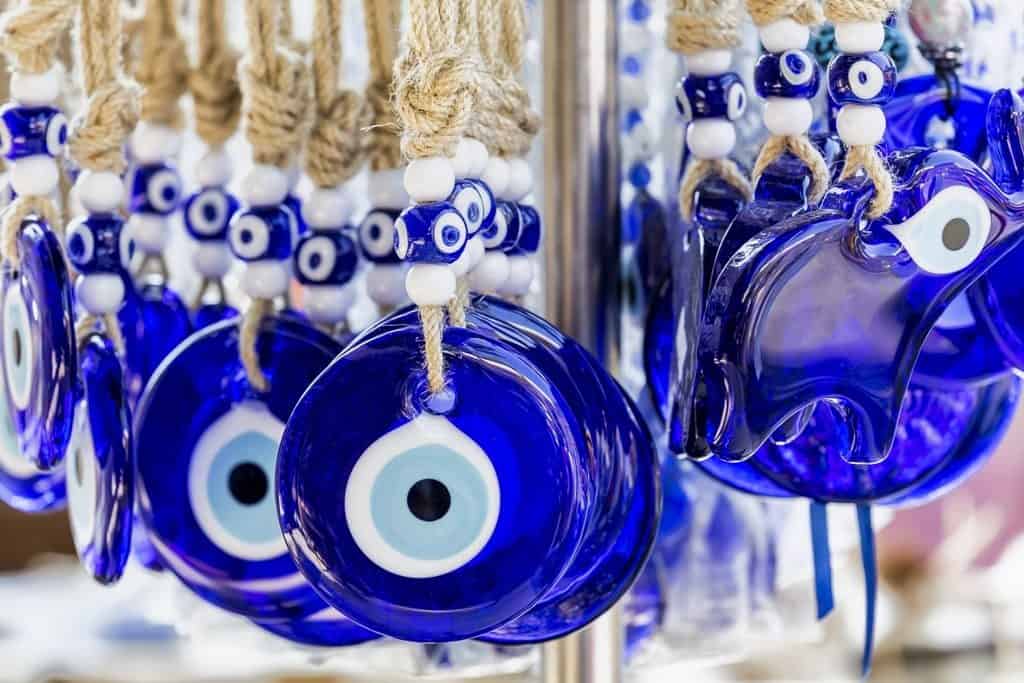 Browsing in the tourist shops you will become aware that there are many talisman and pieces of jewellery on sale depicting a blue eye. The concept of the ‘evil eye’ – kako mati can be traced back to the classical era in Ancient Greece when the Greek civilisation was at its zenith.

The belief remains strong today – not just in Greece, but in countries around the world that have Greek communities.

The curse of the evil eye is cast by a glare with evil intentions – often made subconsciously – which include negative emotions such as anger and jealousy. The curse causes bad things to happen to the person receiving the glare like a sudden bad headache, feeling dizzy and disorientated or experiencing a run of bad luck over the next few days. Women and children are particularly vulnerable.

For example, a friend admires your new hairstyle and suddenly, within a few hours you suffer a terrible headache- it would be said that you had been cursed by the evil eye.. It is said that people with blue eyes frequently cast ‘the evil eye’ and this is why the talisman on sale have blue eyes. To protect against curses, one should wear an evil eye charm – mati-  or a cross and chain – or preferably both!

The first mention of the evil eye was found on clay tablets uncovered in Mesopotamia. The evil eye was a common theme in Ancient Greek literature. It was thought that deadly rays could be emitted from the eyes and these could harm others.

The first charms to protect against the evil eye appeared in the 6th century BC. Belief in the evil eye spread when Alexander the Great took the Greek culture to the east.

The concept of the evil eye does exist in other cultures. In Pakistan, it is referred to as the nazor, and to ward off its effects, people read passages from the Koran. In Islam, the evil eye is said to be the power that some people have to look at people, animals, or objects in a harmful way. In the Jewish culture, many people wear a talisman depicting a hand that defends them against the evil eye.

Today, the belief remains strong in Greece. Many believe that admiring a newborn baby can trigger the curse, so when they have looked at the infant they will spit on the ground making a ‘flou flou’ sound to prevent the evil eye from affecting the baby. For that reason, many protective parents clip a charm of the mati on their baby’s clothing.

Greek brides will often add a touch of blue to what they are wearing or slip a ‘mati’ into their flowers or wear it in their jewelry for protection. People of all ages will wear a mati on a necklace or bracelet and Greek children often wear a blue bead on a cord around their wrist

behind each ear and hanging wild garlic and large glass copies of the evil eye charms on the walls.

There are traditions for casting away the negative effects of the evil eye and these are called xematiasma and vary from region to region.

The person who has been affected by the evil eye knows when the prayers have been successful as they will have a strong desire to yawn several times.

Wandering through the market at Monastiraki there are all sorts of evil eye talismans and jewelry to buy plus mugs and classes. Whether you believe or not in the evil eye, there are beautiful pieces of jewelry and art that make a very special gift or souvenir that is quintessentially Greek.