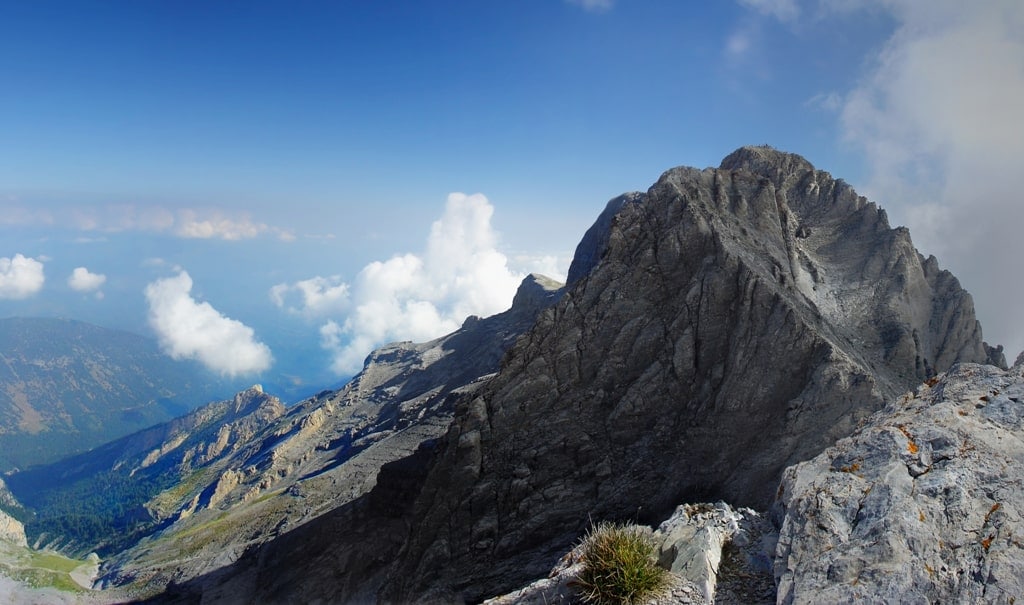 The Mediterranean country of Greece may be the 15th European country in size, and yet it is the third on the list of the mountainous countries of the continent. From the mythical and godly mountain of Olympus to longer mountain ranges and lone peaks, it offers stunning landscapes and great opportunities for hiking adventures.

The mountain-scapes of Greece feature lush pine forests, with alpine vegetation of thick fir trees closer to the peaks in high altitudes. Here is a list of the highest mountains in Greece and how to explore them!

Mount Olympus, known as the place of residence for the Ancient Greek Gods, has Mytikas as its highest peak, also the highest in Greece, looming over the Thessalian land at an altitude of 2,917 meters, imposing and magnificent.

The mountain stands between Macedonia and Thessaly and it is a perfect destination for mountaineers and hiking enthusiasts, eager to explore the legendary home of the Pantheon. It serves as a National Park and a World Biosphere Reserve. Overall, you can find 50 peaks and deep gorges along steep slopes with breathtaking views to

There are countless paths and trails to follow, varying in levels of difficulty, the most used of which starts at the village of Litochoro by the name of E4. It crosses the stunning Enipea Canyon with the Prionia Waterfalls and ends at the refuge of Spilios Agapitos at 2100 meters in altitude. To get to the peak or leave the designated areas, you should consult a local guide.

Tip: The best season to visit Mount Olympus is from June to September, otherwise it is too dangerous as snowfall starts early.

The second highest Mountain of Greece is Mount Smolikas located at the regional unit of Ioannina, in the northwestern part of Greece. The summit stands at 2,637 meters of altitude, the highest of the Pindus Mountain Range.

Smolikas is also home to the breathtaking Dragon Lake at 2,200 meters also called the blue lake thanks to bright blue waters. What makes it all the more unique is the fact that it is heart-shaped! According to the myth, the lake took its name from an actual dragon that found refuge in the lake, who was in a constant fight with another dragon on Mount Tymfi, also residing in Tymfi’s Dragon Lake.

The mountain is perfect for climbing, mountaineering, and hiking as well. There are many trails to follow, but the most well-trodden starts at the village of Agia Paraskevi. It is designated and clearly marked, so no guide is needed. It is also a relatively easy hike to the peak, with views of lush forests and steep cliffs. The trail will take up to 5 hours, and one hour before the summit, you will find the beautiful lake.

The third highest mountain located north of Pella on the borders with the Republic of Macedonia, Kaimaktsalan means “white top” according to the locals, as it’s known for the heavy snowfall.

The highest peak, called Voras Kaimaktsalan, is at 2.524 meters of altitude. There are other peaks including Jenna at 2.182 meters and Pinovo at 2.156 meters. The mountain is perfect for hiking, climbing, and skiing, its ski center being most popular for winter sports enthusiasts. The mountainous area is laden with forests of pine trees, oaks, and other species of rare flora.

Hiking routes usually include the regions of Orma, Pozar, and Pinovo. On the summit of Voras, you can also find the Church of Profitis Elias and a Serbian war memorial. Nearby, you will find small traditional villages such as Agios Athanasios or Karidia, both very picturesque and cozy.

Tip: If you have time, consider visiting the archaeological site of Pella and Ancient Edessa as well.

Situated in West Macedonia, at the borders of Greece and Albania, Gramos mountain has its highest peak at 2.520. It is also part of the northern Pindus Mountain Range, lying between the borders of Kastoria and Ioannina on the Greek side, and Kolonjë on the Albanian side.

The region is scarcely populated, but there are some villages including Gramos and Aetomilitsa at the foothills of the imposing mountain. There is a hiking path from Gramos to Drakolimni Gramou (Gkistova), which lasts approximately 5.8 km and is of mediocre difficulty.

This is another alpine lake and actually the biggest in size in Greece, at an altitude of 2.350 meters. The lake is frozen during the wintertime due to low temperatures. The local legend has it that a dragon used to reside in the village of Grammos but the locals hunted it away, and it shed a small tear creating the small dragon lake, and then further on a bigger, creating the main lake.

In the wider region, you can also visit the Museum dedicated to the Greek Civil War.

In the region of Phocis, in central Greece, the awe-inspiring Mt. Giona stands at 2.510 meters with Pyramida as its highest peak. It is situated between Mt. Parnassus and Mt. Vardousia, with river Mornos and the passage called “51” separating them.

The region is most known for the many gorges, most notably the northern gorge of Reka and the western ravine of Lazorema.In the vicinity, you will also discover the imposing 1000-meters-high Sykia cliff, which is one of the highlights of the destination. This side of the mountain that overlooks the Sykia village is the most unspoiled and preserved. Many species of flora and fauna live there including wild horses, foxes, griffon vultures, and eagles, and even wolves, among a few.

The hiking path that leads to the summit is the Sykia-Lazorema- Vatheia Laka- Pyramida trail, which lasts approximately 5 hours and is recommended for experienced mountaineers only. It starts steep but then gets relatively mild further on, and the path crosses a thick fir forest. The course in the region of Vatheia Laka is flat, and the summit is visible.

Fun Fact: From the summit of Giona, you can marvel at the view of Olympus.

Another mountain of the northern Pindus Mountain Range, Tymfi stands at 2.497 meters at the highest peak called Gamila. It is located in the Ioannina region of Zagori, with the wonderful alpine villages of Zagorochoria, popular for their traditional beauty and architecture.

Protected by Natura 2000, the whole mountain of Tymfi is a valuable natural habitat for many species, also consisting of the Vikos-Aoos Natural Park. In the western part of the mountain, you will find the breathtaking alpine Drakolimni of Tymfi, yet another dragon lake buried in the belly between the peaks. The view from there is out of this world! The dragon lakes of Greece are actually remnants of glaciers, but the myth has it that there was a dragon there fighting with the one in Smolikas Dragon lake, as mentioned earlier.

The most used path to get there begins at the village Mikro Papigko, where you can find various hotels and resorts to stay overnight. The path is approximately 8.4 km and lasts about 3 hours, depending on the pace.

The Vardousia mountain complex is located in the Northwestern part of Phocis and southwestern Phthiotis in Central Greece. The highest peak is Korakas at 2.495m in altitude. All of the peaks, including Korakas, Kokinias, and Skorda Mousinitsas, are beautifully shaped and sharp.

Many spots on the mountain are used for mountaineering and hiking, and there are two refuges available for those purposes, namely EOS Amfissas and POA (Athens Hiking Club).

Although Korakas peak is high, the topology offers itself for hiking paths that all converge to the Korakas peak. The E4 trail crosses the regions of Artotina and Athanasios Diakos, with unforgettable views of mountains and nature. Another frequently used route is the ascend from the Pitimaliko plateau.

In central Greece, Mount Parnassus stretches over the three municipalities of Boeotia, Phocis, and Phthiotis, its parent is also Pindus. The highest peak is named Liakouras and stands at 2,457 meters. At the Northeastern side, Parnassus is connected to Giona.

According to the myth, it took its name from Parnassos, son of a muse, and the mountain was considered home to the Muses, therefore known for poetry, among other arts. As early as 1938, experts established the Parnassus area as a National Park to preserve its rich biodiversity. There are endemic species to the mountain and wildlife that need protection.

The park consists of the wider region of Delphi, an archaeological site of immense cultural value, and the traditional town of Arachova. There, you can find quality amenities including luxurious resorts and a very well-known ski center, equipped and busy during winter months.

Mount Ida or Idi, locally known as Psiloritis (High Mountain in greek) is located on Greece’s largest island, Crete. Located in the region of Rethymno, it overlooks the Aegean Sea in the north and the Libyan Sea in the South. Its highest peak also has the highest topographic prominence in Greece, proudly standing at 2,456 meters. The region is also a natural park protected by UNESCO.

The area includes many caves the most popular of which is Idaean Cave, allegedly the birthplace of God Zeus. The Mt. Idi was dedicated to the Titaness Rea, mother of Zeus and Poseidon, among other Gods according to the Theogony.

The mountain is barren of forest and water, especially above 2.000 meters, so the hiking experience is exhausting during the summer months. There are 4 to 5 hiking routes to explore the mountain, the easiest starting from the Nida plateau at 1.412m. The route may take up to 6 hours to reach the summit on ascend and 2 to 4 during descend, according to the pace.

Tip: The view from the mountaintop is magnificent, and includes the Aegean and the Libyan Sea, as well as Lefka Ori and the villages below. Plan beforehand to ascend the mountain when the weather is clear and no clouds obscure your view.

Lefka Ori, or the White Mountains, is a mountain complex located in the central and western part of Crete, in the region of Chania. The highest summit is Pachnes (2.453m), but there are over 30 summits in the mountain complex surpassing the altitude of 2000 meters.

They are called the white mountains because of the snow on their peaks, which often lasts until late spring. In addition, they are made of limestone, which reflects sunlight and also makes them white in appearance.

There are over 50 gorges, the most visited of which is Samaria Gorge, also a National Park, which takes 5-7 hours to cross and offers majestic views of steep cliffs and virgin nature. Another attraction is the plateau of Omalos, at 1100m. The western central part between the mountains, which is above 1800m is considered a moon landscape and a desert.

The highest mountain in the Peloponnese region is Taygetus, its peak Profitis Ilias looms over the landscape at 2404m. It takes the name from Taygetis, daughter of Atlanta and a celebrated deity in the region.

The peak has a peculiar pyramid shape that has sparked controversy and mystery over the centuries. It has also been mentioned by Homer in the Odyssey. It is said that when the sun rises, and the weather permits, the mountain’s shadow creates a perfect triangle that projects on the waters of the Messinian Gulf.

The route to Profitis Ilias lasts for about 3 hours, so it is relatively short and does not require an overnight stay, although a refuge is available for that purpose. It is also part of the long E4 trail, which also crosses the Menalon Trail. There are countless routes of various difficulties to follow.