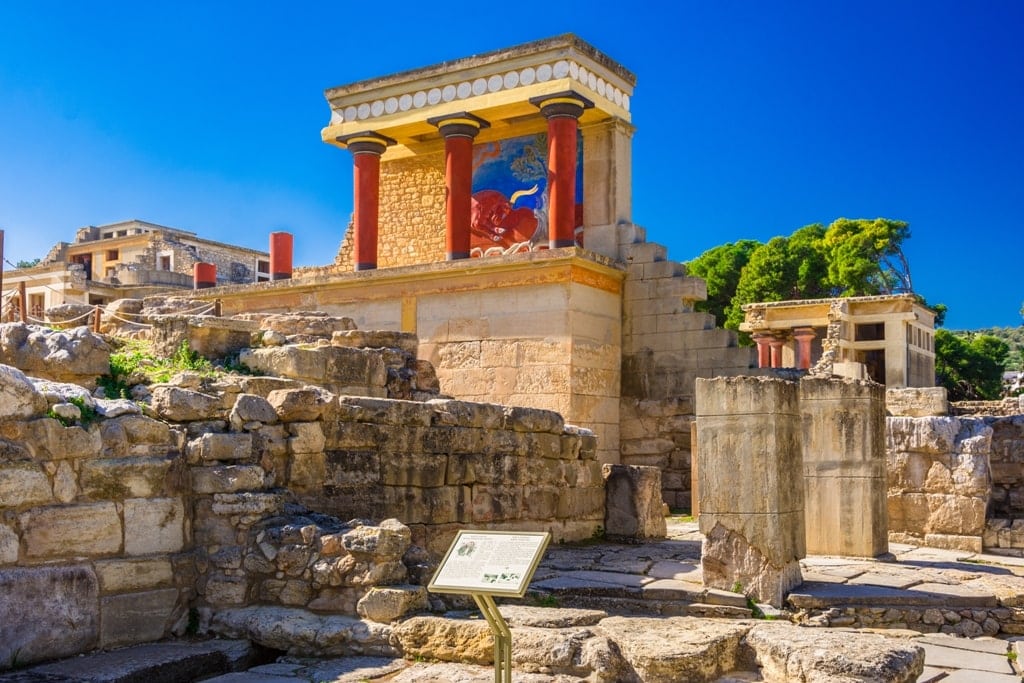 Crete is Greece’s biggest island and one of the most beautiful. Its fertile land and favorable climate have encouraged people to inhabit it since the beginning of time. That’s why there are several unique archaeological sites in Crete from all times of Greek history. Of them all, the most impressive is by far the Palace of Knossos.

Closely intertwined with the legend of the labyrinth and the Minotaur, the mythic king Minos, and a civilization lost in time until recently, the Palace of Knossos still stands proudly in vivid colors. If you are in Crete, you must visit this magnificent place. Here is everything you need to know to make the most of your visit and enjoy the time capsule that is Knossos to the fullest.

Disclaimer: This post contains affiliate links. This means that if you click on certain links and subsequently purchase a product, I will receive a small commission.

Where is the Palace of Knossos?

The Palace of Knossos is roughly 5 km south of the city of Herakleion, which makes it a roughly 15 to 20-minute drive.

You can get there by car, taxi, or bus. If you choose to go by bus, you must take the bus service from Herakleion dedicated to Knossos. These buses are frequent (up to 5 every hour!), so you don’t need to worry about booking your seat or being there at a specific time.

You should prepare for exploration before you go to the site! Consider that the sun is relentless in Knossos as in all of Greece, and arm yourself with a good sunhat, sunglasses, and a lot of sunscreens. Prefer comfortable walking shoes.

The ticket to the site of the Palace of Knossos is 15 euros. The reduced ticket is 8 euros. You can get a bundled ticket for just 16 euros if you plan to visit the Archeological Museum.

People belonging to these categories can also get free admission.

There are free admission days on these dates:

Tip: The queue to buy your tickets for the site is always big, so I recommend booking a Skip-the-Line Guided Walking Tour in advance or buying a skip-the-line ticket with an audio tour.

The mythology of Knossos

According to ancient Greek myth, the Palace of Knossos was the center of the powerful kingdom of Crete. Its ruler was the renowned king Minos, with his queen Pacifae. Minos was a favorite of the god of the sea, Poseidon, so he prayed to him, asking for a white bull to sacrifice to him as a sign of this.

Poseidon sent him an immaculate, gorgeous snowy bull. However, when Minos saw it, he decided he wanted to keep it rather than sacrificing it. So he tried to sacrifice a different white bull to Poseidon, hoping he wouldn’t notice it.

Poseidon, however, did, and he was very angry. To punish Minos, he cursed his wife Pacifae to fall in love with the white bull. Pacifae was so desperate to be with the bull that she commissioned Daedalus, the famous inventor, to make a cow’s costume so she could entice it. From that union, there was born the Minotaur.

The Minotaur was a monster with a man’s body and a bull’s head. He devoured humans as his sustenance and became a menace as he grew to a gigantic size. That’s when Minos had Daedalus build the famous labyrinth underneath the Palace of Knossos.

Minos shut the Minotaur there, and to feed him, he forced the city of Athens to send 7 maidens and 7 young men to enter the labyrinth and be eaten by the monster. Entering the labyrinth was equal to death because it was a huge maze from which nobody could find the exit, even if they escaped the Minotaur, which they didn’t.

Eventually, the hero of Athens, Theseus, came along with the other youth of Athens as a tribute and slew the Minotaur. With the help of Minos’ daughter Ariadne, who fell in love with him, he also found the way out of the labyrinth.

The labyrinth is associated with the Palace of Knossos because of its architectural complexity. There are so many wards, underground rooms, and chambers that it resembles a maze, which is believed to give rise to the labyrinth myth.

In fact, about 1300 rooms are interconnected with corridors, so that definitely qualifies as a labyrinth! The strong symbolism of bulls is an allusion to the Minoan civilization’s religion, where bulls were prominent and sacred.

It is also believed that the relationship between Crete and Athens represents the clash of two different civilizations, the Minoan and the Mycenean, and possible strife over trade routes and influence over various islands.

The history of Knossos

The Palace of Knossos was built in the Bronze Age by the Bronze Age pre-hellenic civilization known as the Minoans. They got this name from Arthur Evans, who, when the palace was first discovered a little more than a century ago, was certain he had found the palace of king Minos. We don’t yet know how these people named themselves because we haven’t yet managed to decipher their script, Linear A.

What we know is that the palace was more than just a palace. It was the center of the capital city of these people and was used as an administrative center as much as it was used as a palace for a king. It was also used for several centuries and underwent many additions, reconstructions, and repairs from various disasters.

It is estimated that the palace was first constructed around 1950 BCE. It suffered major destruction in 1600 BCE when the volcano of Thera (Santorini) erupted and caused a tsunami that hit the coast of Crete. These were repaired, and the palace stood until around 1450 BCE, when the coast of Crete was invaded by the Myceneans, a proto-hellenic civilization, and was finally destroyed and abandoned by 1300 BCE.

The palace of Knossos is incredible because it is surprisingly modern in its approach and construction: not only are there storied buildings, but there are three distinct in-built water systems: Knossos had running water, sewage, and rainwater drainage. Knossos had working flushing toilets and showers several millennia before the 17th century when they became relatively widespread.

What to see in the Palace of Knossos

Consider that you need at least 3 or 4 hours to thoroughly explore the Palace of Knossos and see everything that is available. It can also get quite crowded, so it’s in your interest to go early or late. It will also help with the sun!

The areas you should absolutely make sure to see are the following:

The Central Court: There is an impressive, wide main area in the center of the palace, which features two floors. One from the Neolithic era and one applied over it at a later time. There is a theory that the mysterious bull-leaping ceremony took place in this area, though it probably wasn’t large enough for the acrobatics involved.

The west Court: This area is thought to have been a commons of some sort, where people would gather in crowds. There are also storage rooms with giant pits that must have been used for food or silos.

The Piano Nobile: This area was an addition built by Arthur Evans, who attempted to renovate the palace to his image of what it must have looked like. Archeologists now think it’s completely out of place, but it offers a great impression of the sheer size and scope of the area. It is great for photos!

The Royal Rooms are some of the best areas to visit in the palace, so make sure to include them in your itinerary.

The Throne Room: This is one of the most iconic rooms in the entire palace. With vibrant frescoes and an abstracted yet ornate stone seat flanked by a continuous stone bench, this room was opulent. It was likely a lot more than a simple throne room. It must have been used for religious ceremonies, as implied by a stone basin not connected to the water systems in place.

A wide open space that looks to be an amphitheater remains a mystery for archaeologists because it is too small for theater function but still looks like it was an area for gatherings of specific roles of some sort.

These are areas where potters, artisans, and other craftsmen would work to create various items for the palace’s use. Here you can see huge vases called “pithoi” and get a good view of the famous bull fresco.

Look at the various terracotta pipes and drains designed to keep the palace from flooding during heavy rains! The system is a wonder even for modern plumbing.

Tip: The queue to buy your tickets for the site is always big, so I recommend booking a Skip-the-Line Guided Walking Tour in advance or buying a skip-the-line ticket with an audio tour.

Visit the Archaeological Museum of Crete

Make it a point to visit the Archaeological Museum of Crete, one of the most important museums in Europe. There you will see all the exhibits excavated from the Palace of Knossos, from the authentic frescoes to beautiful statuettes of snake goddesses, to the famous Disc of Phaistos, and countless more artifacts spanning five millennia of Cretan history.

Visiting the museum is a necessary complement to exploring the Palace, with more insights into everyday life in Knossos.

Best things to do in Crete

Things to do in Heraklion, Crete

Things to do in Rethymnon, Crete

Things to do in Chania, Crete

Where to stay in Crete