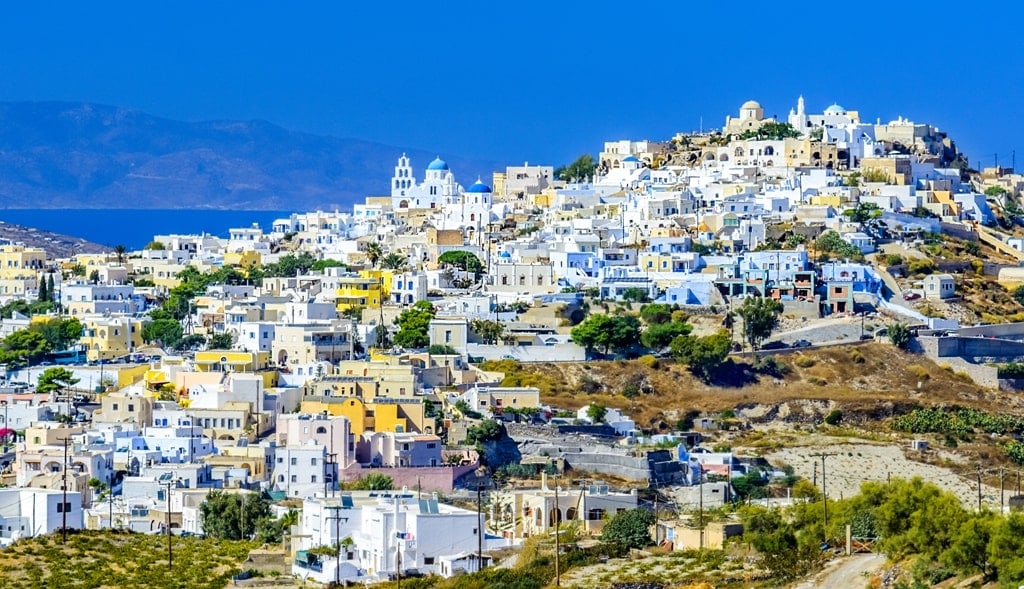 The gorgeous island of Santorini (Thera) doesn’t really need much introduction. It is one of the stars of the Cyclades, a Greek island so popular around the world that its image is often what people imagine when talking about Greek islands or vacations in Greece.

Santorini is a touch of Mediterranean paradise, with such beautiful places that it’s sometimes hard to believe it is a real island at all and not an ad setting: with its iconic sugar cube houses and blue-domed churches, with its varied and breathtaking beaches, with its sweeping bird’s-eye views that you can enjoy from the ledges of its villages, and the bizarre and otherworldly volcanic terrain, Santorini makes for unforgettable experiences.

What’s also quite surprising about Santorini is that while it is a relatively small island, it’s full of villages with diverse character. Each one is unique despite the picturesque Cycladic style that is so iconic. In each one there are things to do and places to see that can’t be found anywhere else.

While there are several villages all over Santorini that you should explore at your leisure, here are the most important ones if you are in a hurry or looking to create a shortlist:

Planning a trip to Santorini? Check out my Santorini guides:

How to spend 1 day in Santorini.

Santorini on a budget.

How many days do you need in Santorini?

The best islands near Santorini.

9 Beautiful Villages to Visit in Santorini

Fira is Santorini’s Chora, which means it is its main town or capital. This is the first town you will see as you arrive by ferry. It is located right at the caldera, opposite the volcano and it is the place of several high-end bars, restaurants, shops, and venues. Fira is quite picturesque and extremely cosmopolitan.

Within its whitewashed, traditional walls, there is a sample of the global market when it comes to luxury items and services. In its commercial streets, you will be able to shop for the latest fashions in jewelry, clothes, and accessories from famous international designers alongside the Greek ones. You will also be able to enjoy international cuisine, fine dining Mediterranean and Greek cuisine, and even fusion of ethnic dishes in Fira’s various restaurants and bistros.

Fira is also the hub of Santorini’s nightlife, with excellent summer clubs and venues. There are a lot of options for all budgets if you’re looking to pamper yourself while overlooking some of the most beautiful vistas in the world.

In Fira, you will also find two very noteworthy museums, the Museum of Prehistoric Thera which showcases amazing artifacts and findings from the site of Akrotiri, and the Archaeological Museum where artifacts from the Archaic to the Hellenistic and Roman periods of the island are showcased. Don’t miss out on seeing its impressive pottery collection from all those eras.

Check out my guide, things to do in Fira, Santorini.

At the northern tip of the island, at the slopes of the caldera, you will find the village of Oia (pronounced EE-ah). Oia is breathtakingly gorgeous, full of little winding paths of paved stone for you to discover while you explore it, blindingly white with splashes of intense color in the shutters, the doors, and the bougainvilleas.

The entire village of Oia is considered a historical monument, and those paths leading to the various nooks and crannies with the amazing view were of the first to be listed as historical monuments by the Greek Tourism Association.

Oia was originally a village of captains, sailors, and merchants. Its position granted the grandiose captain’s mansions a full visual control of the port as well as the sea connecting the various Cycladic islands around. Nowadays, these beautiful 18th and 19th-century houses serve as the venues for some of the best fine dining restaurants in Greece.

In the village of Oia, you will enjoy one of Santorini’s most famous assets: its glorious sunsets. One of the most popular spots to enjoy the sunset from is the ruins of the Byzantine castle which loom right over Oia’s houses. Just be warned that during high season you might need to cram and queue to do so!

If you feel like a swim, go down the 300 steps from Oia to the port of Ammoudi for a soothing and relaxing time at the seaside and tasty meals at its fish tavernas. Don’t worry about the way back- if you’re not feeling up to climbing the steps up, there is a taxi service to get you back without effort.

Check out my post, things to do in Oia, Santorini.

At the very top of the caldera is where you will find the village of Imerovigli. Its name literally means “day watch” and it boasts the best views of the caldera and Nea Kameni, the little black island created out of a volcanic eruption in medieval times.

Imerovigli is a quiet village with some of the best boutique hotels you can find, most of them located in the caves underneath it. In Imerovigli, you can enjoy wonderful sunsets just like in Oia and relax in the quiet atmosphere surrounding you.

Make sure to visit the oldest castle ruins of Santorini, Skaros Castelli. This medieval castle is almost completely gone but the remaining traces of it are considered an important island landmark. The view is inspiring as well, as is the hike there.

Don’t neglect to visit the churches either! Panagia Malteza Church has wonderful wood carvings for you to enjoy and Panagia Theoskepasti Church is lauded as the best place from where to enjoy the sunsets in Imerovigli, as you can see all of the Aegean.

Firostefani is a tranquil village between Imerovigli and Fira. It is perched on the edge of terrifyingly steep cliffs at the edge of the caldera and has a characteristic balcony hanging over the cliffs and shaded by trees. There is a 17th-century monastery, the Monastery of Aghios Nikolaos that is not open to the public but offers an excellent setting for photos with its blue-domed church.

Firostefani is a great waystation between Fira and Imerovigli since it has that cool, thick shade and offers its own unique and amazing views while you rest. It also has a remarkable underground complex of tunnels where art is housed. Make sure you visit the unique art gallery that is the Nomikos Conference Center and enjoy the shielding from the sun and the heat as you peruse the artwork.

Its name means “big village” and it is one of the most beautiful villages in Santorini- and that says a lot as they are all gorgeous! Situated further inland than the caldera cliffs, Megalochori has been another affluent village of merchants and landowners. This is evident in its iconic neoclassical and old traditional mansions, the characteristic vineyards, and the hiding places to defend fortunes from pirates.

Unlike the sugar-cube houses of the other villages, in Megalochori there are tall gates for high walls, inner courtyards, and forbidding but beautiful wooden doors that defended the houses from the pirates.

Make sure you visit the Megalochori square for good food and excellent wine. Roam the streets and paved paths of the village to look at its 17th-century grandeur including the impressive bell tower of the church. Walk to Plaka beach or Thermi beach for unique and isolated experiences swimming. Thermi beach has black pebbles, geothermal springs, and red volcanic rocks! Plaka beach also has similar seaside elements but also a beautiful path to it which you have to walk on to appreciate.

At the highest point of Santorini, there is the village of Pyrgos which is a protected settlement and has been since 1995. Pyrgos’ name means “tower” and it is quite fitting, as it is an iconic Cycladic castle settlement. The actual castle was a fortress, called “Kastelli” and its ruins are at the very top of Pyrgos. You will find a commemorative plaque for those fallen in WWII and again some of the best views of the island.

There are also beautiful neoclassical houses to admire near the traditional whitewashed sugar cube ones, historical pathways, and churches, beautiful vineyards, and some of the most charming settings to enjoy in all of Santorini, merging the romance of older times with the luxury of modernity.

If you happen to be in Santorini during Easter, you can’t miss the magical way in which Good Friday is celebrated in Pyrgos, with candlelit lamps from the top of the castle and on every ledge in the village.

Renowned for its archeological significance, Akrotiri’s village has even more to offer. It is located at the southwest coast of Santorini and has preserved its quiet, traditional, relaxed, and authentic atmosphere despite the waves of tourists that swath the island every summer. In Akrotiri, you will find quiet non-organized beaches, tiny iconic churches, amazingly good food in traditional tavernas, and astounding history.

Akrotiri was a fortified village, and so you can enjoy Akrotiri castle, built by the Venetians in the 13th century. Akrotiri castle was quite well preserved until the devastating 1956 earthquake but you can still enjoy its tower, La Ponta, which has been properly restored. Within the tower, there are exhibitions and workshops about folk instruments such as the tsabouna, a wind instrument.

Don’t miss out on visiting Akrotiri’s Lighthouse, one of the best in Greece and of the most beautiful. It was built by a French company in the late 19th century, during Ottoman rule. Then there is Balos Cove which is a little hard to get to, but worth seeing it from above if you take the route from the cave chapel of Panagia of Balos.

Emporio village is yet another fortified village with a unique character. Walk in its various pathways and admire the high walls and strong medieval feel everywhere you go. Emporio means “commerce” and since the 17th century, Emporio was one of the hubs of the island’s economy. It is located at the center of the island and is one of the biggest villages of Santorini.

Enjoy the impressive belltowers scattered through the village and the way the houses are built side by side for extra fortification from the pirates. Emporio’s castle is the Tower of Nimporio or “Goulas”, built sometime in the 15th century.

Perissa is a seaside village boasting black sand beaches, for which it is most known. Enjoy the unique feel of lounging on black sand and pamper yourself with the service and luxuries available but at a more affordable price than other nearby villages! Though, if you’re looking for high-octane nightlife nearby, you should definitely check out Perivolos village right next door.

In Perissa you will have the chance to visit one of the largest churches on the island, the Church of the Holy Cross (Timiou Stavrou) which was built in the 19th century. You can also see a much older church, built in the 5th century, the church of Aghia Irini (St. Irene) from which Santorini gets its name. Nearby at Mesa Vouno, you will also see the archaeological site of Ancient Thera.

Perissa has the capacity for organized camping and features a range of restaurants and tavernas for all budgets. Keep an eye out for the various “summer happenings” that often take place in Perissa and its beaches!