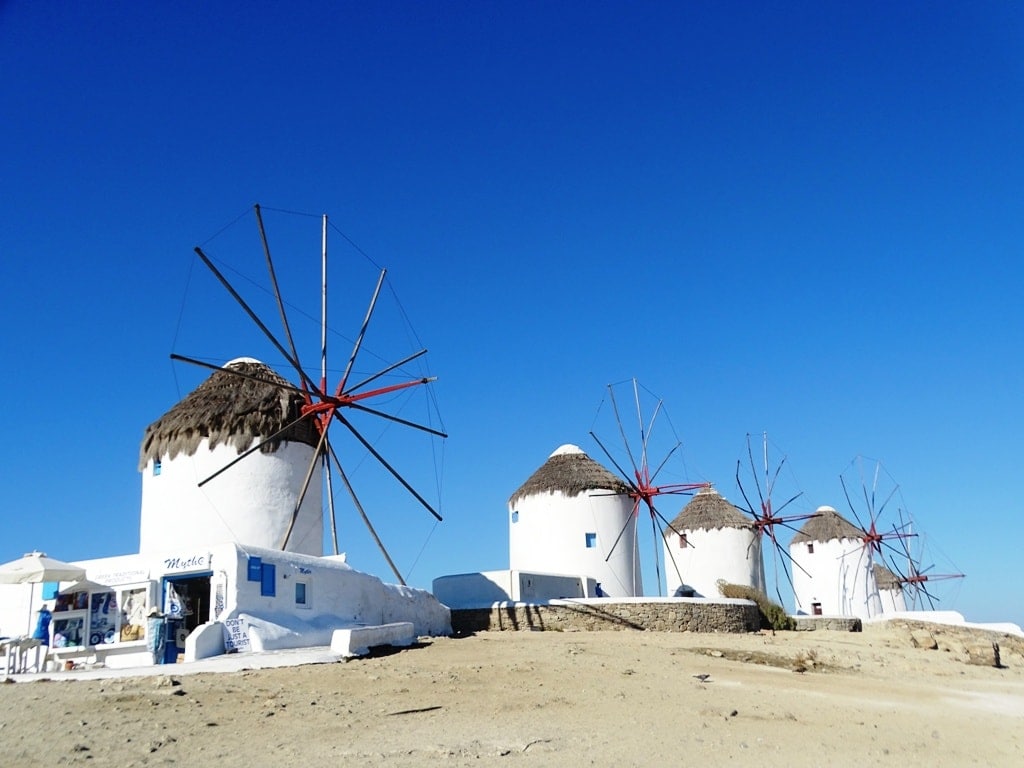 One of the ubiquitous elements of the Cycladic islands is without doubt the strong winds. Northern winds especially, called “meltemia”, blow powerfully and nearly constantly in all the Cyclades.

Mykonos is no exception! Located opposite and very close to the island of Tinos, which is literally called “the island of the winds”, Mykonos is blessed with similarly strong wind for most days of the year.

We say blessed despite the wind sometimes being a nuisance for beachgoers because the wind is a very important source of power. Nowadays with the growing need for renewable sources of energy, we all come to value very windy places, but the locals at Mykonos and most of the Cycladic Islands knew what to do with the strong winds for centuries: harness the power abundantly provided by building windmills.

That’s why there are so many windmills still around in all of the islands. However, the most iconic, beautiful ones are to be found in Mykonos!

Mykonos’ windmills are a magnificent landmark that characterizes the island. They are one of the most photographed places on the island and considering how Mykonos is one of the most popular tourist destinations, that is saying a lot.

If you are planning to visit Mykonos, checking out the windmills is a must. Here are some things to know that will make your visit even more enjoyable.

How to get from Athens to Mykonos

How to spend 1 day in Mykonos

How to spend 2 days in Mykonos

Things to do in Mykonos

A Guide to the Windmills of Mykonos

A brief history of Mykonos’ windmills

Windmills were built and in use in Mykonos from around the 1500s and up to the first decades of the 20th century.  The windmills were used to grind grain into flour, primarily wheat and barley. The farmers would take their crops to the mills, then receive the equivalent weight in flour or monetary compensation.

There were 28 windmills in operation in Mykonos. This intense activity made Mykonos rather affluent and a necessary port to stop and resupply for all ships passing through the Cyclades. Mykonos became famous and the main supplier of the iconic rusk called ‘paximadi’, which sailors used as their main substitute for bread on long journeys in the sea.

With the advent of electricity, the use of windmills for grinding grain was gradually abandoned and many of the windmills fell into disrepair.

Nowadays there are 16 windmills still standing, preserved and renovated, in Mykonos.

How a windmill is built and works

Windmills are built in a circular, tubular shape. They were typically three-story buildings made of stone and wood. The wood was of the best quality for durability in the demanding conditions of the island, namely the wind’s force as well as the sun, sea moisture, and salt.

The roof of the windmill was always made of wood, with the wheel mechanism firmly in place. The wheel itself usually had 12 spokes with triangular sails at the edges completing it. These sails were made of tough cotton fabric similar to the ones used for ships’ sails. They could also be manipulated to best capture the wind’s angle and make the wheel turn at the highest speed possible.

The wheel gave power to the grinding stones located in the roof. The grain was poured in between them and the flour was gathered on the second floor. The ground floor was used for weighing services as well as storage.

The windmills were located in areas that were both ideal for capturing the wind but also were easy to access with beasts of burden and carts that would carry grain and flour to and from the mill.

There were mills mostly in the areas of Kato Mili and Pano Mili. The Kato Mili mills were mostly the ones supplying ships and other islands with rusks and flour. The ones in Pano Mili mostly supplied the locals with the same goods.

These days many mills have been renovated into accommodations and bars which are quite popular thanks to their unique architecture and the breathtaking views they have thanks to their location.

Windmills to visit in Mykonos

Of the existing 16 windmills that are preserved and renovated in Mykonos, there are good ones located in Kato Mili as well as in Pano Mili to visit. The name “kato mili” means “the mills down below” and they were near the port of Alefkandra, while the name “pano mili” means “the mills high up” and they are on a hill at the edge of Mykonos’ main town, overlooking the entire side of the island in a stunning, panoramic view.

Of those, two mills are open to visits by the public: the Geronymos mill and Boni’s mill.

The Geronymos mill at Kato Mili is one of the oldest surviving mills of Mykonos, built in the 1700s, and was in constant operation up to the 1960s. It is fully renovated and retains its inner mechanisms for grinding flour. While this mill is not open to visitors on the inside, it is open to explore on the outside and take gorgeous photos of it and the beautiful view of the cluster of mills as well as the idyllic neighborhood of Little Venice. In the storage area of the mill, there is a jewelry and souvenir shop that you can visit.

Boni’s mill at Pano Mili has also been renovated to its original 16th-century condition and state. This mill is open to the public as it is part of Mykonos’ Agricultural Museum, one of the oldest museums of its kind in Greece.

If you visit Boni’s mill during visiting hours you’ll be able to go inside it, see all three floors, and be told in detail how it would work, as well as all the stages of processing grain and storing grain and flour. You can even observe the process of making the flour.

Around the mill, there are also other areas of traditional agricultural activity, such as a threshing floor, a dovecote, a grape treadle, and a well windlass. The view from Boni’s Mill is breathtaking too, not only because you can see so much of the island sprawled before you, but also because you’ll see other Cycladic islands in the sea. On clear days, you see several on the horizon.

If you happen to be at Mykonos on the second Sunday of September, do not miss a visit to Boni’s mill because you will participate in the annual Harvest Festival!

In the Harvest Festival, you will be offered free food and drink called ‘kerasmata’ (the word literally means ‘to give treats’) as you listen to live folk music and watch traditional dancing. There are also the ‘folk tale tellers’ (‘paramythades’ in Greek) who narrate stories from Mykonos’ past in traditional manners.

It is not an opportunity to be missed if you are there, as the Harvest Festival is a real revival of a time long gone: a real treat to experience, just like the delicious food and drink.