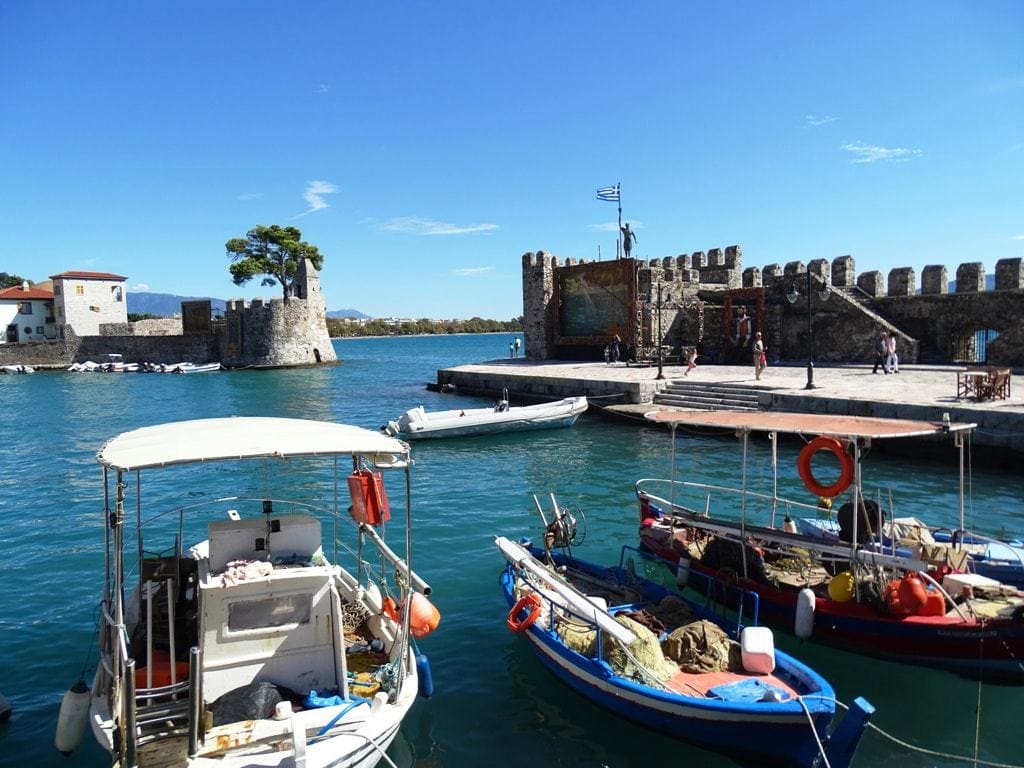 Nafpaktos is a coastal town in Western Greece. Although it is one of the most picturesque places in the Mainland, it is not so widely known to foreign tourists.  It is also a popular weekend destination due to its proximity to Athens, only 200 km away. What makes Nafpaktos so unique is that it combines the sea with the mountain and that it’s an all-year-round destination.

A Guide to the Best Things to Do in Nafpaktos

Nafpaktos is a town with rich history. The famous battle of Lepanto took place there, and every year at the beginning of October the visitor can see the reenactment of the battle. I was very lucky to visit Nafpaktos during that weekend and witness the celebrations.

There are many things one can do in the town of Nafpaktos:

Things to do in Nafpaktos

1. Visit the castle of Nafpaktos

Built on the top of the hill the castle has some of the largest and most well-preserved fortifications in Greece.  It was made during many construction phases from the antiquity until the Ottoman period. The view from up there is breathtaking as you can see the famous Rio-Antirio bridge and the Venetian Harbour.

2. Stroll through the old town of Nafpaktos

As you take the road from the castle towards the harbour, you can pass through the narrow cobbled streets of the old town with the beautiful houses and blooming flowers. On the way, you can stop and admire the great view from the tower clock and visit the Botsaris tower an impressive 15th-century house that is now a museum.

3. Walk around the Venetian harbour

The Venetian harbour of Nafpaktos is so picturesque; you will fell in love with it from the first moment you see it. It is surrounded by the fortification walls of the castle and on one side stands the statue of Cervantes, who took part in the battle of Lepanto and as a result lost his left hand. The harbour is the perfect meeting point with  great cafes and restaurants. I could sit there for hours and admire the surroundings.

4. Relax in on one the beaches

As I mentioned, Nafpaktos makes the perfect destination for your summer holidays as it has two beautiful beaches both with a blue flag.

Less than an hour away by car and you will find yourself surrounded by a forest, an incredible mountainous scenery with small streams and waterfalls along with picturesque villages.  I will tell you more about that in a next post.

Nafpaktos is a surprisingly beautiful destination more like a hidden gem. A place with historical interest, and natural beauty.

Where to stay in Nafpaktos

As our group was big we were separated into two hotels, Hotel Nafpaktos and Hotel Akti Nafpaktos. The hotels were located opposite to each other, just steps away from Nafpaktos beach and a 5-minute walk to the town centre and the Venetian harbour. I got to stay at Hotel Akti Nafpaktos a three-star, family-run hotel recently renovated. My room was spacious with a comfortable bed and a balcony that enjoyed a sea view. Breakfast was buffet style and had a great selection of fresh food. The staff was very nice and hospitable and I would recommend it to anyone visiting Nafpaktos.

How to get to Nafpaktos

By bus (Ktel): You can take the bus (ktel) from Κifissos station in Athens. The journey takes around three hours and there are a couple of buses that depart daily.

By car: The journey from Athens lasts 3 hours. You need to take the national road from Athens towards Patras, you cross the Rio – Antirio bridge and you follow the signs towards Nafpaktos.

Have you been to Nafpaktos? Did you like it?

36 shares
We use cookies to ensure that we give you the best experience on our website. If you continue to use this site we will assume that you are happy with it.Ok