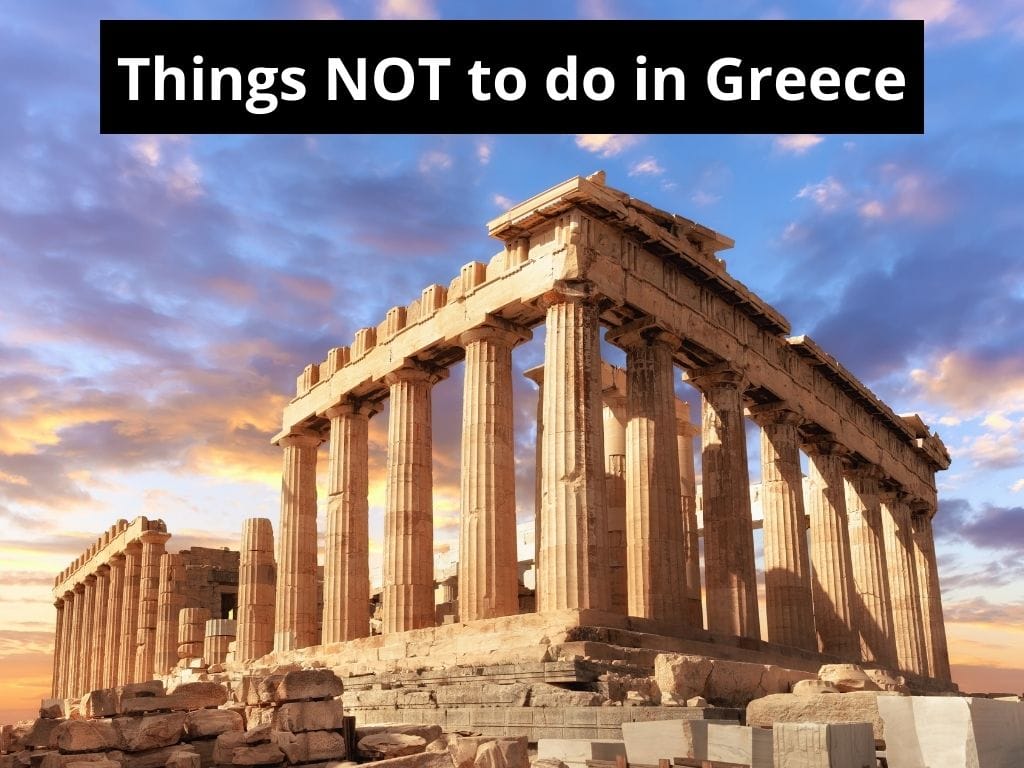 Going to Greece for vacations is a dream come true for many: from the hundreds of crystal clear, turquoise, emerald, and deep blue seas to the gorgeous verdant islands and the rolling hills and mountains, there is something breathtakingly awesome for everyone. No matter what type of vacations you like, Greece has you covered. Be it cosmopolitan, or wild and remote, or adventurous, or simply for relaxation and recharging of your batteries, in Greece you will make precious memories to remember and look back to.

Greeks are known for their hospitality, so being a tourist in Greece is like being the esteemed guest of a large family. Greeks generally feel they are ambassadors of their country when interacting with foreigners, so it’s likely that you will be supported and embraced most of the times.

There are some times, though, that differences in culture, expectations, and requirements might put you in a difficult position if you don’t know certain things in advance. Even if you don’t, you’ll usually get a pass and a polite request to do things right, but you’ll have a far better experience and get a lot more out of your vacation if you already know what not to do in Greece. Not only will you have smooth sailings wherever you choose to go in Greece, but Greeks will meet you halfway and enthusiastically respond to your efforts.

So what are the things not to do in Greece?

Things to avoid while in Greece

While sellers in Greece are required by law to have the equipment necessary to take your credit or debit card, it’s unwise to rely on that. Always have some cash with you because often in remote areas, very small and traditional tavernas, or in flea market stalls, only cash is going to be accepted. Especially when you visit tiny villages or places off the beaten path expect transactions to be done with cash rather than plastic.

Don’t rely on remote area ATMs either because they may be empty of cash if you try to use them. Just carry small amounts of cash for casual purchases.

Greeks drive precariously. Consider that they have adapted for driving in narrow roads of old cities not meant for the number of cars of a modern metropolis. They also tend to be impatient and in a hurry. That means a lot of signs and rules are bent or outright broken. Zebra crossings, for example, will not guarantee that drivers will slow down or stop to let you cross the moment you put your foot on the asphalt. Always double-check before you cross and look both ways, even if it’s a one-way street.

Don’t be reckless if you’re driving

In Greece, motorcycles and scooters wade in and out of the lanes, rarely, if ever, staying in the lane like cars do. Drivers may fail to use turn signals, there may be excessive pushing of the horn, and there may be speeding and disregard of stop signs.

If you are not used to driving in Greece, all of these elements might terrify you. Greeks generally pay attention even if they are reckless- after all, nobody wants to be in an accident- but it will pay off for you if you drive extremely carefully. Don’t try to drive like a Greek and don’t assume that right of way will guarantee the other cars will respect it. Follow these two rules and you will be okay.

If you do, for example to show the number five, you run the risk of insulting Greeks because you will have just done a ‘moutza’. A mountza is a derogatory gesture of shoving forward with your hand palm outwards and fingers splayed. That’s why you will see Greeks showing the number five palm turned inwards. Giving someone the mountza means you think them inferior, idiotic, and worthy of denigration.

The gesture is quite ancient and ingrained, and it causes a reaction in Greeks, though they will usually not consider it intentional if they know you are a tourist. Still, it’s best to take care not to do it.

One of the things you should do in Greece is visit its innumerable, and often quite ancient, churches. Greece is a predominantly Greek Orthodox Christian country. Scattered everywhere in the land are churches of all sizes and most of them enclose works of exquisite Byzantine and neo-Byzantine art. Even if you are not religious or you don’t ascribe to the denomination or the religion, you won’t be disappointed visiting them.

However, when you do, you should take care to enter with relatively modest dress. In most cases that would mean not walking into one in your bikini or topless for the men. In general, you are expected to be respectful within churches, and that begins with how you dress. A t-shirt and pants will do in 90% of the cases.

When you visit monasteries, a higher level of modesty is expected, such as covering the shoulders and wearing a long skirt if you’re a woman or long pants if you’re a man. Don’t worry; most monasteries provide that at the entry so you aren’t turned away. But just in case, when you intend to visit one, keep what you will need in your bag if you don’t like wearing it in the outdoors.

Greeks will say flippantly that they know how to tell a tourist by how lobster-like they look after a couple of days in Greece. Don’t be that person.

The Greek sun is relentless and will cause you pretty extensive and heavy sunburns if you don’t respect it. Don’t sunbathe during midday hours and definitely don’t do so without ample amounts of strong sunscreen.

When you go out, opt for light colored, breathable, cotton or linen long sleeved garments that will keep you cool and protect you from the sun. Opt for a wide brimmed hat to shade your face.

Don’t throw paper in the toilet

At least wherever you see a wastepaper basket located right next to the toilet or there is a sign asking you not to throw paper in the toilet, comply. Not only in Athens, but in most of the other cities and villages, the sewage system is old and worn. Flushing paper or, even worse, sanitary products, is a surefire way to clog up the system and nobody wants that.

There are some homes or venues where this is not required. If that is a case there will not be a basket for toilet paper right next to the toilet bowl. If you are unsure, simply ask.

While in many of the big cities, towns, and villages, the tap water is okay to drink, that isn’t the case everywhere. Always ask if the tap water is potable before going ahead. If you can’t ask anyone, be on the safe side and simply use bottled water.

Especially in the islands where water is often ferried in or pumped from wells, but also in certain areas in mainland Greece, the water is either too high on minerals or not filtered enough to be safe for consumption. However, the water is safe for cooking and washing as it is not contaminated by microorganisms or bacteria anywhere in Greece.

It’s awe-inspiring when you find yourself at the Acropolis, or the Temple of Poseidon at Sounion, or any of the thousands of archaeological sites all over Greece. It may be tempting to take a stone or pebble from the area as a keepsake or a souvenir. Don’t do that. It not only may get you in trouble with the authorities, but it is ultimately hurtful to the site and disrespectful to the country you are visiting.

Don’t touch the stones or artifacts that are not behind glass cases in museums either. That is harmful to the artifacts and it may get you escorted out of a museum.

Don’t take photos of or around military facilities

There will be signs warning that photography in certain areas where there are military facilities or military-owned areas is forbidden. Respect that rule so that you don’t get in trouble with the authorities.

If you find yourself at a saint’s feast day festival or other celebration where people spontaneously get up to dance in Greek folk line or circular dances, it’s very likely someone will pull you up to join or invite you to through gestures.

Don’t be embarrassed and don’t refuse! You won’t be evaluated or tested on whether you know the dance or not. Your dance mates will be more than happy to show you the steps. All you need to do is enjoy it and make merry. Through dancing in festivities, you have the unique opportunity to become part of the community for a few minutes, which is an experience you can’t buy.

Greeks are generally able to speak English, at least to a basic level. The language is taught in primary school and there is a culture of learning English to a proficiency level by late adolescence. So don’t assume that they won’t understand what you’re saying or overhear you correctly if you’re speaking English.

In fact, don’t assume so for any of the most prevalent languages in the EU. German, French, Italian, and Spanish are languages that are popular among the Greeks. Always ask if they speak the language before resorting to pantomimes and gestures.

Keep in mind that in more remote areas or with people over fifty or sixty years old English-language learning is less prevalent. Still, they will be more than happy to find ways to communicate with you to help you.

Don’t expect shops to be open on Sundays

Though this is gradually changing, on Sundays shops are customarily closed. This holds for big city centers and tiny villages alike.

Tourist shops may forego this rule, especially during high season, but don’t assume they will. Tavernas and restaurants don’t follow this rule, and they will most likely have a working day be the day off where they are closed, usually Monday or Tuesday. Ask if you intend to make plans.