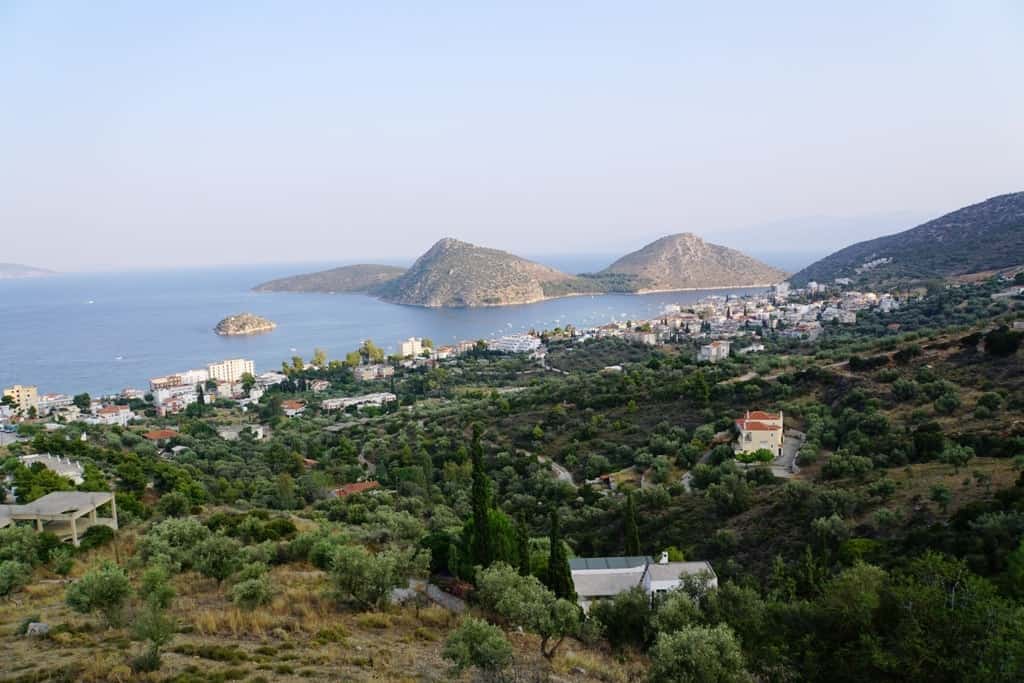 Tolo is a tiny fishing village turned tourist hot spot on the Peloponnese peninsula. It has a history dating back to the Homeric times and has always been a safe harbour for ships, even acting as an auxiliary port to Nafplio and a later port for the Venetians in the war against the Ottomans.

The current, modern town was founded as a refugee settlement for refugees from Crete following the Greek Revolution, who grew the city into a fishing village and tourist town. Tolo has a long, gorgeous beach perfect for water sports, swimming, and fishing, and a lively fun town with tavernas and bars. It makes a perfect holiday spot for families.

A Guide to the Best Things to Do in Tolo, Greece

The Argolida is easily accessible from Athens, with a plethora of historical sites and charming villages, and is famous for its citrus groves. The Argolid was the heart of Greece from 1600 to 1110 BC under the Mycenaeans, when it passed to Dorian control with the fall of the Mycenaeans, and later to the Romans. Nearby archaeological sites include Epidaurus, Asine, Tiryns, Mycenae, and Argos.

How to get to Tolo from Athens

Tolo is not far from Athens, only about 2 hours driving time.

The best way to get there is to hire a car, as driving outside of Athens is reasonably easy and the roads between Athens and the Peloponnese are good. There are road signs the entire way. If you are not comfortable driving, but like the freedom and ease of a car, you can arrange a private transfer with your hotel or hire a driver.

For travellers on a budget, you can take the public bus (KTEL) from Athens to Nafplio, then change for the bus into Tolo. Both buses operate on the hour, from early morning to early evening. If you take a taxi from Nafplio to Tolo, instead of the second bus, expect to pay around 15€.

17 Best things to do in Tolo

Whether you want to explore the archaeological sites and historical markers, tackle adventurous activities like diving or water skiing, or learn more about local Greek foods and  traditional means of olive oil and wine production, you can do it in Tolo.

The bay of Tolo is a lively, undiscovered dive spot. The bay is full of colorful sea life, shipwrecks, underwater caves, and more. There is a dive shop in Tolo that can assist with all your diving needs. – Click here for more information.

2. Explore the nearby islands by boat

Romvi, also known as the island of Aphrodite, is home to Byzantine church ruins, citadel walls and cisterns, and the remains of a Venetian naval base. Daskalio has a small chapel dating back to 1688. It is rumoured that during the Turkish rule priests had a secret school on the island, to teach the local children about their heritage.

Koronisi is the smallest of the three islands and is home to a tiny chapel that still holds weddings and baptisms. All three islands are uninhabited and accessible by boat from Tolo.

3. Hire a sail boat with a skipper

One of the best ways to explore the Bay of Tolo is by sailboat. Hire one with a skipper to leave yourself free to enjoy the sea air. With a day charter, you can explore the above islands, or you can hire a  boat for two or three days and visit Hydra, Spetses, and other nearby islands. Click here for more information.

4. BBQ cruise on a deserted island

Join a group boating trip to a nearby island for a barbecue. Enjoy the relaxing  vibe of the cruise, time on the beach for swimming or snorkeling, and then feast on traditional Greek foods, including grilled lamb or chicken, Greek salad, and tzatziki prepared by the skipper. Wine and beer are included in the cost.

The picturesque Agia Kyriaki Church is located just five minutes up the  hill from the centre of Tolo. It is a tiny whitewashed church with views over Romvi and Koronisi islands, the Bay of Tolo, and the surrounding coastline. The views are worth the hike, although if you prefer to drive there is a small parking lot.

Tolo is famous for its long, sandy beaches. Psili Ammos is the town’s main beach, which stretches from the town east to the headland. It is lined with tavernas, cafes, and bars, and closer to town has plenty of accommodation and shopping. Parking is available along the main road, or its easily walkable from town.

If you prefer a beach with no amenities, Kastraki is the place to go. It is located to the west of town, near the ruins of Ancient Asine, and is a small pebbly beach. There are no bars or cafes, so bring whatever kind of food and drink you want.

7. Have fun with watersports

With so many great beaches in Tolo, there are also great watersports. With Water Sports Tolo, you can go water skiing, tubing, wakeboarding, paddleboarding, or even hire a banana boat for you and your friends.

8. Check out the Ancient Assini

The ancient Assini, also known as the Kastraki, is the acropolis of Tolo and has been inhabited from the 5th millennium BCE until the early 600s CE. It was never a major site in the Argolid, but it still played an important, strategic role as a well-protected harbour during the Trojan War and other skirmishes. The archaeological evidence from nearby towns also indicates that the citadel had close ties with islands in the Aegean, including Cyprus and Crete.

The site was first excavated in the 1920s by a Swedish archaeological team and into the 70s by a Greek research team. The Hellenic fortifications remain, having been restored by the Ottomans and later used by the Italians during the Second World War. There is also a small church dedicated to the Virgin Mary.

9. Visit the archaeological site of Asklepios and the Ancient theatre of Epidaurus

The archaeological site of Asklepios and its famous Theatre of Epidaurus are two of the Peloponnese’s best archaeological sites. The sanctuary of Asklepios is dedicated to Asclepius, the son of Apollo, and the god of medicine. It was known in the ancient time as the most celebrated healing centre, which also had a guesthouse for people to stay at while asking the god for his healing powers.

The theatre of Epidaurus was used for performances and could hold up to 13,000 people. It was part of a complex that included a stadium and banqueting hall. Today, the theatre still holds performances in the summer.

10. Visit the Ancient site of Mycenae

Mycenae is another famous archaeological site just steps from Tolo. It is most well known as the home to the Mycenaean civilization, which dominated much of southern Greece – including Crete and Anatolia – in the 2nd millennium BCE. It’s peak was in 1350 BCE, when the settlement had a population of 30,000. Mycenae, as a settlement, is known for the Lion’s Gate, which was the main entrance of the Bronze Age citadel, and is the sole surviving piece of Mycenaean sculpture.

Ancient Olympia is near the modern town of the same name and was known in Antiquity as the centre of the Ancient Olympic Games and as an important Panhellenic sanctuary. It was dedicated to Zeus and attracted Greeks from all over. Unlike other ancient sanctuaries, Olympia extended beyond its boundaries, especially the parts that hosted the games. The ruins that can be seen today include the temples dedicated to Zeus and Hera, and the Pelopian, or a tomb turned altar for animal sacrifices. The site also highlights both the modern and ancient games, in two museums that share stories and history.

Nafplio is a charming seaside town and the first capital of Greece. It is located on the Argolic Gulf and has been an important seaport for millennia. Some of the most well known attractions include the mainland Venetian castle called Palamidi and the water castle, also Venetian, called Bourtzi. There are plenty of great restaurants  and bars to relax at.

The Agia Moni Monastery is a nunnery and small church near Nafplio. The church is dedicated to the spring of life, which is thought to be the mythological Kanathos, the spring where Hera is said to have renewed her virginity.

Karonis Distillery is a family-owned distillery and has been around for 145 years. They offer tours and tasting of their ouzo, traditional Greek liqueur, and tsipouro. Karonis also makes Massticha and cherry liqueur.

Olive oil is an integral part of Mediterranean culture. A tour and tasting at the Melas Olive Oil Factory will introduce you to the process of olive oil, from the groves of olive trees to the pressing and production of the oil. Melas also produces bio cosmetics.

16. Wine Tasting at Nearby Wineries

The Peloponnese is the most famous wine producing region in Greece, and the Nemea region in particular is famous for the wines it produces. Wine tours and tastings in the Peloponnese wineries introduce visitors to the vines and the growing, the harvest and production, and the ultimate wine.

Visit a traditional honey production unit and learn about the bees they keep, the art of beekeeping, and the hierarchy of a hive and structure of the society. Taste locally made honey at the end of the tour.

For more information about any of the above activities you can check out https://www.tolo.gr/

Where to Eat in Tolo

There  are some great, authentically Greek places to eat in Tolo.  Here are some of my favourites.

Taverna Akrogiali is the oldest family-run restaurant in Tolo. The menu is based on traditional Greek cuisine, using family recipes and good quality, fresh ingredients. Some of their specialities include souvlaki, kleftiko, and moussaka. Their wine list includes a selection of Greek wines, plus ouzo and other Greek beverages.

Golden Beach is a hotel with a great taverna located right on the beach. They serve fresh fish and classic Greek dishes. The perfect lunch spot.

Where to Stay in Tolo

The John and George Hotel is in the old part of Tolo, overlooking the bay. Many rooms and apartments have excellent, unobstructed views across the bay to the Romvi and  Koronisi islands. The hotel is family-run and offers 58 rooms and 4 apartments for family use.

All rooms are spacious and modern, with balconies or terraces overlooking the bay and pool area. There is a large pool for guest use as well as a small children’s pool. This hotel is great for families. – Click here for more information.

If you prefer to have self-catered accommodation, you will want to stay at Oasis. These apartments are sleek and modern with all the amenities travelers expect. Each apartment has a fully equipped kitchenette for your use, plus storage space for luggage and living areas to relax in. The property offers a small garden and barbecue space with a children’s playground. Great for families! – Click here for more information.

Tolo is a fascinating slice of unpretentious and laidback Greek life. It’s an ancient town that has come into the modern era without losing its sense of place and time. Whether you want to base in Tolo to explore the historical and archaeological sites of the Peloponnese or are coming to spend a week on the water, it is the perfect place to visit. With plenty of accommodation options, great dining, and lots of outdoor activities, Tolo has something for everyone.

11 shares
We use cookies to ensure that we give you the best experience on our website. If you continue to use this site we will assume that you are happy with it.Ok