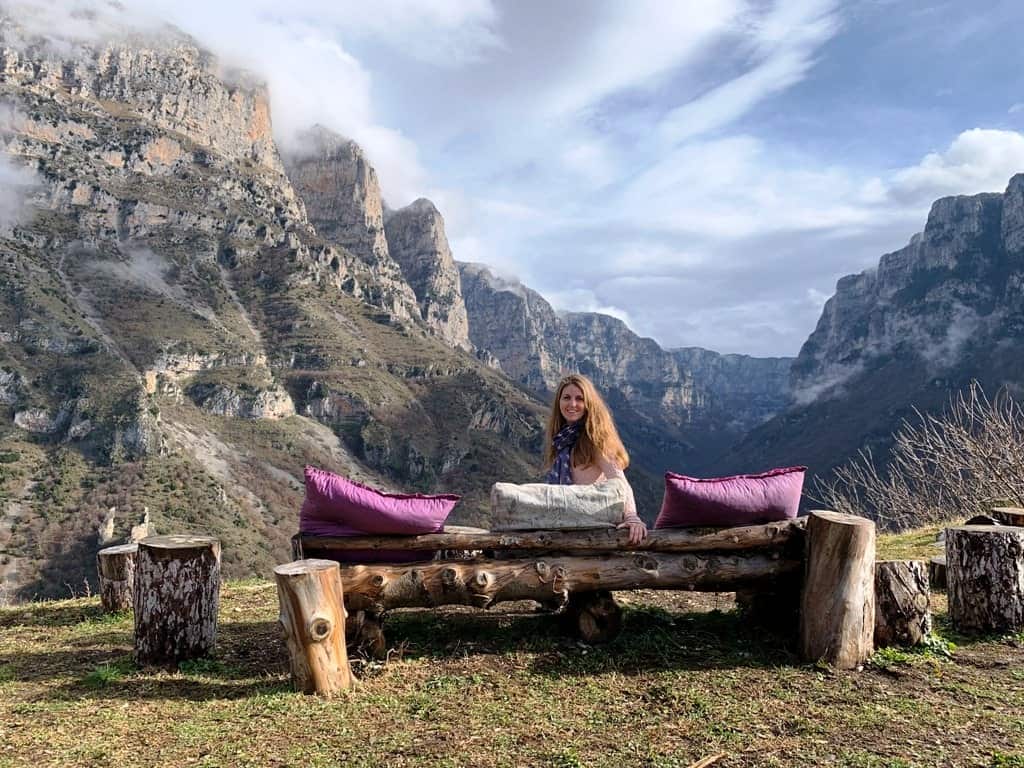 This lesser-known region, also known as Zagori, in North-West Greece is heaven-on-earth for hikers with its 1,000sq km of mountains, canyons, and picturesque stone villages. Here are the things you shouldn’t miss out on doing when you visit whether you’re a couple or a family.

10 Things to Do in Zagorohoria Greece

A tributary of the Aoos River, the Voidomatis River runs for 15km below historical bridges and past picturesque villages. Aristi is the first village from which you can explore the crystal-clear waters of the river with its historical bridges that span the water and ancient plane trees that line the banks.

Spend some time here taking photos and enjoying your surroundings and then follow the river either by following the river on foot along the footpath (the village of Klidoni is just 2 hours away), getting onto the water with some organized river-rafting or kayaking for which this village is known for or by hopping back into your hire car to follow the river to the next village.

Ready to explore Vikos-Aoos National Park from a different angle? Spend 3 hours paddling along the crystal clear waters of Voidomatis River and Aoos River as you pass beneath plane trees and past some of the park’s most iconic sights including Agioi Anargyroi monastery, and the artificial waterfall at Klidonia stone bridge.

Fun for the whole family year-round, no prior knowledge is needed for rafting with Trekking Hellas Ioannina as you’ll be given a safety briefing and provided with an English-speaking guide.

Located close to Megalo Papigo, just off from the twisting road that leads from Aristi, you’ll find naturally carved limestone pools of blue/green water – Be sure you have your swimwear with you as you’ll likely want to dive right into these natural pools if visiting in Summer!

You can also hike upstream from the pools to admire more of the interesting rock formations, have your camera ready!

Otherwise known as Plakida Bridge, this historical and famous three-stringer stone bridge is located just outside of Kipoi village and is a sight to behold for architecture fans and photographers as, viewed from above, it looks somewhat like a caterpillar thanks to its cogged ledges.

Built in 1814 in the traditional high-folk technique, commissioned by the monastery of the Prophet Elias to replace an older wooden bridge, Plakida / Kalogeriko Bridge is still a sight to behold to this day and is one of the few three-stringer bridges that still exist in the world.

Located at a height of 2000 meters, beneath Ploskos peak, in the middle of a stunning glacier-formed crater-like pasture on the edge of a cliff lies the breathtaking alpine Dragon Lake aka Drakolimni which you can swim in.

It can be hiked in a day whether you hike there and back from the village of Mikro Papingo or do the well-marked linear hike from Papingo to Astraka followed by Drakolimni and Konitsa but there’s also the option to make this hike less strenuous with an overnight stay at the Astraka refuge – If attempting to do it all in 1 day, be sure you get an early start as you don’t want to be doing this hike as darkness falls as you’ll be walking for 9 hours or so.

Listed as the world’s deepest gorge by the Guinness book of records with a depth of 2,950 meters at its deepest point, Vikos Gorge makes up part of the wider Vikos-Aoos National Park and contains 1,800 species of flora.

There are a variety of different entry points along the 12.5km hiking route through the gorge but the best entry point is at Monedendri village, exiting at either Vikos village or the further Papigo Village.

Rather than trying to hike the entire length of the gorge in a day which would require more than 12 hours of walking, without breaks, it’s a good idea to split the hike into shorter journeys so that you can fully enjoy your surroundings without the need to rush through.

Zagorohoria isn’t all about hiking and natural beauty – There are 46 fairytale stone villages dotted on the green mountainside of Pindus waiting for you to explore. The following are some of the best traditional villages that you can visit that remain virtually untouched since the 19th century.

Located at 960 meters above sea level within the Vikos-Aoos National Park are two of the most popular villages in the region; Megalo Papigo village and Mikro Papigo village meaning big and little or upper and lower respectively.

3km apart and connected by road and a designated hiking trail which passes 2 small lakes, both villages provide visitors with architectural delights and splendid natural surroundings and are the starting point for many excursions and outdoor activities.

Admire the view across Aoos Valley to the peak of Mount Timfi, see the underground cave of Provatina (the second deepest in the world), visit the traditional woodcraft workshop, and get wonderfully lost in the maze of backstreets as you gaze up at the hexagonal bell tower.

Having become a gateway for extreme mountain sports and alternative tourism, the traditional village of Kipi (aka Kipoi) is one of the oldest in the region and has both the Vikakis River and Bagiotikos River flowing through it ensuring nature lovers will be in their element!

Wander along the cobbled lanes admiring the picturesque stone houses from your position 800 meters above sea level, visit St Nicholas Church and the folklore museum of Agapios Tolis before deciding how you want to get your adrenaline pumping – rafting, canyoning, mountaineering, or more simply, hiking between villages.

Located on the edge of Vikos Gorge at 770m above sea level, the village of Vikos (also known as Vitsiko) provides the best views of the gorge. It’s a haven for hikers looking to explore the gorge with many footpaths leading from the village into the gorge, allowing you to take in the wonderful views of this place – For an easy walk just follow the path for 20 minutes downhill to the springs of the Voidomatis River.

The traditional village of Aristi is a popular tourist destination located on the edge of the Vikos-Aoos Natural Reserve with the Voidomatis River running through it. In the heart of the village, in the central square, you’ll find the church of the Assumption of Virgin Mary with its high belfry surrounded by quaint cafes where you can taste the traditional Epirotic pies filled with either cheese, meat, or vegetables.

Picturesque narrow streets lead off from the main square where you can window shop for folk art before admiring the Stamatis Mansion. Visit the 16th-century monastery of the Virgin Mary Spiliotissa if you have the time, alternatively go on a rafting or kayak adventure, many of the available river activities starting from this beautiful village.

Photographers and fans of architecture will want to stop off and see the stunningly picturesque 18th century stone bridge that spans 2 sheer cliffs as they drive between Kalapaki and Kipoi.

Follow the footpath and admire the view as you take photos from the riverbank, walk atop the historic, 1750’s bridge itself and, if visiting in the height of Summer, walk below the bridge on the dried-up riverbed to get another perspective of this historic piece of architecture.

In the charming village of Papigko, you can indulge in some delicious traditional pies and desserts, you’ll have deserved some high-calorie treats after all that exercise! With its terrace seating below the grapevines in Summer and fireside seating in Winter, Koukounari Cafe is perfect year-round.

The cozy cafe is family-owned, complete with a welcoming pair of dogs and manages to blend the comforts of the modern world with the aesthetics of a bygone time – a very pretty place to rest your legs as you recuperate over a coffee be it hot or cold and plan what to see and do next!

10. Food at Montaza Restaurant in Aspragelloi

At the square of Aspragelloi village, you will find the cafe-restaurant Montaza a great place to try tasty local cuisine.

The owner Giannis Tsaparis turned his family store into this restaurant and named it Montaza to honor his grandfather who had a shop with the same name in Cairo. We had a delicious meal that included salad, pumpkin soup, traditional pies, and grilled lamb chops.

The region of Zagori isn’t on travelers bucket lists in the same way that the iconic Greek islands are, but that doesn’t mean you shouldn’t be racing to book your tickets to explore this astonishing area of Northern Greece, you won’t be disappointed in what you find if you’re a fan of mother nature!

The trip was organized by Epirus travel in collaboration with Travel Bloggers Greece.