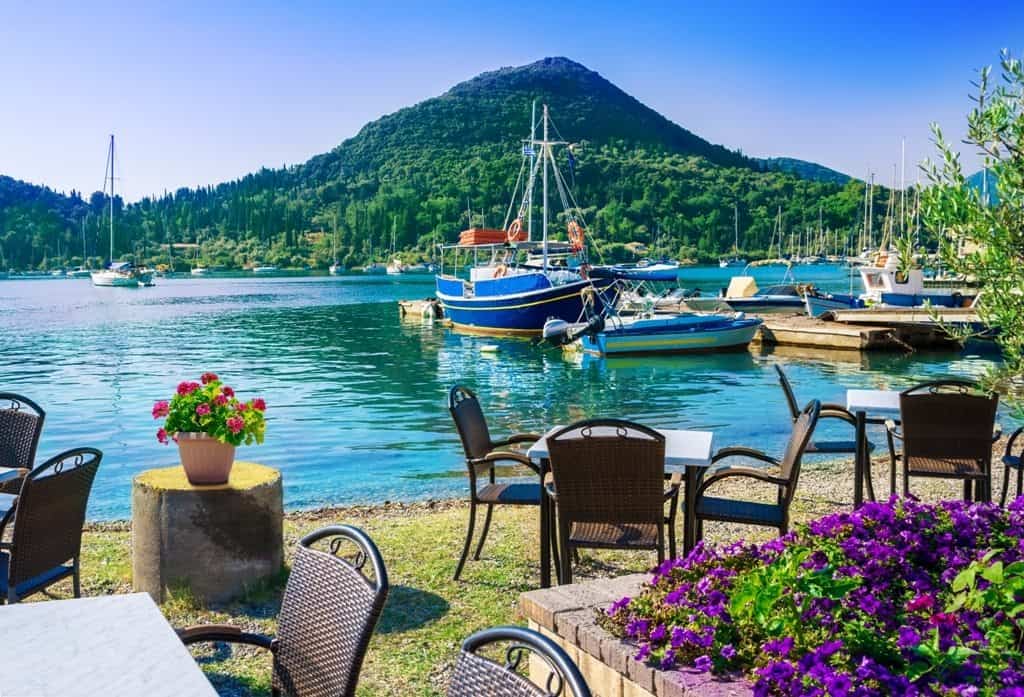 Lefkada is a small island connected to the western Greek mainland. It is linked to various Greek myths, like Sappho, Aphrodite, and Odysseus. The ancient town was founded in the 8th century BCE, but the island all but disappears from texts during the Byzantine period before resurfacing under the Epirians.

Under the Ottomans, it was a military settlement, and in later years was ruled by the Venetians, French, British, and finally Greeks. All this to say the island has a long history with a myriad of architectural styles, castles, aqueducts, and houses.

And, being a Mediterranean island, it also has the quintessential beaches, lush hillsides, and charming tavernas. It is a great place to stay and explore during a visit to and around Greece. In this post, you will find the best things to do in Lefkada

A Guide to Lefkada, Greece

Lefkada is an island off the western coast of Greece and it is part of the Ionian Islands. It is connected to the mainland by a causeway. Nearby islands include Skorpios, the island formerly owned by Aristotle Onassis, Kefalonia, Ithaca, and Kalamos. The island is only about 300 sq km, which includes some of the small nearby islets, and has a variety of small resorts in addition to the main town of Nydri.

How to get to Lefkada island

Lefkas Island is the only island in Greece that is accessible by car. There is a bridge that connects the island with the Greek mainland. If you don’t have a car you can go from Athens to Lefkada by a Ktel bus. The distance between Athens and Lefkada is 378 km and it will take you around 5 hours to get there.

You can also reach Lefkada by plane. The nearest international airport is Aktion in Preveza, which is 18 km away from Lefkada’s town.

Another option to get to Lefkada is by ferry. There are ferry connections between Lefkada and the other Eptanese islands (Ionian Islands) as well as Peloponnese (Patras and Kyllini ports).

The best time to visit Lefkada

Lefkada has a typical Mediterranean climate, which means it has hot summers and cool winters. The best time to visit is from May to October. June through August are hot and humid, so unless that’s your preferred climate, the shoulder seasons or early and late summers are ideal. The temperature also stays pretty stable at 20C-25C most of the year so even winters are great, except that you may find things are closed for the season.

How to Get Around Lefkada

The best way to get around Lefkada is by car. You can hire a small car at the Aktion Airport, in Preveza, if you fly. Having your own car will allow you to stop wherever and whenever you want, but if you are travelling on a budget then there are buses and taxis that can take you around the island. If you’re planning to explore the beaches, you can hire a water taxi or a sailboat to get you to some of the more remote beaches.

Best Things to Do In Lefkas

There are a lot of great things to do in Lefkada. Here are some of my favourites.

Check out the beaches

Lefkada has some really gorgeous beaches. Here’s a roundup of the most famous beaches on the island.

Porto Katsiki Beach is a family-friendly, popular beach about 45 km south of Lefkada. The abrupt white cliffs make for a beautiful backdrop against the golden sand and the cerulean sea. It is one of the most beautiful beaches in all of the Mediterranean. Porto Katsiki has bars and cafes near the beach, plus umbrellas, sunbeds, and changing rooms.

Egremni Beach is a wide, sandy beach near Porto Katsiki. It lies at the bottom of rocky cliffs. The beach used to be accessible by stairs, however, an earthquake destroyed them and the beach is currently only accessible by boat. The municipality is rebuilding the stairs and hopefully, this is ready for the summer of 2021.

Kalamitsi Beach is located 30km south of town. It’s popular and pretty but does not offer any amenities like umbrellas or sunbeds, so come prepared.

Milos Beach is west of Lefkada town and is a totally unorganized and secluded beach. This makes it popular with people who want to get away from it all. The beach is nudist-friendly so not ideal for those with children.

Vassiliki Beach is located in the town of Vassiliki, a popular resort town known for windsurfing. This organised beach offers windsurfing rentals and sailing, plus it has hotels, restaurants, bars, and tavernas for visitors.

Nidri Beach is a popular resort town, and as such, the beach is one of the most populated on the island. The beach is steps from town and offers parking, restaurants and bars, and more.

The Nidri waterfalls, also known as the Dimosari waterfalls, are located in a gorge on the outskirts of Nidri. They are in a lush, mountainous part of the island and are a great place for cooling off on a hot day. There are small rocky coves and lakes in the area too.

The Monastery of Panagia Faneromeni is a delight! The earliest church here – a chapel dedicated to the Virgin Mary – was built by one of the followers of St Paul the Apostle, Sosion, in the 1st century CE on the ruins of an earlier temple to Artemis. It later became a Cenobitic monastery and was expanded in the 17th century.

In the late 19th century it was destroyed by fire, rebuilt, and then subsequently destroyed in a fire and earthquake in 1948. In the 1980s, the current bishop renovated the property, adding guestrooms, a library and three-story Ecclesiastical museum, and a chapel.

They also added a small zoo and a nautical museum and spent considerable time restoring the gardens and courtyard. The monastery is open daily, and there is a dress code.

The Archaeological Museum of Lefkada is a small museum in the new cultural centre building in Lefkada Town. The museum houses artefacts from the Paleolithic era to the late Roman Empire. With just four rooms, the museum covers a wide range of exhibits, from daily life and tools to archaeological finds.

Take a Boat Trip to the Nearby Islands

Join a yacht party for the day! The Lefkas Cruises team takes daily cruises that depart Nidri and stop at a variety of beaches and ports on other islands, including Skorpios, Ithaca, and Kefalonia. The cruise company also offers cruises from and around other islands if you are island hopping in the Ionian archipelago.

Visit the Castle of Agia Mavra

The Castle of Agia Mavra is located right near the bridge to the mainland. Built in the 14th century, the castle was built on the fortifications built by the Count of Orsini, who was gifted the island by the French in the late 13th century. The castle grounds play host to various festivals and events over the summer but is a great place to explore.

The Lighthouse at Cape Lefkatas, or Cape Ducato, is located on the far southern tip of the island. It is high atop a sheer cliff, which is said to be where Sappho leapt to her death. Today the spot is used for hang gliding, while there is also a diving school here. You can visit the lighthouse grounds.

Visiting a local winery is a wonderful way to experience the food and flavour of Lefkada. There are only two grape varietals native to the island – Vardea and Vertzami – and you can taste both during a vineyard tour.

Lefkada Town is the main town and northernmost settlement on the island. It is just at the end of the causeway from the mainland. The town was destroyed by earthquakes in the 1940s and 50s, so many of the buildings you can see today are restored or new builds.

Some of the structures that survived include the 17th-century church, Agios Spyridon, located in the main square of the same name. Also don’t miss Mela Street, a colourful street covered with arcades.

Check out the Fishing Village of Vassiliki

Vassiliki is a lovely little fishing village south of Lefkada. It is protected by a natural harbour and is full of resorts and restaurants. The beach is organised with umbrellas and sunbeds. This is also a popular spot for windsurfing.

Don’t miss out on trying the local foods. Most of the restaurants are in Nidri, Lefkada, and Vassiliki, while in some of the small villages you can find tavernas. The best local products are wine, olive oil, sausages, pasteli, and honey. You can also try the local aphrodisiac, botargo, which are the ovaries of female fish.

Where to Stay in Lefkada

There are a few great places to stay in Lefkada. In Lefkada Town, at the north of the island, the Lefkadio Suites are a great option for families as each room is equipped with a sitting area, kitchenette, terrace, and ensuite bathroom. The hotel is a short walk to the main square and has plenty of dining options should you choose to eat out.

The east coast is another popular destination on the island of Lefkada because most of the towns are in sheltered bays. Hotel Nydri Beach sits right on the beach and offers rooms with balconies overlooking the beach.

Vassiliki is located on the far side of the island from Lefkada Town but is a busy resort town in the months of July and August. Hotels here include the exceptional Calm View and the superb Katerina Lefkada. Katerina Lefkada is right in town, and Vassiliki is easily accessible without a car, so this is a great hotel if you do not have your own transportation.

Calm View sits high above the town in the hills. Calm View’s rooms are spacious and bright, and most have balconies. At Katerina Lefkada, the quaint rooms feature either a sea view balcony or a mountain-view balcony.

If you prefer something quieter, the small town of Agios Nikitas might be ideal. The charming La Casa d’Irene has panoramic views over the sea from its clifftop location. It’s a great spot for couples, but having a car is highly suggested as it’s a 20-minute walk to the beach.

Hotel Agios Nikitas is right in town, only 6 minutes walk from the beach. The modern rooms evoke a beach house, while the stone courtyard has a classical Greek feel. Rooms are large and airy.

Lefkada is a unique place – an island with a rich history connected to the mainland of Greece. It’s within easy access to the rest of the country by air or car. Lefkada is an adventurous destination for travellers looking for active sports like windsurfing or hiking, foodie travellers in search of something delicious, and history buffs seeking places named in ancient literature. A great place to include on your next Greek itinerary.

Have you ever been to Lefkada?

314 shares
We use cookies to ensure that we give you the best experience on our website. If you continue to use this site we will assume that you are happy with it.Ok