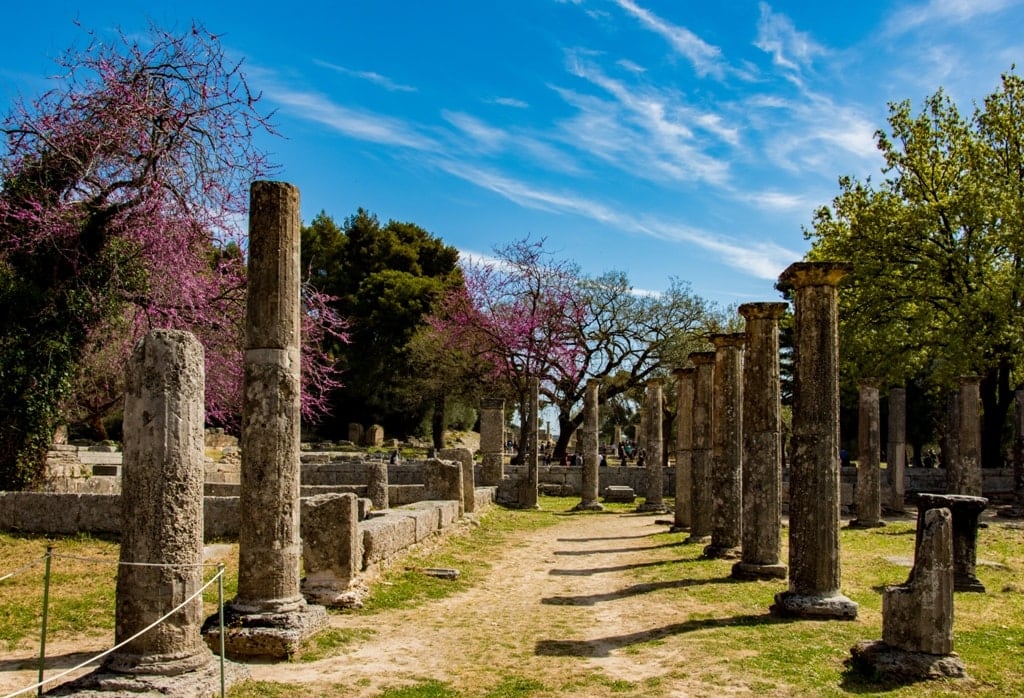 According to UNESCO itself, World Heritage sites are of outstanding universal value to humanity. They can be culturally, historically, or scientifically significant. Sixteen of Greece’s sites are cultural, while the other two are mixed. Greece is in the top 20 when it comes to the quantity of UNESCO World Heritage sites, tying with Turkey.

In this post, we’ll look at each and every one of Greece’s UNESCO World Heritage sites. You’ll get a brief overview so you know what to expect on your vacation. Let’s go!

Unesco Sites to Visit in Greece

The Acropolis of Athens was one of the earliest additions to Greece’s UNESCO World Heritage list back in 1988. The ancient city was built back in 2,500 BC and has a commanding position looking out over Athens from the hill of the same name. The Parthenon, Erechtheion, Temple of Athena Nika, and Propylaea have influenced architecture across the globe for centuries. One of the best views of the Acropolis can be had from Philopappou Hill.

Added to Greece’s list of UNESCO World Heritage sites in 1996, Aigai was the ancient Kingdom of Macedon’s first capital. Alexander the Great was proclaimed king here shortly after the assassination of his father Philip II. The archaeological site, which rests at the foothills of Mount Pieria, boasts a palace and several tombs.

Believed by the ancient Greeks to be the navel of the world, Delphi’s archaeological site is at the foot of Mount Parnassus. There are a number of edifices still standing, including a theatre, hippodrome and stadium. Not only that, but there’s also the Temple of Apollo and the Stoa of the Athenians. Delphi is where the Oracle, a woman named Pythia, was said to pass on divine messages to the leaders of ancient Greece.

Mystras, a fortified town in Laconia, was constructed much more recently than the ancient sites you’ve seen so far. Its castle was constructed on the slopes of Mount Taygetos in the 13th century. The area had been under the control of Franks, Byzantines, Turks, and Venetians before being liberated in 1834.

Dedicated to the God Zeus, Olympia was a major athletic and religious centre. It’s where early incarnations of the Olympic Games took place. Construction here has spanned a number of different periods – several buildings, including the first stadium, were built in the Archaic period. A gymnasium was added during the Hellenistic period, while Romans introduced hot baths and an aqueduct.

The most recent addition to the list, the Archaeological site of Philippi became a UNESCO World Heritage site in 2016. It is located in the present-day region of Eastern Macedonia and Thrace, and it was a prominent city on the road that linked east and west. As well as a Hellenistic temple, there are remains of a Christian Basilica from Roman rule.

Archaeological Sites of Mycenae and Tiryns

The Mycenean civilization flourished between the 15th and 12th centuries BC near to Argolis in the North East Peloponnese. Mycenae and Tiryns were two of the greatest cities of the time, and their ruins can still be seen today. They are linked to Homer’s epic poems – “The Iliad” and “The Odyssey” – which the World Heritage Convention say have influenced European art and literature for more than three millennia.

Delos is one of the Cyclades islands near Mykonos. It’s also one of the most important mythological and historical sites in Greece. Supposedly the birthplace of Apollo and Artemis according to Greek mythology, Delos became a prosperous trading port as it attracted pilgrims from all over Greece, most of whom had travelled to visit the Temple of Apollo.

The city of Rhodes was once home to the Colossus, one of the seven wonders of the ancient world. However, UNESCO recognised it as a World Heritage site thanks to its medieval history. It was the home of the Palace of the Grand Master of the Order, the home of the Knights of St John. The town is also packed with Gothic, Renaissance, Byzantine and Ottoman architecture. Visiting the charming town is like stepping back in time, although it offers surprisingly vibrant nightlife after sunset.

Monasteries of Daphni, Hosios Loukas, and Nea Moni of Chios

The Nea Moni Monastery is located in Chios is a small island close to Turkey where mastic, a resin used in cooking and medicine, is cultivated. The Monastery of Daphni is located on the outskirts of Athens while the Monastery of Hosios Loukas in Voiotia, a 2-hour drive from Athens. All three monasteries are far apart but share the same aesthetics. They date back to the 10th and 11th centuries and represent the second golden age of Byzantine art according to experts. The mosaics adorning the ceilings inside are truly beautiful.

The second most recent addition to the list of UNESCO World Heritage sites was Corfu Old Town in 2007. Known as Kerkyra in Greek, it dates back to the 8th century BC and is at the crossroads of the Ionian and Adriatic Seas. This strategic location meant that the Venetians built three forts here to defend the city from the Ottoman Empire. The narrow cobblestoned streets and squares are a lovely place to walk around in search of coffee and tasty food.

Paleochristian and Byzantine Monuments of Thessalonika

Thessaloniki was founded in 315BC and is the second largest city in Greece and the capital of the Macedonia region. It also happens to be just like walking around an open-air museum! Tourists often miss it off their itineraries, and that’s a great shame. The city was one of the first bases for the spread of Christianity, and there are lots of Early Christian churches, as well as Byzantine and Roman religious monuments.

Pythagoreion and Heraion of Samos

Pythagoreion is a fortified town on the tiny island of Samos in the Eastern Aegean Sea. It was an important centre of political and cultural development between the 5th millennium BC and the Middle Ages. You can still see a handful of superb Roman and Greek monuments here, as well as the Heraion – a temple with honours the Samian Hera. The ruins of the ancient harbour include the remains of a tunnel-aqueduct.

Sanctuary of Asklepios at Epidaurus

Asklepios is considered the birthplace of medicine, and one of the most important healing centres in both Greek and Roman worlds. Located in a tranquil valley in the Peloponnese, there’s evidence of a temple dedicated to Asklepios, baths and palestra. A fine example of ancient Greek architecture, the stone amphitheatre in Epidaurus is also one of the most complete examples of its kind.

Temple of Apollo Epicurius at Bassae

Though it was built sometime around 400BC, the Temple of Apollo Epicurious at Bassae was only discovered in 1765 when French architect Joachim Bocher stumbled upon it when walking in the Arcadian Mountains. It is the earliest temple in which Doric, Ionic, and Corinthian architecture are found together, the Corinthian Capital being the earliest surviving example there is.

Certainly the longest name on this list, this UNESCO World Heritage site is located on the Dodecanese gem of Pátmos. The island is said to be where St. John the Theologian wrote his Gospel and the Book of Revelation. The main town (Chora) has lots of important religious and secular buildings worth visiting, as well as a monastery built in the 10th century and dedicated to Saint John.

One of the most stunning sites in Greece, Meteora literally means ‘suspended in air’. It refers to a collection of 24 monasteries, six of which are open to the public, which sit at the top of rock formations in central Greece. The monasteries which you can visit are connected by paths and staircases, rather than the ropes and baskets that monks had to rely on in the olden days! Many of those who come to Meteora for the monasteries often stay for rock climbing and hiking.

Mount Athos is located on one of the three smaller peninsulas of the Halkidiki Peninsula. The mountain descends directly into the sea and was thought to be considered sacred by Zeus. Nowadays, it is a centre for Eastern Monastic Orthodoxism. That means that only male residents and visitors are allowed onto the mountain – even female animals are banned! Across the mountain, there are around 20 monasteries which are home to 1,400 monks.