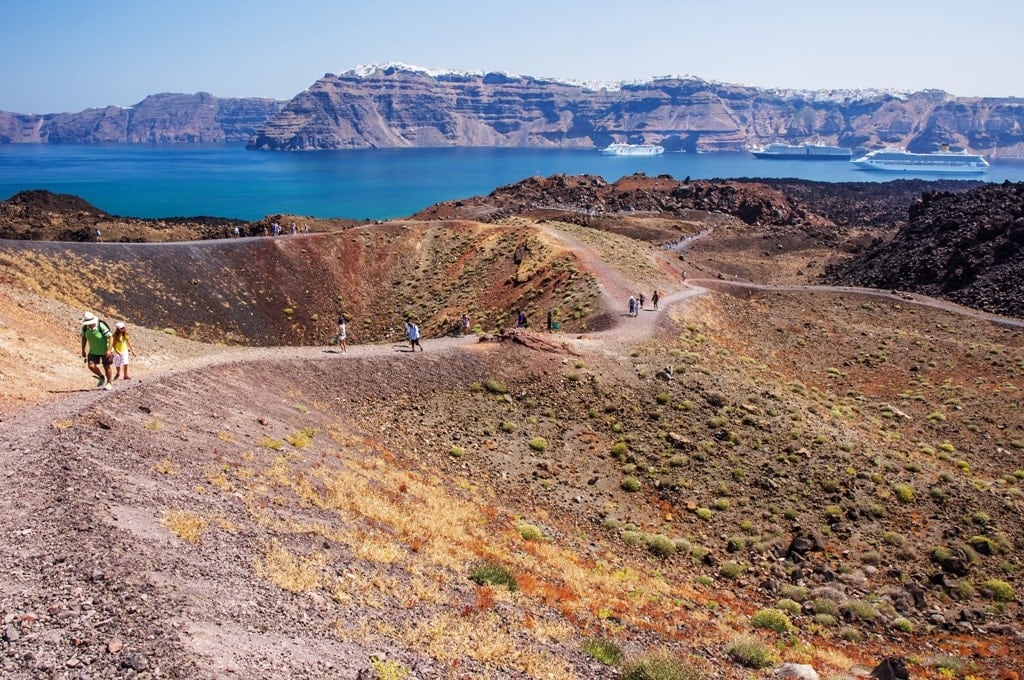 While Greece is known for its beaches, history, and fine food, its geography is just as fascinating. It has more than 6,000 small islands scattered across the Aegean and Ionian Seas, and many of these were created by volcanic activity. The Hellenic Volcanic Arc still sees lots of activity and is closely monitored by scientists today!

In this post, we’ll look at four of the best-known volcanoes in Greece – Santorini, Methana, Nisyros, and Milos. These popular tourism destinations are completely safe to visit, and you can learn a lot more about the volcanoes and how they’ve shaped the islands’ geography and history when you arrive. Before you travel, here’s a brief overview of each one.

4 Amazing Volcanoes to Visit in Greece

Many people will know the island of Santorini. It’s one of the most popular tourist destinations in Greece, with millions each year descending on this small island to admire its whitewashed houses and blue domed churches, which are built perilously into the caldera of a volcano. In fact, it’s the largest volcanic caldera on earth – 11km in diameter and 300 metres high. Much of the caldera is now flooded with seawater.

What fewer people will be aware of is that the volcano is still active. Santorini is actually the most active volcano in the Hellenic Volcanic Arc. We’re not talking about huge eruptions, lava spills and pyroclastic flows though. Rather, lots of smaller earthquakes and fumarolic activity like hot springs. There’s been nothing truly major since the last eruption in 1950.

The eruption in around 1,600BC is one of the biggest known volcanic eruptions ever to have occurred, and it devastated not only Santorini but much of the eastern Mediterranean. In fact, the eruption may have changed weather patterns across the world! A smaller but more recent eruption saw the creation of Nea Kamini in the early 18th century too.

Over the last 50 years, archaeologists have worked on excavations of a Cycladic town which has been buried under volcanic ash for around 4,000 years. Well preserved pottery and paintings are just some of the things that have been uncovered.

The Methana Volcano lies in the northeast of the Peloponnese on the shores of the Saronic Gulf, across the waters from Athens. The entire Methana Peninsula is made from lava domes and flows, but despite this, it’s one of the least known volcanic areas in Europe.

The volcanoes here are considered less powerful than the others in the Hellenic Volcanic Arc – namely Nisyros and Santorini. However, they are still active and there are around 30 points of intense seismic activity. The last large eruption occurred in the third century BC, while the last moderate eruption was in the 1700s. Today, there’s still volcanic activity on the peninsula, but it’s safe to visit.

The 417-metre crater has a trail which you can hike up, and the area is very popular with hikers and climbers. Many guided tours are organised on the peninsula, and you’re able to book them from the capital city Athens.

The volcanic activity around the Methana Peninsula means that there are lots of thermal spas in the area. Some of Greece’s earliest healing centres and spa towns were on Methana. There are some spa hotels on the peninsula where you can relax in the healing waters, if you wish to.

Nisyros is one of several active volcanoes in Greece. Located in the Dodecanese, it’s a popular visitor attraction for those who come to visit on day trips from the holiday island of Kos. It is one of the ‘youngest’ volcanoes in the Mediterranean, with its crater only being created 160,000 years ago. Incredibly, you can walk right into the heart of it across the Lakki Plain!

The largest and most popular one is Agios Stefanos, which measures around 25 metres by 300. You’ll see several fumaroles belching steam across the floor, and this is what powers the hot springs around the island. Other craters named Alexandros and Polyvotis are close by, but the soil is breakable and there’s a higher risk of getting burned.

Though Nisyros volcano is not likely to erupt anytime soon, there is geothermal activity happening right under your feet. If you feel your soles getting hot, it’s not your imagination. It’s best to wear something with a thick sole as flip flops can be downright uncomfortable!

As well as the Lakki Plain, the town on Nisyros is a lovely place to spend an afternoon strolling round the whitewashed houses or enjoying a drink in one of its squares.

The last of the volcanoes on our list, the volcano on Milos is said to be dormant. The horseshoe shaped island was created around two to three million years ago and is considered part of the Hellenic Volcanic Arc. Milos’ last known eruption was roughly 90,000 years ago. Though it’s no longer active, it has left the island rich in minerals. The largest bentonite mine exists on the island and a large amount of Milos’ population work in the mines.

One of the most intriguing geological formations left by the volcano on Milos is Sarakiniko Beach. The unusually smooth rock formations are completely white, and no plants grow on them. The beach is like a moonscape which drops into the blue of the Aegean Sea.

As well as Sarakiniko Beach, there are 70 more beaches on Milos which you can visit as part of your vacation. The island is also known as the home of the famous statue that is now in the Louvre museum – the Venus de Milo. Milos is well connected to the Greek capital Athens and the other Cyclades islands.