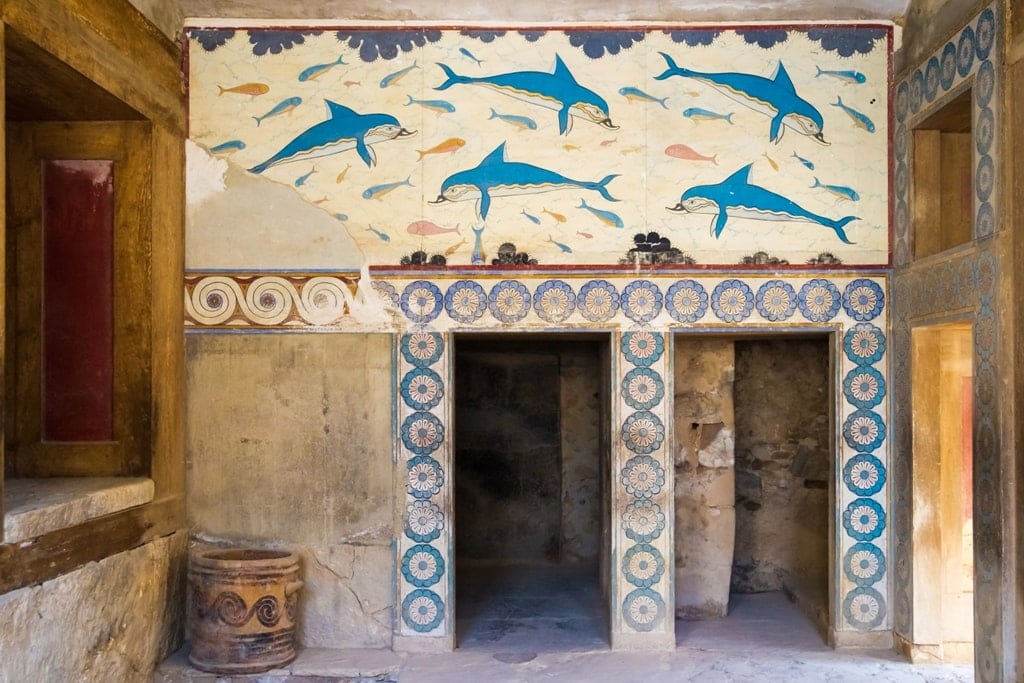 Animals carry symbolism. They are often powerful representations of various concepts. In that manner, many countries and nations have adopted an animal to symbolize them. This animal has a deep connection and connotation with that country’s origin, heritage, history, or environment. An animal that is symbolic of a country will often share attributes and characteristics in some way.

Greece has two animals and a mythical one that have been adopted as the national animals:

The dolphin is one of the Greece’s national animals. It has been featured prominently in Greek art as far back as Minoan times. The dolphin’s name in ancient Greek means “fish with womb” which is pretty apt for a sea mammal!

The legend that made the dolphin dear to ancient Greeks and modern Greeks alike has several variations through the eons, but the general gist of it is that a ship is wrecked in the middle of a fierce storm, tossing the helpless sailors in the turbulent waters, and condemning them to drown. But the dolphin (or Poseidon, or the Virgin Mary who sends it) takes pity on the drowning men and comes in droves, saving the sailors from sinking and letting them hold on (or even ride them) to shore, and safety.

Greece is a maritime nation and has always been. With over 2000 islands and millennia of sea faring, it’s no wonder that the dolphin is so dear to the Greeks. In fact, killing a dolphin in ancient Greece was a crime punishable by death!

The dolphin symbolizes compassion, hope, and help and allegiance, as well as the good side of the sea, all qualities and concepts that the Greeks hold in reverence, and hence the dolphin has become one of the national animals.

Because the owl can see in the dark, it is associated with knowledgeability, but coupled with the ability to apply this knowledge to one’s benefit and that of one’s society. In ancient times it was also considered a sign of the goddess Athena’s blessing. Now, it is seen as a symbol of one’s love for knowledge of all types, from hard science to philosophy and art.

The little owl is also a symbol of the quest for truth. Greece has always been a nation in love with philosophy, sciences, arts, and knowledge in general. Greeks also seek to find truth and stand up for it throughout history’s turbulent times, so the little owl has become Greece’s national bird.

The phoenix is a mythical bird said to live a long life of many centuries and never actually die. When it wanes, instead of death it bursts into flames and is reborn of its own ashes, for the cycle to begin again.

The phoenix holds deep symbolism for Greece, and due to its recent history, it also holds common emotional pain.

The phoenix is Greece’s national bird because it symbolizes Greece’s endurance through the millennia as a nation. The rising from the ashes instead of dying also is paralleled to Greece’s capacity to be reborn as a modern nation after 400 years of Ottoman occupation. Some argue this is not the only time Greece was reborn: it was reborn as the Byzantine empire, and it was reborn again after the devastation of the sacking of Constantinople of 1204 to live on as the last of the Byzantine empire before 1453 when the Ottomans destroyed it.

However, though the phoenix has always been deeply symbolic of Greece, the dolphin and the little owl are featured a lot more prominently, simply because the 1967 military Junta sought to make the phoenix its own symbol, and many associate it with dictatorship and totalitarianism now, rather than the hopeful message of rebirth and eternal life.

Regardless, the phoenix remains a powerful symbol of Greece as does the myth around its conquering of death eternal.