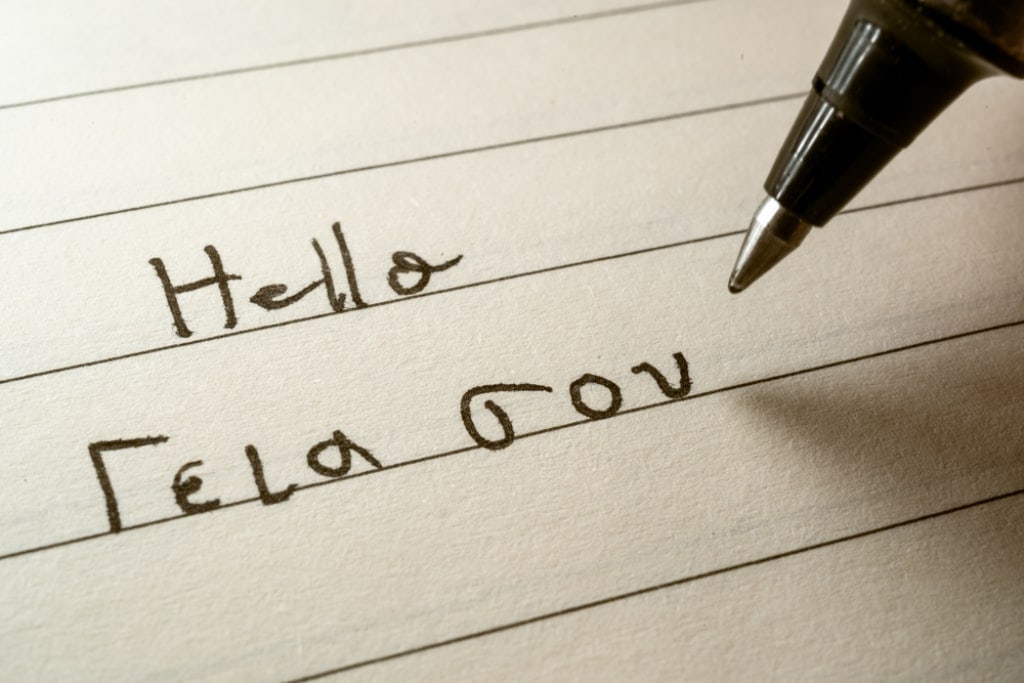 Though the modern Hellenic state was founded in 1830 after the War of Independence in 1821, Greece as a presence and Greeks as a people boast roughly 6,000 years of history. Some accounts credit the Greeks as having come up with the concept of a nation some 3,600 years ago! And while the tumultuous Greek history is such that the Greek modern state has only been around for 200 years, its official language, Greek, is just as old as the people that speak it.

But that isn’t the only thing to know about the Greek language and all the other languages spoken in Greece! Here is what you need to know and what to expect to hear spoken when you visit:

The official language is Greek

The only official language of Greece is Modern Greek and it is spoken by 99.5% of the population.

The distinction “Modern” for Greek is necessary as there are many versions and iterations of the Greek language, several of which you may encounter as you explore the country. Up until 1975, Greece had the issue of “diglossia” (i.e. “two languages spoken”).

That meant that whole the population spoke what is called koine or demotic, which is what would be referred to as “modern” today, and the state demanded all written language to be in Katharevousa, which is an archaic, more official version of the language favored by turn-of-the-century scholars and sounded a lot like the Hellenistic Greek spoken in Byzantine times and found in the New Testament.

If you happen to attend mass in a Greek Orthodox church, you will be listening to the priests speaking in a version of Katharevousa when reading from the Gospels or reading any ecclesiastical texts.

Modern Greek can sound rather like ‘flat’ Spanish, as foreigners tend to attest, but that is only the ‘main’ dialect, which would be encountered in the cities. As you explore the various provinces of Greece, you will encounter the colorful dialects of Greek! There are at least ten different dialects that are officially recognized as such, but the most prevalent ones you’re likely to hear are:

Cretan Greek: Spoken by Cretans and extremely prevalent in the island of Crete, Cretan Greek has a characteristic musical flair to it with slightly longer vowels than the main Greek dialect. It lends itself to short poems called mantinades, which Cretans are famous for creating on the spot much like Haiku poems in Japan!

Cypriot Greek: Spoken by the Greek Cypriots, this dialect is said to be the closest to hearing Ancient Greek being spoken today! Not only in pronunciation, but also in grammatical and syntactical elements, Cypriot Greek maintains a lot of otherwise abandoned features of the original Ancient Greek of classical times.

Pontic Greek: You are most likely to encounter this dialect in Northern Greece. It has a distinct sound of heavy consonants and short vowels. Pontic Greek is a fusion of the ancient Ionian Greek dialect with the Byzantine koine Greek.

Greek culture is oriented towards good hospitality and commerce. As a result, speaking multiple languages is considered a must for Greeks. The languages you’re safe to assume a good majority of Greeks can speak from a competent to a proficient level are:

English: English is considered a vital necessity for education and career advancement in Greece. As a result, the vast majority of Greeks can speak English fluently or at least at a functional level. There is a thorough transliteration of all road signs and road names, with translation provided in English where necessary. If you speak English, you won’t have an issue finding your way around in Greece!

French: French is a very popular second foreign language for Greek students, so it’s quite likely that you will find Greeks able to speak it without much trouble.

German: Competing with French in popularity, many Greeks opt to learn German as their second foreign language.

Italian: It’s the fourth most popular foreign language learned as Greeks frequently seek to work and study in Italy.

Turkish: Especially in Western Thrace, you will encounter Muslim Greeks and Turks of the Turkish minority in Greece speaking Turkish.

Albanian: Albanians are the biggest minority in Greece, living everywhere in the country. There are a lot of intermarriages with Greeks, so it is very possible that you will hear people speaking Albanian at random times, often in a mix with Greek!

Russian: Russian is rather prevalent along with other Slavic languages including Bulgarian, as there are immigrant waves from Russian and the northern Balkans coming into Greece and settling permanently.

Despite Greece’s near-complete linguistic homogeneity of modern Greek spoken by almost everyone, a remarkably diverse variety in dialects and languages flourish in a beautiful mosaic of sound and expression that carries a historical legacy fused with life’s current rhythm.