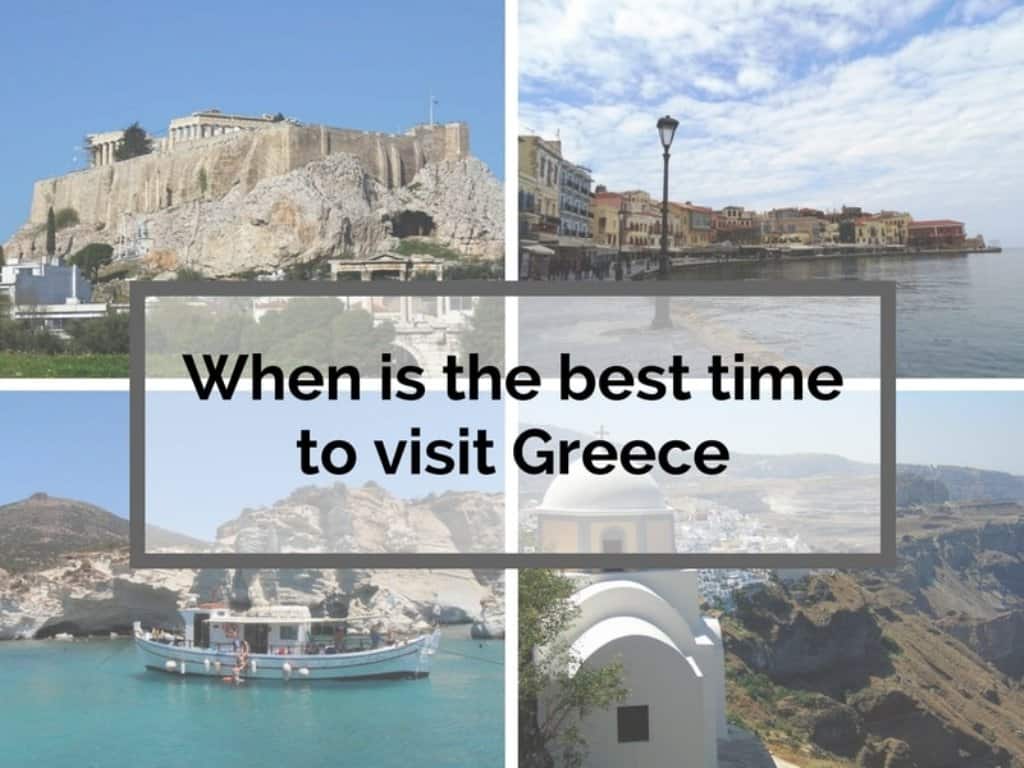 Greece is a popular tourist destination thanks to its varied landscape and fascinating history and culture.  One of the most common questions visitors have is “When is the best time to visit Greece?”. The answer varies depending on your interests, budget, penchant for heat, and the places you want to visit.

Here I’ll summarise the best time of year to visit Greece and give you a bit of an idea about the differences in seasons, where to visit when and some festivals that you should look out for while traveling!

Generally speaking, the best time to visit Greece is during the shoulder seasons – spring (from April until mid-June) and autumn (September- October).  During these months the weather is mild, days long and bright and both the cities and the islands are less crowded. Of course, these shoulder seasons lie outside of summer holiday dates so it may be more difficult for families, but if you could travel during May and October half-terms you’d be in for a treat!

Spring sees wildflowers and fewer crowds, while autumn boasts warm seas that have been heated up through the long summer months.

Planning a trip to Greece? Check out how to spend one week in Greece.

July and August are the peak summer months and as such it gets very crowded, especially in popular destinations like Mykonos, Santorini, and Rhodes.  Planes, boats, and hotels are often pre-booked, and everything is more expensive during this time. Plus, it’s worth noting that is it VERY hot during July and August in Greece, with the temperature usually lying in the 30s and 40s!

August is also the month that most Greeks take their annual leave. The only exception for this is the Northern part of Greece, the area of Halkidiki, and the islands of Thasos, Samothraki, and Lemnos where it’s preferable to visit from mid-June to mid-September for better weather.

Personally, I would avoid visiting in August at all costs. Especially the period around the 15th of August as that is a big religious holiday here in Greece and everyone is on vacation. If July was my only option, I would head to one of the many not so widely known islands but still equally beautiful. Serifos, Sikinos, Syros, Andros, Karpathos, Lemnos, Astypalea to name a few.

On the other hand, Athens is empty during August, but it’s extremely hot, and a lot of restaurants and bars are closed. This doesn’t mean that you won’t find somewhere to eat but that you will have fewer options, and it will be mostly touristy places that are open rather than authentic restaurants where locals dine.

Most hotels and restaurants in the islands are closed from mid-November until April so it’s not one of those best times for a Greek island vacation. You will still find places to stay and eat, but the options are limited. The weather also isn’t the best during winter (with most days having temperatures in the early teens), so don’t expect Greece to be a scorching winter sun destination.

It’s better to head to big islands like Crete, Rhodes, and Corfu during the low season as they have a year-round tourism infrastructure and plenty to do. There are a few places that stay open in Santorini as well during winter so this is a lovely time to visit the picturesque island in peace and quiet! If it isn’t too windy you should have an amazing time there during winter.

December to March are usually the coldest months often accompanied by some rain and a little snow. If you don’t want to head to the larger islands and would like to visit cities like Athens, Thessaloniki, Nafplio or head to famous archaeological sites like Delphi, Meteora, and Ancient Olympia, then you should consider visiting Greece this period. Hotels and restaurants in mainland Greece don’t close during the winter months, and everything is cheaper and less crowded.

If you are interested in activities like hiking Greece’s beautiful island trails or bird watching, the best time to visit is during Spring and Autumn. The mountains and fields are filled with an array of wildflowers during spring and the temperatures are yet to get too hot for hiking throughout the day. Lesvos, Crete, and Tilos are all great for bird watching in spring. Crete is also home to some of the best walking trails in Greece, with the famous Samaria Gorge being a hotspot.

The summer shoulder season is the best time for island hopping in Greece thanks to the glorious weather and regular ferry service. The majority of ferry routes open up their schedules towards the end of May/beginning of June so you are able to fit in a number of islands in a few weeks (rather than having to wait at least a week on each island during the winter timetabling).

The ferry service and flights are extremely busy during July, August, Christmas, and Easter so if you plan to visit during these times, you should always book ahead.

From October until March the ferry services and flights are cut back, especially to the smaller islands, but you can find a lot of deals during these periods. Last year I visited Santorini from Athens in November and my return flight cost me 20 €!

Check out: A Guide to Greek Island Hopping.

Best Time of Year for Swimming in Greece

The latter months of the year are best for enjoying the Mediterranean, Ionian, and Aegean seas as they have had time to warm up over summer. The Aegean is arguably one of the best seas in the world, with barely any waves, small tidal changes, and blissfully warm temperatures throughout September and October. If you’re feeling brave, you may even be able to swim off the coast of Rhodes or Kos into November and December (providing the sun is shining!).

Best Time of Year for Sailing in Greece

If you have your own boat or would prefer to rent one than rely on public ferries, sailing in Greece is a fantastic choice. There are so many islands – both inhabited and not – to explore, with plenty of secluded coves only accessible by boat.

The best time to sail in Greece is again during the shoulder season when prices will be lower, beaches and attractions less busy, and ports and coves free from cruise ships. The islands are likely to be more verdant and are great for on-land exploration during the spring, but the seas are warmer and more alluring during autumn so you’ll have to decide what is most important for your trip.

Best Time of Year for Sight-Seeing in Greece

Greece has some epic sites of cultural importance that are a must for anyone with an interest in history or philosophy. Thankfully, most sites are open year-round so you can discover ancient ruins and temples whatever the weather.

It’s best to explore Greece’s sights during April-June or September-November so that temperatures are not too hot so as to ruin your experience. If you wish to enjoy a sightseeing holiday in Athens, you can pretty much visit any time between September and June as it won’t matter being in the capital during winter.

Best Time for Nightlife in Greece

Many of the Greek islands have been famed for their nightlife over the years with everything from the 90s “Club 18-30″ strips to stylish beach-front bars in Mykonos. Today, the islands of Mykonos, Paros, Ios, and Skiathos are the best for buzzing nightlife, with world-renowned DJs coming here to play during the summer months of July and August. The parties here rival those of Ibiza and the stunning settings make for a party holiday to remember!

When to travel to Greece – Greek Festivals

Pretty much every month of the year in Greece has some sort of festival or celebration going on, with large religious ceremonies and carnivals creating color and character in towns, cities, and islands across the country. Food plays a major role in Greek celebrations so whether it’s a national festivity or a name day for a relative, there is likely to be a feast and lots of sweet treats involved!

Here I’ve chosen a select few festivals that are fun and famous, but it’s worth researching your chosen destination and time of year you are visiting to find out what is going on at that time.

New Year’s Day in Greece is a double celebration that combines classic New Year traditions with Christmas. Saint Basil is the Greek equivalent of Father Christmas so gift-giving is often saved for New Year’s/Saint Basil’s Day rather than 25th December. A vasilopita cake is usually baked (with a lucky hidden coin inside) and card games and family celebrations are the norms.

While almost every island celebrates Carnival in the lead-up to Lent, Patras Carnival is probably the largest and most famous of all. The carnival features parades, feasts, dancing, and more and runs for almost a month throughout January and February each year!

Clean Monday or Kathari Deftera is a large celebration in spring that marks the end of the carnival and the beginning of Lent. Traditionally it was a time of using up meat, dairy, and fish before clean eating during lent. While most cities and islands celebrate Clean Monday with a traditional family feast, Galaxidi on Greece’s mainland takes it to a whole new level with an epic color flour battle across the town!

Independence Day and the Feast of the Annunciation (March 25th, 2022)

March 25 is another double celebration in Greece with both the country’s Independence Day and the religious Feast of the Annunciation falling at the same time. Both are a cause for celebration with parades, dances, feasts, and fanfare spreading across the country.

Easter in the Greek Orthodox calendar falls a week later than Easter elsewhere and is probably the biggest celebration of the year. Most Greeks will go to church services during Holy Week and will undertake traditions such as lighting Easter candles, firework displays, and family meals with a goat or pig as the centerpiece.

The Olympus Festival is a huge celebration of art and culture that is held at Mount Olympus, the House of the Gods, each year. The festival has been running for almost 50 years and hosts dance and theatre performances as well as art exhibitions and archaeological seminars.

After Easter, Panagia is the next biggest celebration in the Greek calendar. Panagia, or the Feast of the Assumption of the Virgin, is celebrated on the 15th of August and is a national holiday across the whole country. Locals flock to their nearest church to light a candle or take a pilgrimage to the cathedral of Panagia Evangelistria in Tinos, one of the country’s most important churches.

Finally, Ochi Day on the 28th of October is a national holiday to celebrate the day that the nation said “no” to the Germans and Italians in 1940. This festival is celebrated with military parades, traditional dancing, and children in local dress and is a big day for all involved.

To summarise: When to visit Greece?

Due to its mild climate, Greece is an all-year-round destination. Depending on your budget and activities you can choose the appropriate time to visit.

If you have any questions, about when to go to Greece leave a comment below.

What is your favorite time to visit Greece?

269 shares
We use cookies to ensure that we give you the best experience on our website. If you continue to use this site we will assume that you are happy with it.Ok