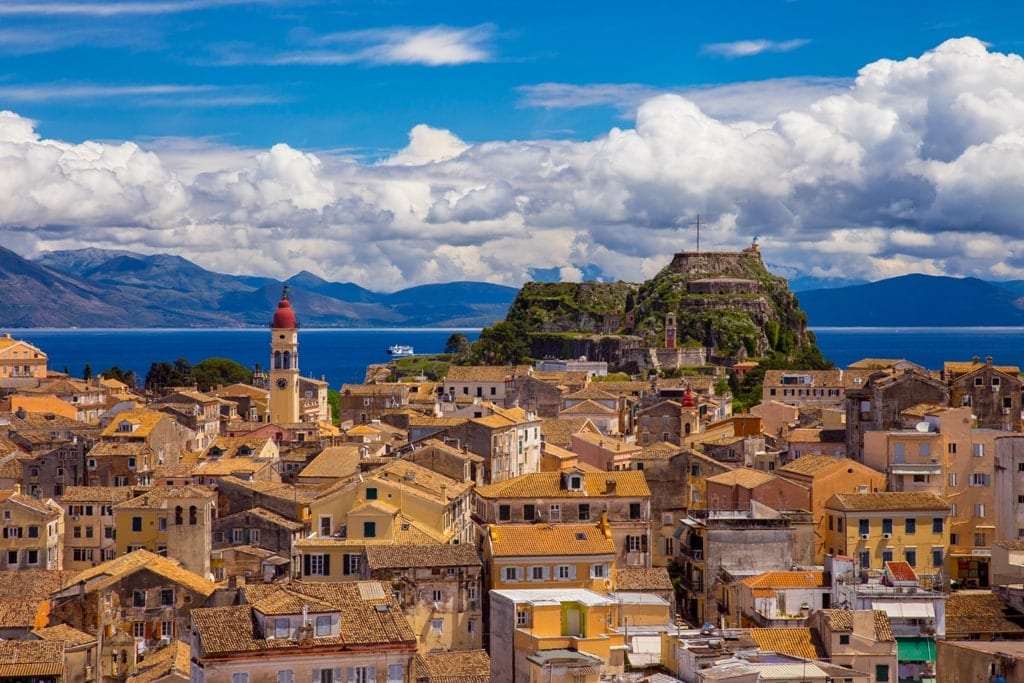 Corfu is the Venetian name of the island of Kerkyra, in the Ionian island group at the west of Greece.

Kerkyra is the unparalleled queen of the Ionian islands. The beauty, history, and uniqueness in architectural style and music are so exquisite that there have been Greek songs written about the island and its unmatched magnificence.

If you choose to visit Greek islands, Kerkyra (Corfu) must be a top contender. Not only it is likely you will get more value for your money since it is not as popular with tourists as the Cycladic islands of Santorini (Thera) and Mykonos are, but you will have a taste of authenticity and island life that goes beyond the expected and stereotypical.

Kerkyra boasts gorgeous beaches, lush green rolling hills with hospitable shade to protect yourself from the sun, amazing vistas, and a combination of the picturesque, laid back, slow tourism with exquisite, cosmopolitan resorts. And that would be enough, but there’s a lot more to enjoy and discover.

Where is Corfu Island?

You can get to Kerkyra (Corfu) by plane and by boat:

If you choose to fly in, you can use Kerkyra’s international airport, called Ioannis Kapodistrias, which works around the year, during high and low seasons. There are direct flights from several European countries, depending on the season, but you can always rely on flights from Athens and Thessaloniki. The airport is 3 km from Kerkyra’s main town, which you can reach by bus, taxi, or car. Buses leave from the airport on the regular.

If you choose to get to Kerkyra by boat, you have several options:

You can take the ferry from the cities of Patra or Igoumenitsa, which is the most usual itinerary from mainland Greece to the island. Take into consideration that if you choose the port of Igoumenitsa, you’ll be at Kerkyra in a couple of hours, whereas if you leave from the port of Patras, it’ll take you around seven hours to get there. To get to either of these ports if you are in Athens, you can take the KTEL bus or book a taxi, depending on your budget.

You can reach Corfu from ports in Italy as well, namely from the ports of Venice, Bari, and Ancona, making Kerkyra your gateway into Greece that way!

If you already are in the Ionian islands but not in Kerkyra, you can travel from one island to the other without going back to the mainland:

You can catch a ferry from the small island of Paxi directly to Kerkyra or catch a short flight from Lefkada island to Kerkyra. Depending on the season though, these itineraries are more or less frequent, so make sure to check in advance.

Things to know about Corfu’s name

Kerkyra’s Greek name comes from ancient Greece. Korkyra was a beautiful nymph who caught the Greek god Poseidon’s eye. He kidnapped her and brought her to the island, where their union produced a son, named Phaiax. Phaiax became the island’s first ruler and the people living there were called Phaiakes, while the island was called Kerkyra in the Doric dialect. That’s why even today, Kerkyra is often referred to as the “island of the Phaiakes”.

Kerkyra’s Venetian name Corfu is also derived from the Greek language! Corfu means “tops” and it comes from the Greek word “koryphes” which means the same. Kerkyra’s mountain has two peaks, called “Koryphes” and that’s how the Venetians got to call the island Corfu.

Things to know about Corfu’s history

Kerkyra is mentioned in Homer’s Odyssey, as it is the island where Odysseus was washed up and given hospitality before finally returning to Ithaca. The island was a very important commercial hub used by the Phoenicians and later on, was a steady ally of Athens throughout the Peloponnesian wars. The island was then attacked and conquered by the Spartans, then the Illyrians, and then the Romans, who allowed it autonomy.

During medieval times, the island was a prime target for all kinds of pirates, which resulted in many fortresses and fortifications being built. Eventually, the Venetians conquered Corfu and unsuccessfully tried to convert the population to the Catholic faith, so the dominant religion remained the Greek Orthodox faith.

When Napoleon Bonaparte conquered Venice, Corfu became part of the French state and despite assorted hurdles, remained so until 1815 when the British conquered it. Corfu is one of the few Greek areas that were never under Ottoman Turkish rule, yet still supported the Greek War of Independence. Along with the rest of the Ionian islands, Corfu was finally annexed by Greece when the British gifted the area to the king of Greece in 1864.

During WWII, great damages were done to the island through bombing and the occupation of the Germans, but everything was restored post-war.

What Corfu is famous for

Gorgeous beaches and nature in general: Like many of the Ionian islands, Kerkyra boasts a combination of the beauty of the Greek Mediterranean as well as a touch of the Caribbean in all of the beaches and seasides around the island.

There is also the stunning Agni Bay, and Cape Drastis to experience dramatic natural formations together with the great beaches there.

The town and architecture in general: From the castle town that is Kerkyra’s main town to Vlacherna Monastery and the several churches to be found scattered around the island, the Venetian and Greek fusion that is the island’s iconic architecture is bound to charm you. The Old Town is actually a UNESCO World Heritage site.

Of course, you also shouldn’t miss paying a visit to Acheillion, the royal palace built by Austrian Empress Elizabeth (Sissi) who chose Kerkyra as her refuge from her burdensome life. Definitely also visit Mon Repos, which was the Greek royal family’s summer house before, and even earlier, the British Commissioner’s main domicile.

The awesome Corfu food: Corfu is famous for its local delicacies, a wondrous fusion of Mediterranean cuisine and Venetian explorations.

Many would argue that of all of Corfu’s wonders, it’s the food that is the best, and that is saying a lot!

Make sure you sample several of the iconic Corfu dishes, such as Pastitsada, Sofrito, Fogatsa and Pasta Flora! Everything is cooked using fresh, often strictly local, ingredients and herbs, promising a unique culinary adventure for when you wind down from your tour of the island sites and vistas.