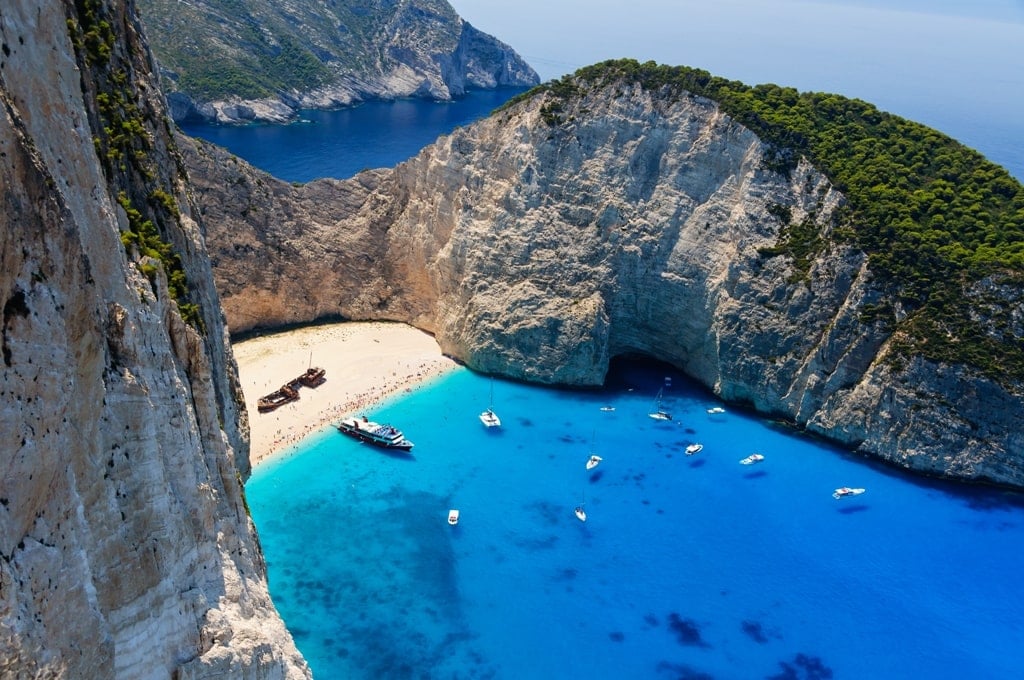 Zante is another name for the beautiful Ionian island of Zakynthos. The Venetians called Zakynthos Fiore di Levante, which means “the flower of the East” and they were right!

Zakynthos is a gorgeous island full of rolling, lush green hills, and sparkling beaches, some of them renowned around the world, like the famous Shipwreck Beach with the bright light sand, azure transparent waters, and unique craggy surroundings that make it exotic and exclusive at the same time!

Zakynthos is the southernmost island of the Ionian Islands cluster, situated on the western side of Greece, in the Ionian Sea.

Getting to Zakynthos is easy! During summer, you can fly directly to the island from various countries. During the off-season, there are flights to Zakynthos from the Athens or Thessaloniki airports.

You can also take the ferry to Zakynthos, by driving to the port of Killini on the western side of the Peloponnese. During the summer season, you can get ferries from the other Ionian islands to get to Zakynthos as well.

Things to know about Zante’s History

Zakynthos and its name are ancient! The one who first mentions it is Homer in the Illiad and the Odyssey. He mentions that the island got its name from Zakynthos, the son of King Dardanos of Arcadia who migrated to it with his men. Zakynthos participated in the Trojan war with several ships and sent suitors to Penelope when Odysseus was considered dead.

Zakynthos remained a point of contention and a coveted beautiful trophy of an island for both sides of the Peloponnesian War, and likewise for Roman conquerors, for the Ottomans and then the Venetians in the 1400s.

During WWII, Zakynthos was one of the islands that managed to protect and salvage its entire Jewish population from the Nazis, with the cooperation of the Mayor and the Bishop of Zakynthos at the time!

The heavy and frequent rainfalls of the winter and spring are what keeps the island so lushly green, that it was called ‘wooded’ during medieval times.

What Zante is famous for

Its gorgeous beaches and the Caretta-Caretta turtles: Combining the traditional Greek and the Caribbean-style exotic beauty, Zakynthos’ beaches are often prominent in international lists of must-see, must-visit seasides: rich sandy golden and white golden hues merge with aquamarine, sparkling, crystal clear waters. One of the most famous beaches in Zante is Navagio Beach (Shipwreck Beach) with one of the most famous shipwrecks in Greece.

Zakynthos’ beaches are famous not only for their unmatched beauty but also for the capacity to do various extreme sports thanks to the craggy, unusual rock formations that feature around many of them: from flyboarding to parachuting to sub winging, you will be able to do it in Zakynthos!

Just make sure you don’t overstep: areas on various beaches are cordoned off, to protect the Caretta-Caretta turtles that come to Zakynthos to lay their eggs. If you like preserving and participating in the wondrous life cycle of the protected Caretta-Caretta turtle, you can join the volunteer groups of Zakynthos and help little hatchlings make it safe to the sea!

The architecture: A beautiful mix of a romantic turn of the century neoclassical, medieval Venetian, and traditional Greek architecture awaits you! Walk along with beautiful marble and stone paths of the main town and villages, enjoy the Venetian castles with breathtaking views, and visit the gorgeous churches with the iconic belltowers.

The local cuisine, the epitome of the Mediterranean diet:  In Zakynthos, the oil production is abundant, with local olive trees giving the local cuisine its trademark olive oil base. Local delicacies, cheeses, and dishes that you won’t find elsewhere are there to enjoy. Taste the characteristic local cheese ladotyri and wash it down with the local fragrant wine Verde, as you wait for the delicacies of stews and pies. Then savor the local sweets, made of honey, semolina, or egg whites and boasting textures you won’t easily find elsewhere while you enjoy the nature and vistas surrounding you!

2 thoughts on “Where is Zante?”